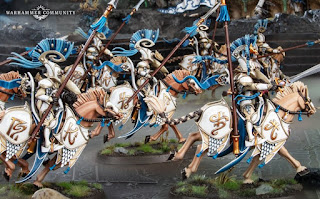 The Lumineth Realm-Lords are getting another preview, so lets take a look at what Vanari Dawnriders are and just how the miniatures look.

via the Warhammer Community
https://www.warhammer-community.com/2020/02/24/at-the-speed-of-lightgw-homepage-post-1/

The Lore
First and foremost, the Lumineth are an incredibly sophisticated and martial race of aelves. Yet much of what they know was taught to them by Teclis, who was once a Prince of Ulthuan in the world-that-was, alongside his twin brother, Tyrion. The High Elves of that long-lost time rode the finest horses in all the world, and a kernel of this glorious past yet lingered in the ancestral memory of the Lumineth. The Vanari Dawnriders represent a Hyshian reflection of that legacy, inspired by the teachings of Teclis, who knew first-hand the quality of the horse-riding cavalry and sought to encourage its replication among the Lumineth. 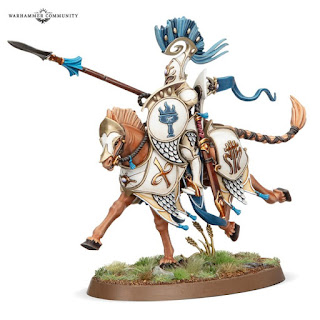 The Miniatures
Neil Langdown, the miniatures designer responsible for the Vanari Dawnriders kit, ensured that the horses appeared at full gallop. To create this effect, each model was designed with a single hoof on the ground, framed by a fully extended leg to either the front or rear to amplify the sense of motion. Neil also angled each steed to be slightly off-kilter, with its head tilted to add life and movement. He opted to design braided tails, not only to lend the steeds themselves a more aggressive feel, but to reinforce their swift appearance with tails whipping in the wind in the horses’ wake.

The Vanari Dawnriders were intended to fulfil the role of medium-weight cavalry. To that end, Neil designed the knights themselves to wear plate-armoured tassets, greaves and sabatons. However, he decorated their less vulnerable areas with angular tabards of scale mail or simple robes to reinforce their balance between speed and durability. Each Dawnrider also carries a curved shield, the shape of which implies that it would be used to deflect incoming blows while moving at at speed rather than to parry them directly.

Neil equipped the Dawnriders with the traditional knightly weapon of a long lance, but the kit offers a variety of tilts that represent different stages of the charge.* He added a lance bucket** and cavalry sword to the straps hanging from their ornate, high-backed saddles to show the well-equipped and opulent nature of the Lumineth Realm-lords. 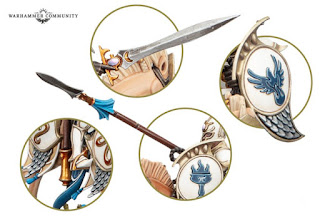 As with the Vanari Auralan Wardens we introduced in part 2, runes are heavily prevalent on Dawnriders. Not only does a large rune feature on each quarter of the barding, but Neil added the full runic mandala at the top of their banner.

The icons on the unit’s shields, however, are intended to be something more akin to the personal pageantry of the knight carrying them. These often include stylised sun and phoenix symbols – though formally centre-aligned between the Hyshian gods, a more militaristic, Tyrionic influence is clearly prevalent. This is further emphasised by the majestic phoenix design on the Dawnriders’ fluttering banner, though Neil also ensured that Teclian moons were commonplace on the miniatures to maintain the balance between the two Lumineth deities. 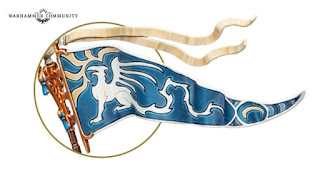 It won’t be long before your Vanari Dawnriders are galloping majestically across the battlefields of the Mortal Realms, ahead of your glittering phalanxes of Vanari Auralan Wardens.