The Talons of the Emperor are Coming! 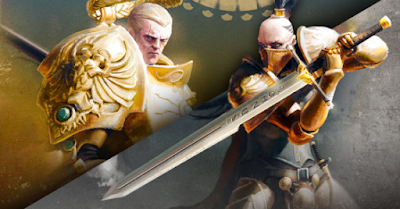 The Adeptus Custodes and Sisters of Silence will be playable in a single faction, the Talons of the Emperor!

Here is the latest on Valerian and Aleya!

Valerian and Aleya, the stars of Chris Wraight’s Watchers of the Throne series, have been realised as stunning new miniatures for the Black Library Celebration on Saturday. Not only that, but they’re getting exclusive Warhammer 40,000 rules, too. That being the case, we thought we’d treat you to a sneak peek at what they’re like in the game… 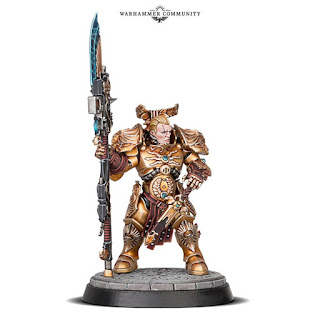 As a Shield-Captain of the Adeptus Custodes, Valerian is a mighty warrior, and a match for many of the most powerful heroes in the Imperium. His profile is enough to make his enemies weep!

Valerian is never parted from his masterwork guardian spear, Gnosis, which strikes even harder than other weapons of its kind for a whopping total of Strength 7 in melee! Send him into the thick of the fighting alongside a unit or two of his fellow Custodians and they’ll reliably slaughter everything in their path.

Valerian’s auramite armour is crowned with a golden wreath of laurels, presented to him by none other than the Lord-Commander of the Imperium, Roboute Guilliman, for his valour in battle. Yet the Golden Laurels are far from merely decorative – in battle, they offer Valerian a handy re-roll to use once during the battle. 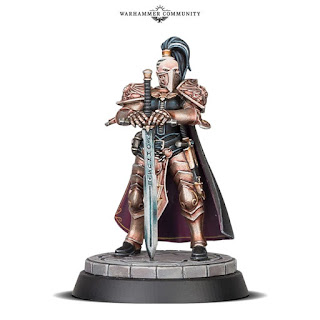 A veteran warrior of the Adeptus Astra Telepathica, Tanau Aleya is an incredibly formidable swordswoman and has the honour of being the first Character hailing from the Silent Sisterhood in Warhammer 40,000!

Aleya wields the Somnus Blade, an executioner greatblade with which she has slain countless enemies of the Emperor. But against psykers – her quarry of choice – she’ll be even more lethal.

As a Sister of Silence, Aleya’s mere presence is anathema to enemy psykers, and this effect is amplified further when in the company of her fellow Null-Maidens. If you’re facing a powerful psychic threat, supplement Aleya with a few squads of Prosecutors, Witchseekers or Vigilators to shut down your opponent’s Psychic phase.

Talons of the Emperor
Valerian and Aleya have fought alongside one another under some of the most desperate circumstances. They must be set up at the same time, but are otherwise free to separate and take the fight to wherever they will be most effective.

While we’re on that subject of the Talons of the Emperor, allow us to briefly explain who they actually are (or were).

More than 10 millennia ago, during the Great Crusade, the Legio Custodes and Silent Sisterhood fought alongside the Master of Mankind Himself, acting as both the left and right ‘Talons of the Emperor’. Yet since the Horus Heresy, both warrior orders have trodden very different paths. With the exception of the odd secret mission, the restructured Adeptus Custodes found themselves largely restricted to Terra, guarding the Emperor’s Palace. Meanwhile, the Sisters of Silence were functionally disbanded as a separate fighting force, reduced to accompanying the Black Ships of the Adeptus Astra Telepathica to battle rogue psykers and ensure the Imperial Tithe was adhered to.

Yet when Tanau Aleya accompanied Roboute Guilliman back to Holy Terra during the climactic events of the Gathering Storm, Sister of Silence and Custodian Guard would end up fighting alongside each other once more. Upon taking up the mantle of Lord-Commander of the Imperium, Roboute Guilliman issued new orders, reforming the Talons of the Emperor and sending them to the forefront of Mankind’s battles once more as invaluable warriors of his Indomitus Crusade.

If you’re up to speed with all the latest rules developments in Chapter Approved 2019, you’ll notice that, by only having the Imperium Faction Keyword on their combined datasheet, Valerian and Aleya cannot currently join an Adeptus Custodes Detachment without the latter losing their Battle-forged bonus. However, you need not worry, for it won’t be long before both factions will be able to fight as one once more, when the Talons of the Emperor join the epic battles of the Psychic Awakening…