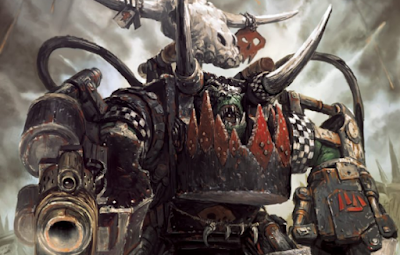 Yes we have been waiting for the new miniature and today we are getting a preparation for it with a little lore and background on just where and who this massive beast has fought.

via the Warhammer Community
https://www.warhammer-community.com/2020/02/24/ghazghkulls-back-and-hes-spoiling-for-a-fightgw-homepage-post-2/

Behind every great grot, there is a massive Ork encouraging him (with a steel-capped boot). Yes, we’re talking about Ghazghkull here! He’s back, and we’re taking a look at the enemies that he’s acquired over the years. 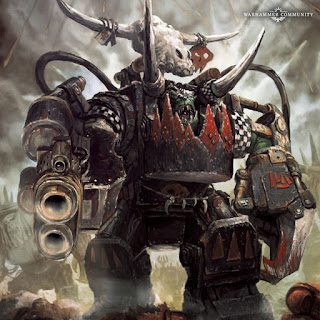 As one of the biggest and baddest Warbosses ever, Ghazghkull Mag Uruk Thraka* has developed quite the list of enemies, all desperate to put an end to the so-called prophet of Gork and Mork and his Waaagh! 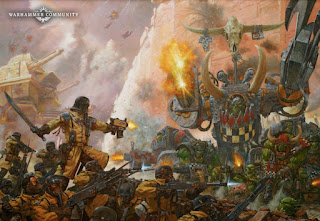 Ghazghkull first encountered Commissar Yarrick during the Second War for Armageddon. Having swept across the world, Ghazghkull came to Hive Hades, where Yarrick was commanding the Imperial forces. Time and again, the Orks attacked. Time and again, they were repelled. Meeting in the centre of the maelstrom, the two heroes finally met, with Ghazghkull leaving Yarrick close to death. However, the Commissar had bought enough time to evacuate the Hive, and his victories had changed the course of the war. Eventually, Commander Dante and the Blood Angels arrived and drove the Orks from the surface of the planet.

Years later, Ghazghkull led an invasion of the planet Golgotha and Yarrick came out of retirement to put a stop to his nemesis. It wasn’t to be, as the Ork captured the Commissar and, rather than killing him, told him of his grand plan – Ghazghkull was going to return to Armageddon and he wanted Yarrick to lead the defences so that it would be a proper scrap. Since then, Yarrick has vowed to cleanse the galaxy of the menace of Ghazghkull once and for all. 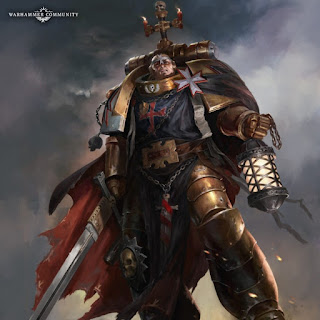 Returning as promised to Armageddon at the head of an even greater Waaagh!, epic battles were fought and a heroic defence brought the war to a protracted stalemate. Unable to strike the decisive blow, Ghazgkhull soon grew bored. He began to have visions and realised that Gork and Mork had a grander purpose in mind for him, so he left the planet, pursued by Commissar Yarrick and High Marshal Helbrecht of the Black Templars. Just when they thought that they had him cornered in the Haunted Gulf, Ghazghkull’s flagship Kill Wrecka disappeared in a blaze of green energy. Helbrecht’s crusade to end the green menace was back to square one. 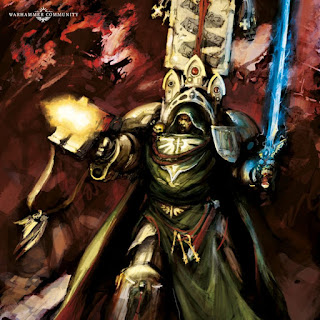 He might be the Grand Master of the Deathwing these days, but when he first encountered Ghazghkull, Belial was Master of the Third Company of Dark Angels.** They faced each other on the planet Piscina IV, where the Dark Angels fought a desperate rearguard action until reinforcements arrived. While the sons of Caliban may have won the battle, the war for Piscina IV continues. Ghazghkull remains one of the few to ever best Belial in close combat – the Grand Master knows that he was lucky to survive, and such memories fuel his dreams of vengeance. 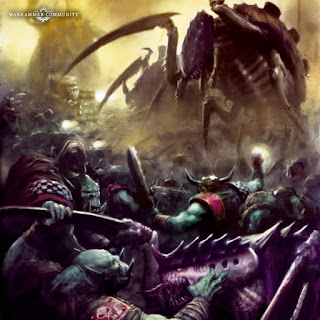 The benevolence of Gork and Mork saw Ghazghkull eventually reappear in Octarius, where the Overfiend was engaged in a massive conflict with the Tyranids of Hive Fleet Leviathan. Taking matters into his own klaw, Ghazghkull soon took charge of the situation and led the Orks in a wave of destruction. Then the unthinkable happened – Ghazghkull was swallowed whole by a Mawloc! That would have been the end of most Orks, but Ghazghkull isn’t most Orks. He tore his way out of the Mawloc, issuing a rallying cry to the greenskins and resuming his krumping of any Tyranids that got in his way. The Hive Mind had learned about a dangerous threat – it won’t underestimate Ghazghkull next time. 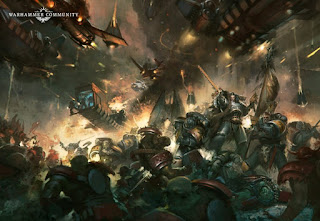 On the planet of Fenris, the Rune Priests of the Space Wolves have been ravaged by visions of pain and death. They saw a great green pyre spreading between the stars, and by casting the runes, they could only come to one conclusion – the Orks were becoming more united. It didn’t take them long to realise that there could only be one Ork behind this – Ghazghkull –  and take an oath to stop the murderous Warboss’ rampage. It will be a battle worthy of song.

The next Psychic Awakening book, Saga of the Beast, will centre around the Space Wolves’ attempts to finally end Waaagh! Ghazghkull, and you’ll be able to pick it up next month.