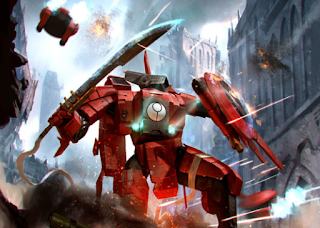 Today we are getting a look into the Hero of the Tau Empire, Commander Farsight. There is a new book from Phil Kelly called Farsight: Empire of Lies. here is a look at it. 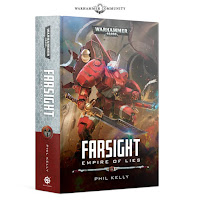 The T'au Empire has long been plagued by the brutal orks – and Commander Farsight will see them destroyed. As his obsessive war against the greenskins escalates, other forces are at work, driving Farsight to an encounter that will change his view of the universe, the T'au Empire… and himself.


via the Warhammer Community
https://www.warhammer-community.com/2020/02/19/commander-farsight-the-novels/

Commander Farsight is one of Warhammer 40,000’s most fascinating characters, and the latest chapter of Phil Kelly’s in-depth exploration of him through Black Library novels is out now. Today, we’re taking a look at Farsight and Phil’s stories – so let’s start with just who he is.

Commander Farsight
O’Shovah – better known as Farsight – was once the undisputed hero of the T’au Empire. He led the forces of the fire caste to victory after victory, against impossible odds, and earned the respect of allies far and wide. After a mysterious encounter on the artefact world of Arthas Moloch, Farsight turned against the ethereals and founded a breakaway enclave dedicated to pursuing the Greater Good in his own way. With his elite warriors – who along with him form “the Eight” – by his side, he has spent many times the normal t’au lifespan fighting. This is thanks to his Dawnblade, a mysterious sword that keeps him going. With it, he shows no sign of slowing down.

Farsight is, of course, a mighty hero for T’au Empire armies in Warhammer 40,000, and you can even get full rules for using the Eight in the latest Psychic Awakening book!

The Novels
Phil Kelly began telling Farsight’s story in the aptly titled novella Farsight. This tale details one of O’Shovah’s earliest commands – and greatest victories. On the world of Arkunasha, deadly storms and an army of orks that seems to keep growing no matter how many are killed threaten to overwhelm the T’au Empire garrison. It falls to Farsight’s tactical genius to find a way to turn the planet against the greenskins and win the day.

This novella is a perfect starting point, contrasting the young firebrand commander against his fire caste peers and showing how his grasp of strategy and personal bravery are key ingredients in his success.

The story continues in Farsight: Crisis of Faith, where the legendary commander encounters the armies of the Imperium for the first time. Faced with forces that combine an endless flow of troops with incredibly dangerous elite warriors – the Space Marines – and all manner of esoteric weapons the T’au Empire doesn’t understand, Farsight must marshal all of his skill and insight into defeating this mighty foe… even if it costs his soul.

As well as battles against the Imperium, Crisis of Faith explores the T’au Empire itself and Farsight’s relationship with the different castes, including the mysterious ethereals. It’s a great set-up for the story that you know is coming…

The latest chapter in O’Shovah’s tale is Farsight: Empire of Lies. This pits the commander against his old enemies, the orks, once more