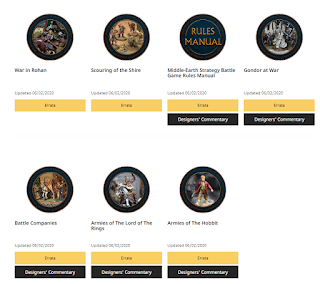 Its time for some updates to Middle Earth! New FAQs and Errata are out!

via the Warhammer Community
https://www.warhammer-community.com/2020/02/06/middle-earth-faq-update-february-2020fw-homepage-post-2/

This version of the FAQs and Errata covers all of the current publications, and we thought we’d take some time to talk through the significant changes and why we made them.

Removing Siege Engines
Currently in the Strategy Battle Game, when a Siege Engine is destroyed, it remains on the table as a piece of impassable terrain. This caused a few strange situations where a destroyed Siege Engine could block off areas of a battlefield more effectively than a wall! This didn’t make much sense. Some tricksy players even began placing their Siege Engines onto objectives, meaning that when it was destroyed their opponent could never get to the objectives in question! Whilst this is undoubtedly a level of sneakiness worthy of Gollum himself, it’s certainly not how the rules were intended to work, so we’ve made one simple change.

Now, when a Siege Engine is reduced to 0 Wounds, it is simply removed from the battlefield. The likelihood is that it has been completely destroyed anyway, and we felt this was the simplest solution.


Shades
Ah Shades… the bane of many a player on the top tables of a Middle-earth tournament! These twisted, malign spirits have always been a popular choice with gamers due to their special rule allowing them to reduce the Duel roll of enemy models within range. Whilst we feel that this rule fits the background of the Shade, rather than seeing them in Angmar lists we are seeing these spirits included with almost every Evil army going.

To rectify this, the wording on the Shade’s Chill Aura special rule has changed. Now, all models (friend and foe) will be subject to the Shade’s Chill Aura – however, friendly models with the Angmar keyword will be unaffected. Shades will still be a strong choice, but it should mean that they will be seen mainly as part of Angmar armies where they belong thematically!


Alliances
Perhaps the biggest alteration in this update is the change to Alliances. We’ve noticed that a lot of armies are being made up of multiple allied contingents. However, many of these contingents are being led by Heroes who would not be natural leaders in order to drop a powerful effect or unit type into an army, with no real thematic reasons to do so and no actual leader to bring the warriors with them! The likes of Shades, Círdan, Lake-town Militia Captains and Alfrid are all examples of this – none of them would be the leaders of a force that would then ally with another army.

So, to help encourage more thematic alliances, we have made a small change to how they work. Now every allied contingent must have at least one Hero with a Heroic Tier of Hero of Valour or higher – with the exception of the Wanderers in the Wild, of course!

Changing this rule should help stop armies simply being made up of multiple Warriors and low-tier Heroes that do not fit together thematically – without taking the leaders of their armies. This will help to have armies and forces that accurately represent those from Tolkien’s world.


Kings of Middle-earth
With the previous changes in mind, we felt that a few Heroes needed a change in Heroic Tier. Kings of Men, Dwarf Kings, Mahûd Kings and Haradrim Kings have all been increased to Heroes of Valour, giving players a few more options when they are deciding which allies to use.


We are confident that these changes, and the others we have made, will make for even more exciting battles!
2/06/2020
Natfka
FAQ's and Errata, Middle Earth Strategy Game