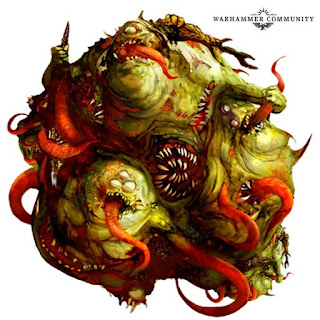 The Blackstone Fortress is getting it's No Respite expansion in the next couple days. Here is a quick preview of what to expect from gameplay.

via the Warhammer Community
https://www.warhammer-community.com/2020/02/13/no-respite-purging-the-plaguesgw-homepage-post-1/
To stop the spread of disease and save Precipice, your explorers must undertake the quest to end the plagues.* The plan? Destroy the three Nodes, take on the Shrine, save Blackstone Fortress and then head back to your ship for a glass of amasec. Each Node is the locus of a specific plague and if you fail to destroy them during an exploration, they become even deadlier. Each plague has six stages and if any reach stage 7 (Nurgle’s sacred number) the quest is failed. This means that the clock is always ticking, adding a sense of urgency to every exploration.

You’re definitely going to want to take those Nodes out as soon as possible though. If the Chronopox, which is being brewed in the Node of Endings, reaches stage 3, your “luckier” explorers are going to feel the blessings of Grandfather Nurgle. 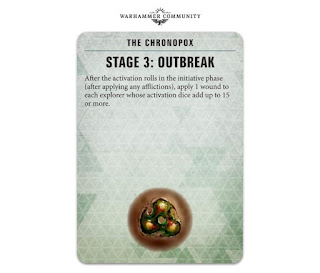 As if that wasn’t bad enough, it’s possible for your explorers to suffer from debilitating maladies as they come into contact with the plagues within the Blackstone Fortress. After any exploration that was a combat, each explorer rolls the Blackstone dice and whoever rolls lowest has to take an affliction card. These are incredibly bad news for your merry band of heroes. 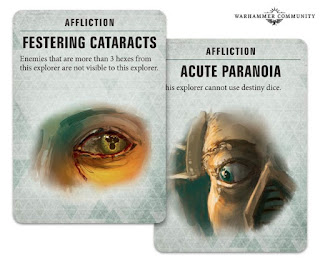 On top of all of that, there are new hostiles for your explorers to defeat in the form of Plague Marines and Poxwalkers.

The Heretic Astartes are just as tough as you’d imagine, with 5 wounds and bringing new weaponry, including the lethal Blight Launcher. 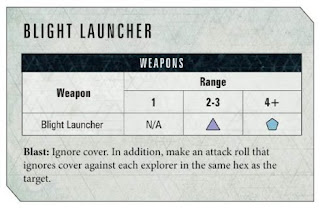 They also have a new unique action, Steady Advance, which means that no-one is safe from their implacable progress.

Individual Poxwalkers might not look like much of a threat but their unique behaviour table means that they will be almost constantly advancing towards your explorers and woe betide you if they start to Lurch.