Saga of the Beast is Coming Soon. Here are some hints to who is behind it. 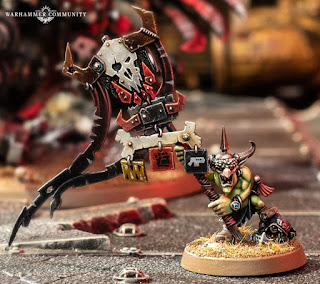 With only Valhallans listed for Made to Order this coming week, I was wondering what GW would be talking about today. Turns out its all about the the next Psychic Awakening book, Saga of the Beast. We fully expect a new Ghazghkull miniature to be released at some point and this will hopefully be it.

Lets see what GW is talking about this morning for the upcoming book.

via the Warhammer Community
https://www.warhammer-community.com/2020/02/17/da-gatherin-waaaghgw-homepage-post-3/

Da Past
There have been Ork Waaagh!s this big and disciplined twice before in the history of the Imperium. The first time was in M31, where Urlakk Urg’s Waaagh!, centred around Ullanor, threatened human space. It took Horus himself to bring down Urg, with the Luna Wolves Primarch battling the giant Ork in his own throne room before casting the body down from the battlements. In the wake of victory, Horus was named Warmaster of the Emperor’s forces, and nothing was the same ever again.

Some two thousand years later, an even bigger Ork led an even bigger Waaagh! against the Imperium. After colonising Ullanor, this Warboss, known only as the Beast, turned his vengeance on those who had slain Urg, almost wiping out the Imperial Fists Chapter, going toe to toe with Vulkan, the Primarch of the Salamanders, and unleashing one of his attack moons over Terra itself. Billions died, entire sectors were overrun and the Waaagh! was so powerful that the Orks under the command of the Beast grew bigger and more aggressive than any seen before. Eventually, only a desperate gambit on the world of Ullanor by the rebuilt Imperial Fists and the Sisters of Silence managed to end the largest Waaagh! ever seen. 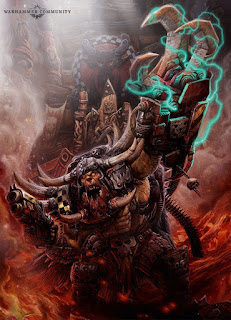 Da Present
All over the galaxy, the Orks are appearing in massive numbers, from Ceibhal to Leckides and from Gaivos to Brakhutos. Attacks on the Imperium have increased in both frequency and intensity. What’s more, these attacks are showing an un-Orky level of tactics and strategy, rather than just rushing headlong into the enemy. Whoever is commanding these Orks is an innovator and shrewd tactician, outmanoeuvring his enemies to exploit their weaknesses and avoiding carefully laid traps as if anticipating them in advance.

Wotz ’appenin’?
Who’s in charge of all of these Orks then? Surely it can’t be just one Warboss teleporting around to all of these different war zones, can it? Orks don’t have that technology! Maybe it’s a lot of different Orks, all pretending to be the next “Beast”, and a lot of names are being mentioned in relation to these stunt doubles – Wazdakka Gutsmek, Nazdreg Ug Urdgrub, Urgok the Unstoppable, the Arch-arsonist of Charadon and many more besides. But none of these Orks is kunnin’ enough to put together a Waaagh! of this size. The only thing for certain is that whenever this Beast has been spotted, he’s not been alone – he’s always accompanied by a Grot banner waver…