Spear Phalanxes of the Lumineth Realm-lords 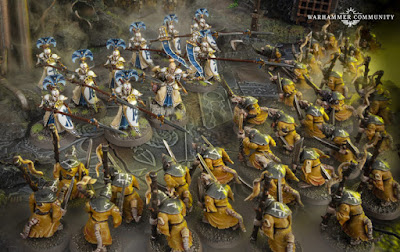 With the exception of the crests (which I would be removing) these miniatures are looking good. Here is a little about the the Lumineth Realm-lords and their spear phalanxes.


via the Warhammer Community
https://www.warhammer-community.com/2020/02/10/the-lumineth-lowdown-part-2-spear-phalanxes-and-runic-symbolismgw-homepage-post-2/#gallery-2

Who Are They?
The spear phalanxes of the Vanari Auralan Wardens are the mainstay of the Lumineth battleline. They fight with a synergy and grace that lesser races couldn’t even begin to fathom. While the arrows of the Auralan Sentinels and magical bombardments of their mages rain down upon their enemies, the Wardens stoically hold their ground, awaiting the desperate charge of their embattled foes.

Heartbeats before combat is joined, the sunmetal tips of the Wardens’ spears flare into life with the solar energies they have absorbed, tearing through armour, flesh and bone as their Wardens skewer their would-be attackers with thrusts of lethal precision. They are led by High Wardens, imperious Lumineth officers who stand at the rear of each phalanx. Easily identified by their decorative back-banners, the High Wardens direct the warriors under their command and channel the magic of Hysh into their enchanted weapons to the utter ruin of their enemies.


The Miniatures
As the Auralan Wardens fight as a phalanx, they have been designed in a variety of defensive poses, with leaf-shaped shields to the fore and long spears thrust forwards to face the enemy. Their shields each have a crescent-shaped nook, enabling the warriors to support the weight of their spear shafts and thrust their weapons forwards even when their shields are interlocked. The shields themselves are interchangeable and feature intricate woven lattice work on their unarmoured side, hinting at the incredible craftsmanship that is synonymous with everything the Lumineth create.

With the exception of triangular tabards of scale mail, the lower halves of the Wardens remain unarmoured – these areas of the body are protected by the interlocking shields of the phalanx. Meanwhile, the upper halves feature a mix of male and female torsos, each clad in layers of scale and plate armour with elegant, curved pauldrons. Their armour is bedecked with sun and moon icons, symbolising the twin gods of Hysh, for their warriors are neither Tyrionic nor Teclian exclusively. The interchangeable heads of the Auralan Wardens are protected by full helms and crowned with exotic plumes.


Each of the Auralan Wardens carries a short sword strapped to their backs. Though not designed to be their primary weapons, these blades would be drawn for self-defence should an enemy get inside their reach – or to extricate their spears should an enemy become kebabed on the shaft!

The Runes
To the Lumineth, runes are more than just a form of symbolism – they represent their way of life and are a fundamental part of their civilisation. In addition to serving as a type of language,* runes represent the higher forms of learning and enlightenment embodied by the Hyshian aelves. That the Vanari Auralan Wardens display runes so overtly on their shields only serves to reinforce that they are students of far more than just war.


Integral to this is the Runic Mandala, the Lumineth evolution of the Pantheonic Mandala which once depicted the aelven gods from the world-that-was. In addition to representing an amalgam of the runes of the four Hyshian geomantic spirits, the more elaborate versions incorporate the twin aspects of sun and moon, both separate yet intrinsically linked, just as with the godly twins that embody them.