Shadow and Iron- Psi Titans! What is the Adeptus Titanicus Book All About 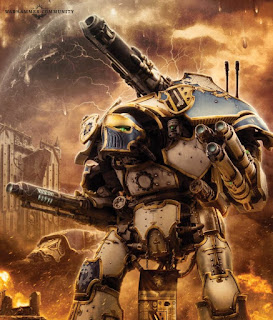 The new expansion for Adeptus Titanicus is coming to pre-orders this weekend. Here is what it is all about. 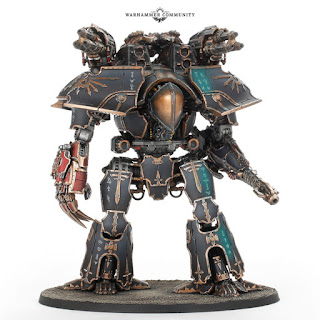 via on the Warhammer Community site
https://www.warhammer-community.com/2020/02/05/shadow-and-iron-crusades-of-vengeancegw-homepage-post-4fw-homepage-post-1/

A new expansion for Adeptus Titanicus is coming, and it’s going to take your battles into the realm of the Ultramarines, showcasing some of the bloodiest events of the Horus Heresy. Shadow and Iron is set during the twin campaigns known as the Shadow Crusade and the Crusade of Iron


The Shadow Crusade
In the wake of Calth, the Word Bearers and their comrades – including the World Eaters and many traitor Titan Legions – cut a bloody swathe across the Five Hundred Worlds of Ultramar, burning planets and massacring billions in an attempt to distract the Ultramarines and prevent them from marching to stop Horus’ advance on Terra. This Shadow Crusade will be familiar to fans of the Horus Heresy – the novel Betrayer by Aaron Dembski-Bowden explores it in depth, including some thrilling scenes involving the traitor Legio Audax, the Ember Wolves.

The Crusade of Iron
After the bloody battles on Calth, the remaining princeps of the Legio Praesagius came together and declared their own campaign of vengeance – the Crusade of Iron. Other loyal forces flocked to their banner, and battle was joined. On world after world, the True Messengers and their allies clashed with the traitors. As planets burned around them, hideous and terrifying weapons were unleashed, such as the Psi-Titans of the Ordo Sinister. The Loyalists fought to preserve the Ultramarian way of life, while the Traitors desired only to leave ruin in their wake.

Speaking of the Ordo Sinister, you’ll find the rules for the Warlord-Sinister Psi-Titan in Shadow and Iron. This mighty war engine is a terrifying presence on the battlefield, using its psychic abilities to move faster than you’d expect for a Warlord Titan while devastating enemies with bolts of shadow from its Sinistramanus Tenebrae. The Warlord-Sinister will be available to pre-order from Forge World on Friday.

Shadow and Iron
Shadow and Iron details the full story of the Crusade of Iron. You’ll discover how two loyal Legions were drawn into a treacherous trap on Ulixis, and fought a cunning battle in the midnight realm beneath the world. The book also gives you insights into the ambush on Espandor, where the Legios Praesagius and Oberon found the tables turned on them, with tragic consequences.

And these are just a taster of the mighty battles that unfold in the book – conflicts you can refight with five narrative play missions, alongside rules and background for six Titan Legions and six Knight Houses that fought in the twin crusades. And yes, these rules include the much-requested Legio Audax and their signature weapon, the Ursus Claw.