There are really some kickass models being released from Forgeworld revealed today. If I had not been up all night trying to win some games of Battlefleet Gothic Armada II I would of seen these much earlier. These necromunda sketches are awesome and I cannot wait to see them as models.

We’re not done with Battles in the Age of Darkness reveals just yet! We’ve just got a glimpse at some new White Scars models that’ll be coming out ahead of Malevolence – and they really are stunning.
First up, we’ve got two Praetors. Replete with a wealth of Legion-specific detail including furs, runes and barding, these models perfectly capture the unique character of their Legion. 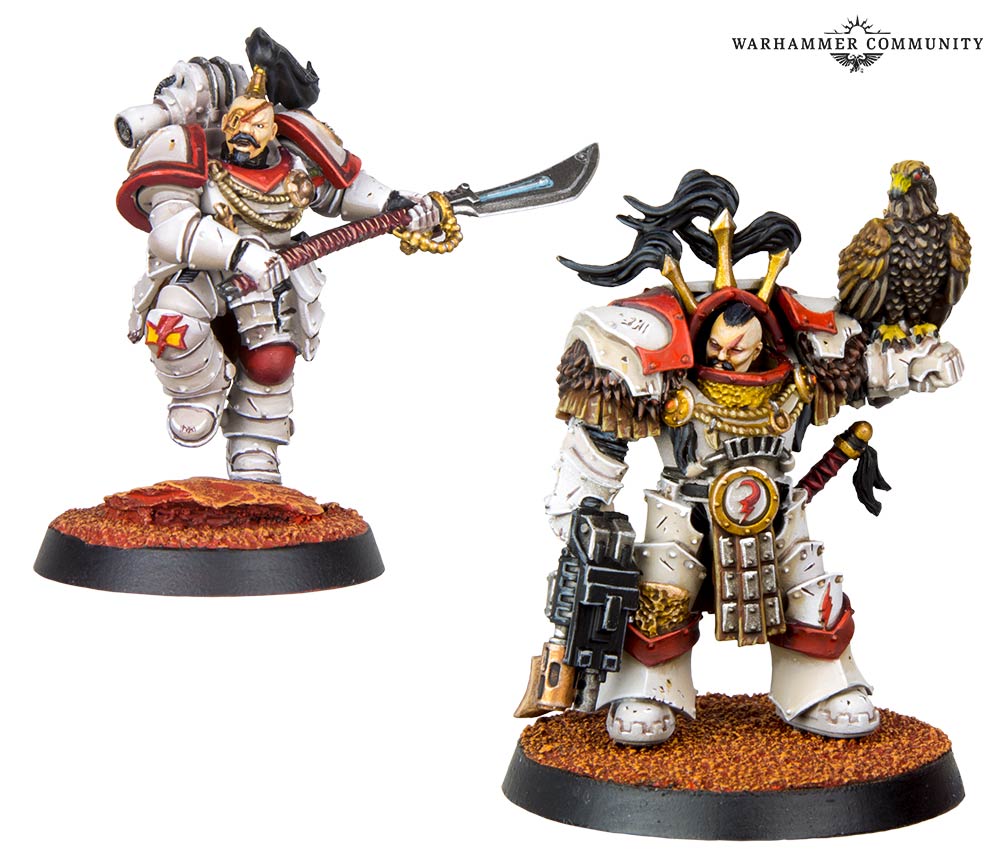 If you’re looking for a leader for your White Scars, you can’t go wrong with either of these guys!
We’ve also got a look at an incredible White Scars Contemptor Dreadnought and Leviathan Dreadnought. While Dreadnoughts are rare in this speed-loving Legion, there remain some battle-brothers willing to be reborn as one of these ironclad war machines. Indeed, we reckon being a Land Raider-sized armour-clad icon of death probably just about makes up for not being able to ride a bike anymore… 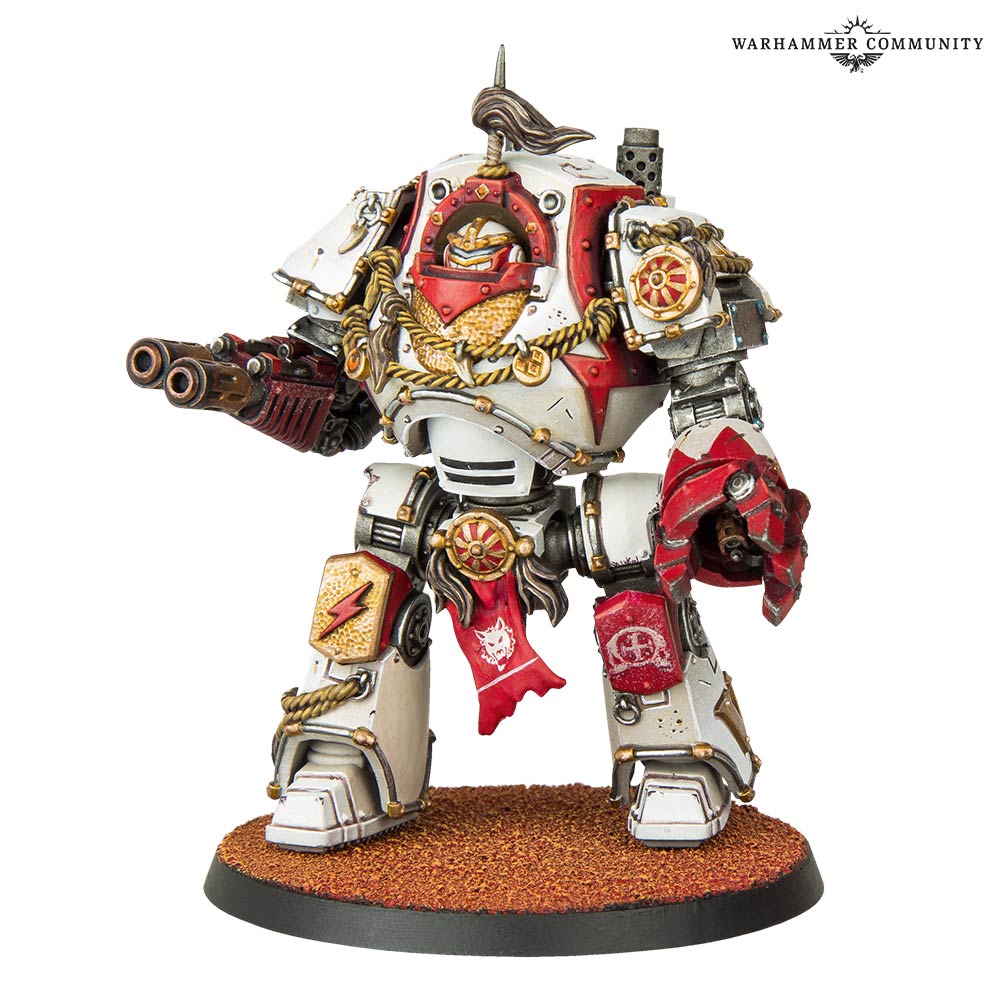 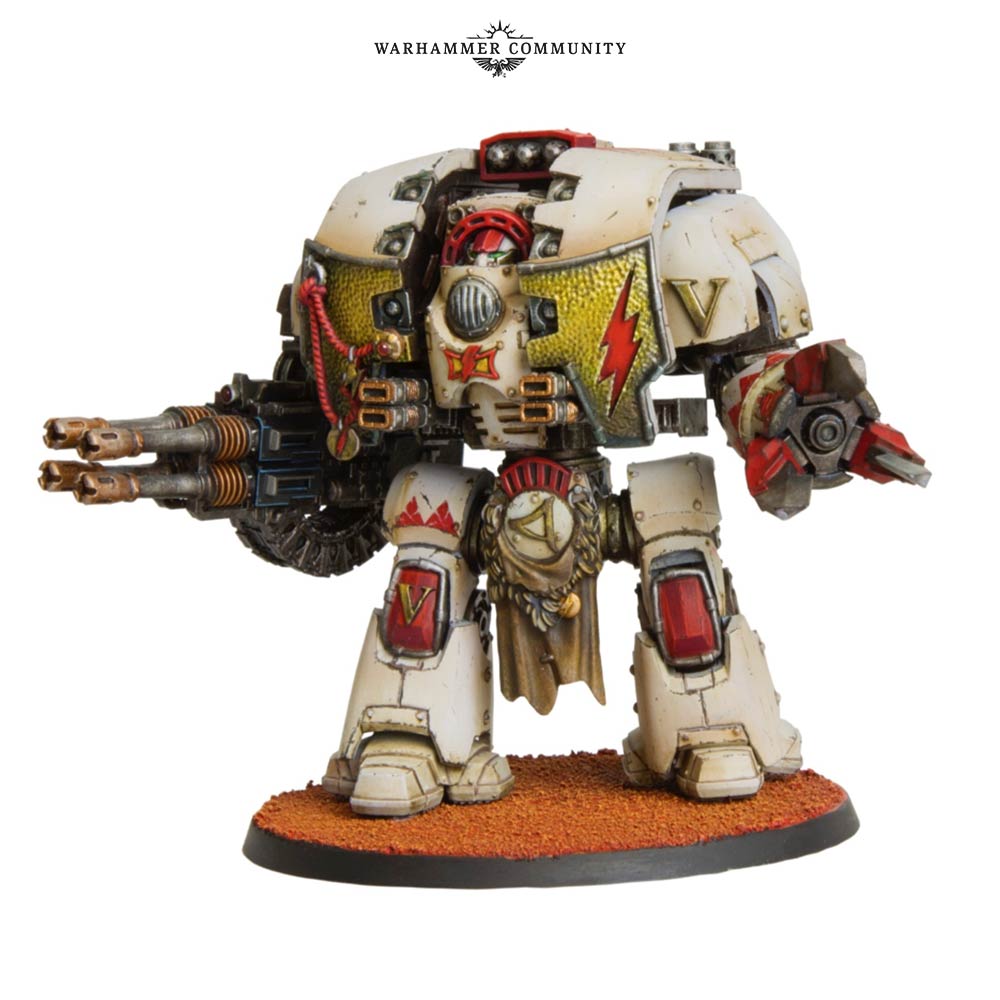 But if your Dreadnoughts can’t ride bikes, how will they keep up with your troops? Simple – you can just deliver them into battle with the re-designed, up-sized Dreadnought Drop Pod: 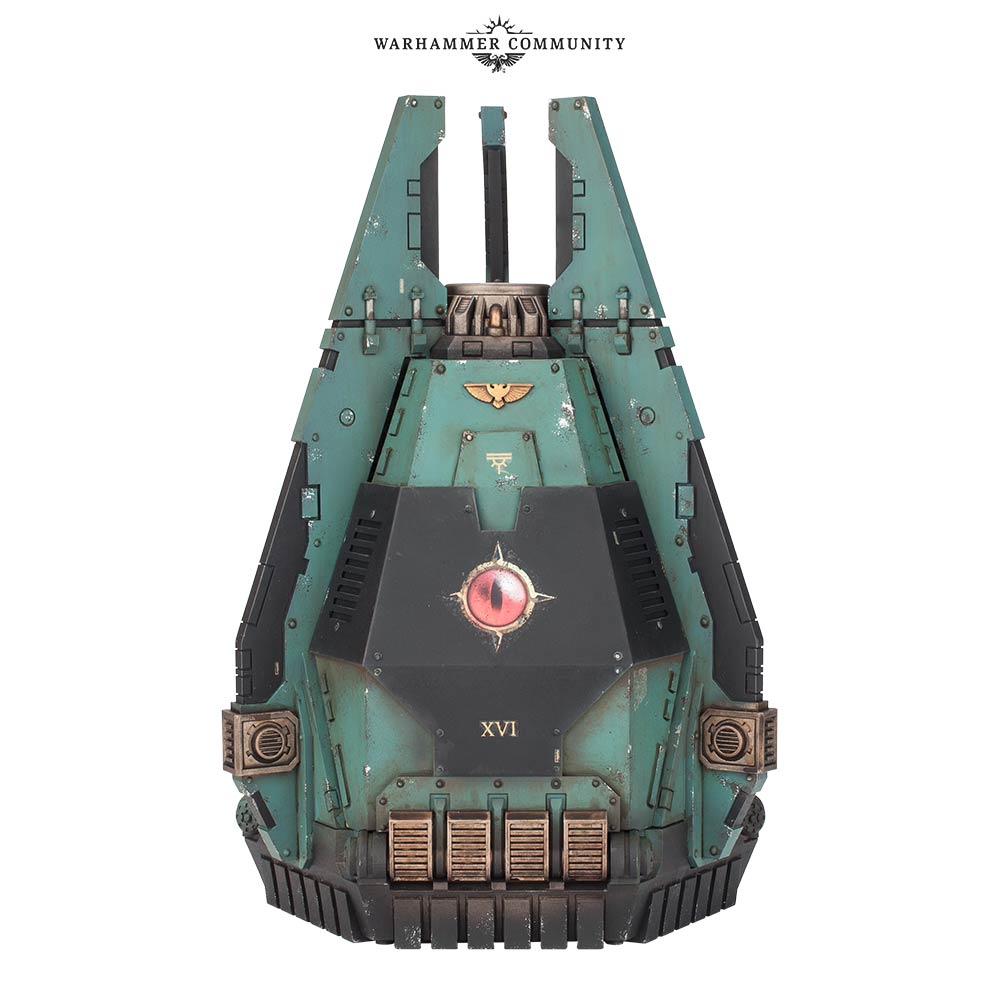 There’s more! We’ve also had our first look at Raldoron – a legendary hero of the Blood Angels who would go on to lead the Legion following the death of Sanguinius as its first-ever Chapter Master. 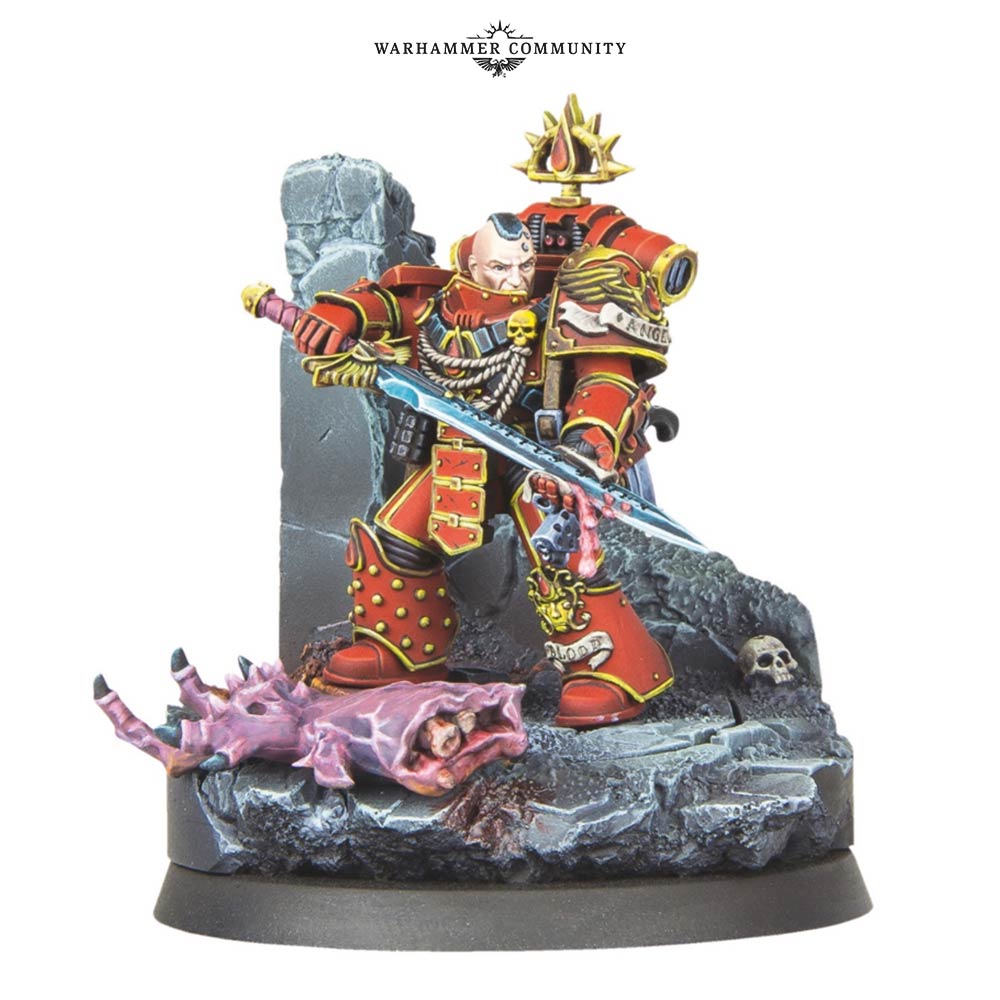 Of course, characters are a key part of the Horus Heresy, but so are terrifyingly huge war machines! Fans looking for those won’t be disappointed, with our first peek at the real, painted versions of two massive new engines of destruction. Meet the Mechanicum Acastus Knight Asterius and the Mechanicum Ordinatus Aktaeus. 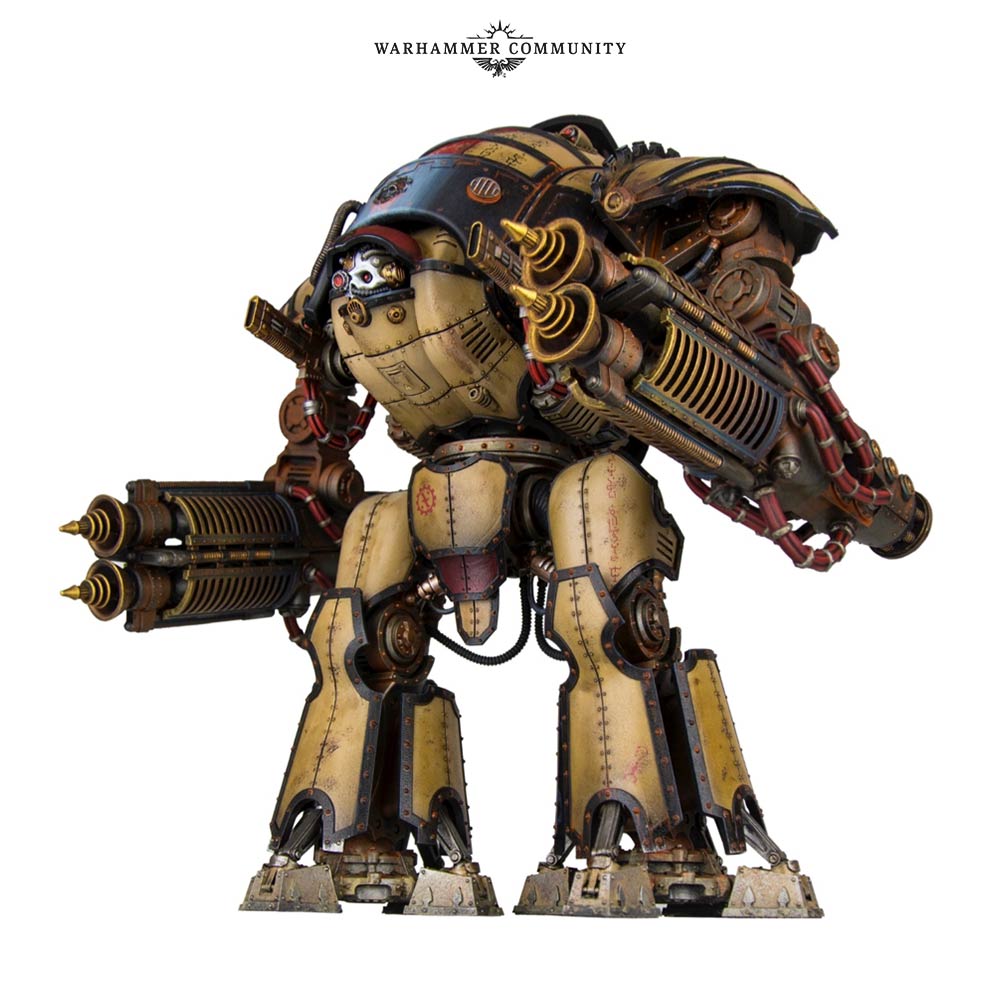 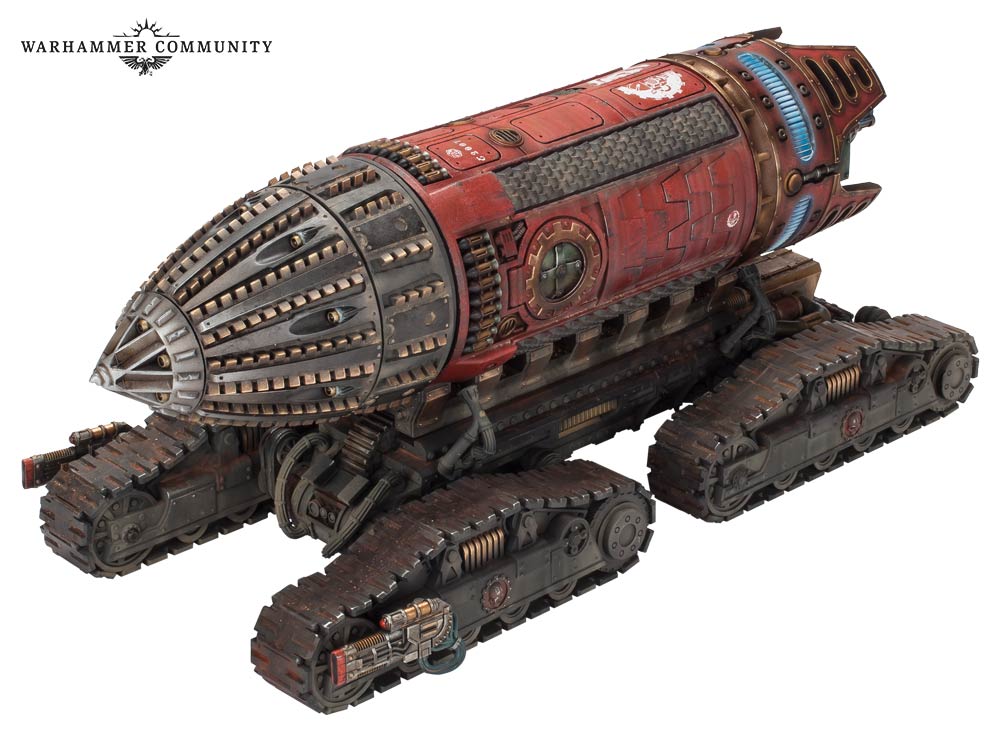 The designers were also kind enough to share some tantalising early concepts they’re working on, including unique White Scars Terminators and a Contemptor Dreadnought with a massive jump pack. Yes, really! 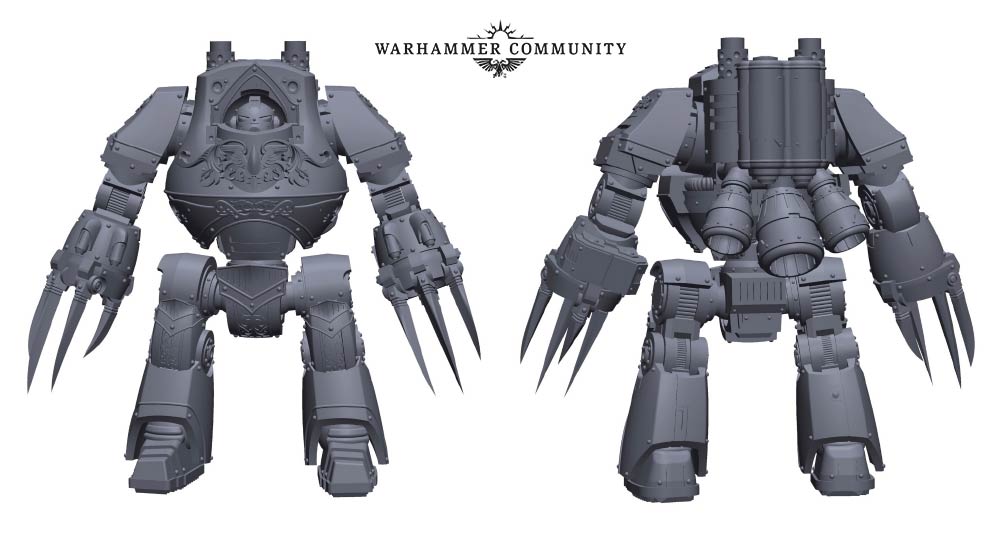 And that’s all we’ve got for Day 1 of the Horus Heresy Weekender – but we’re far from done yet! Check back tomorrow for more news and reveals…

While most of the Weekender has been about the Horus Heresy, but we’ve also learned of some exciting upcoming rules and models from the depths of Hive Primus…
First up, in the short run, you can look forward to even more Bounty Hunters to add to your gang. Deadly Guild mercenary Baertrum Arturos III brings a touch of class and refinement (and some deadly tech!) to your battles, while Ortruum 8-8 and Thaetos are powerful (and grotesque) Wyrds, capable of flaying opponents alive with deadly warpcraft. 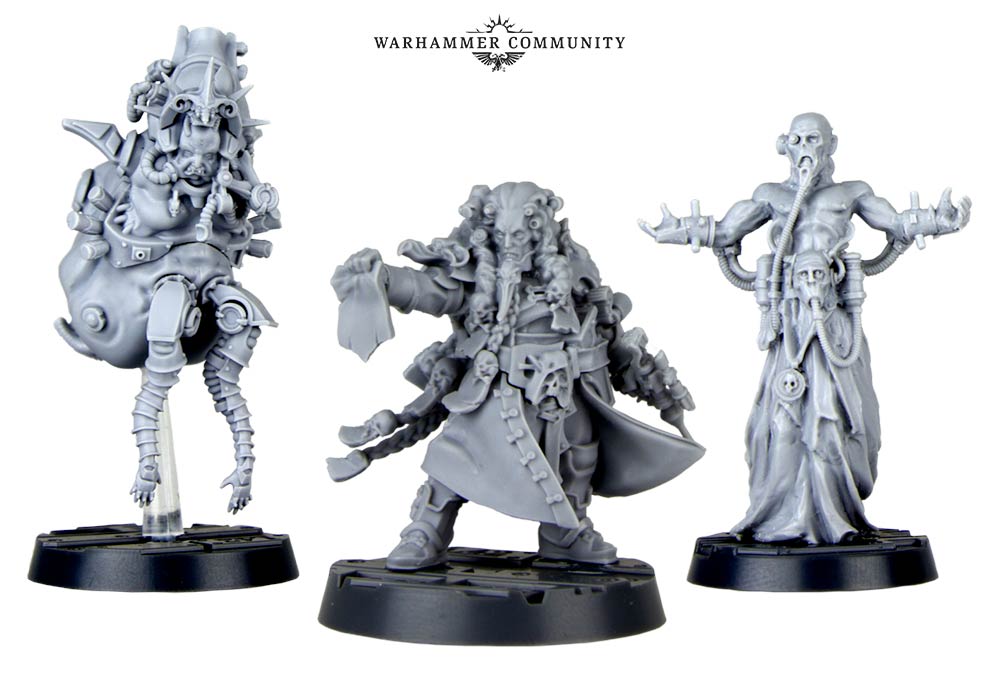 Less flashy (but more adorable) are the Bomb Rats – a deadly piece of wargear for House Cawdor gangs: 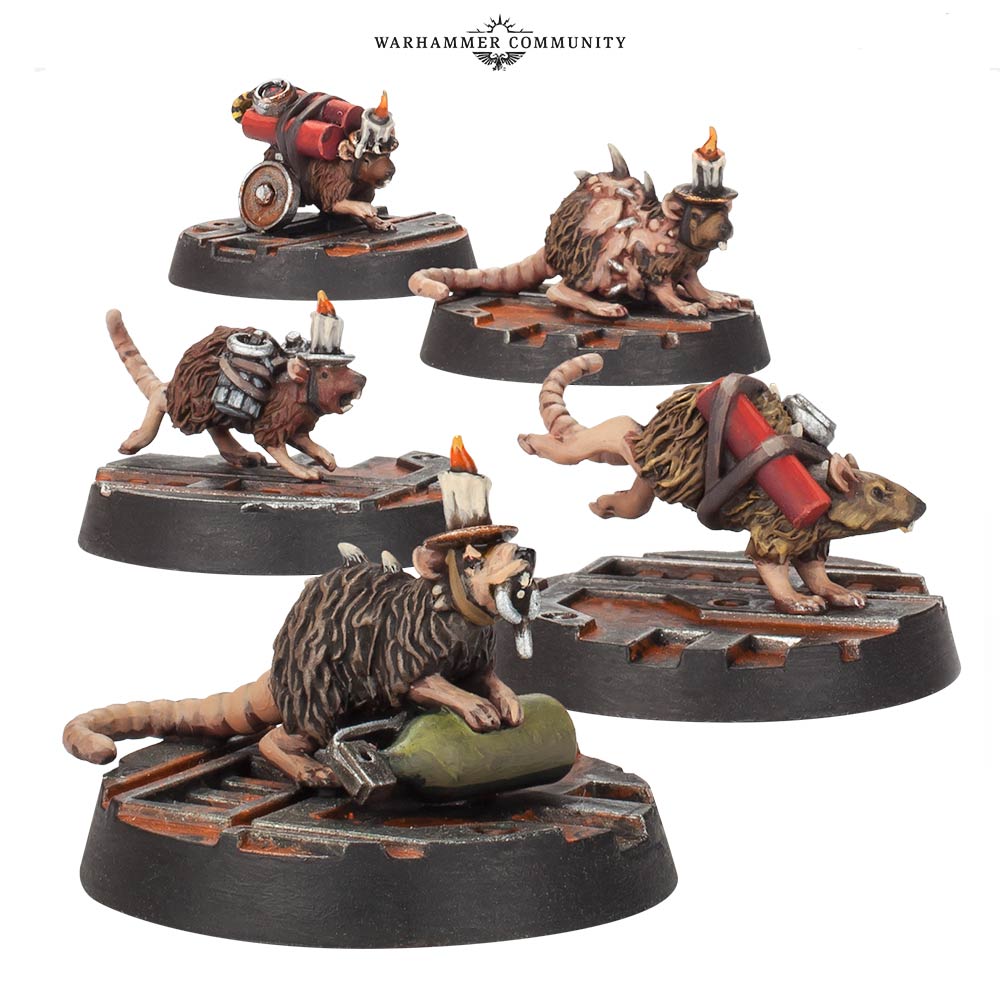 Delaque Gangs can also look forward to a number of new upgrade sets that’ll expand the arsenal of these insidious infiltrators – as well as giving them a stylish range of heads to choose from. 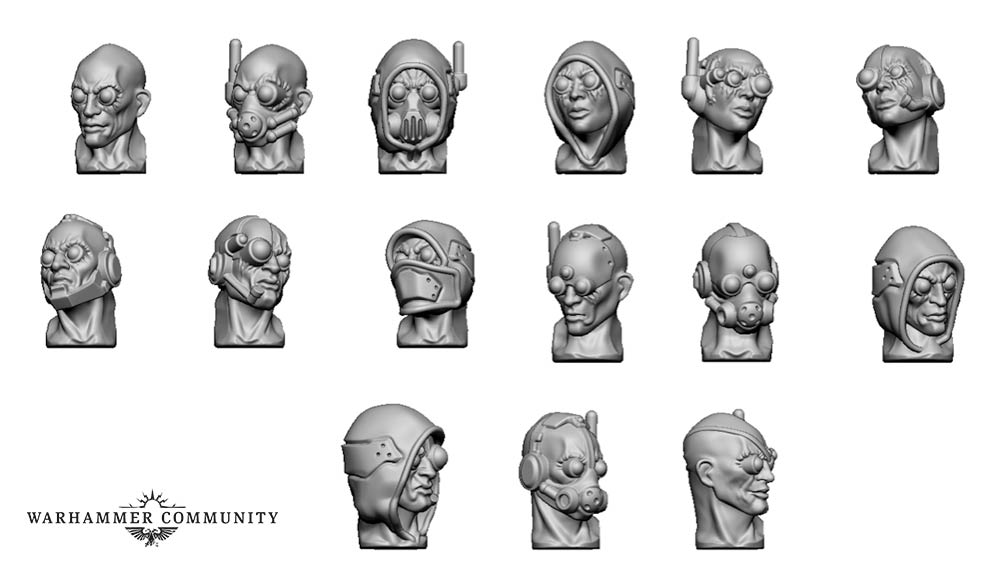 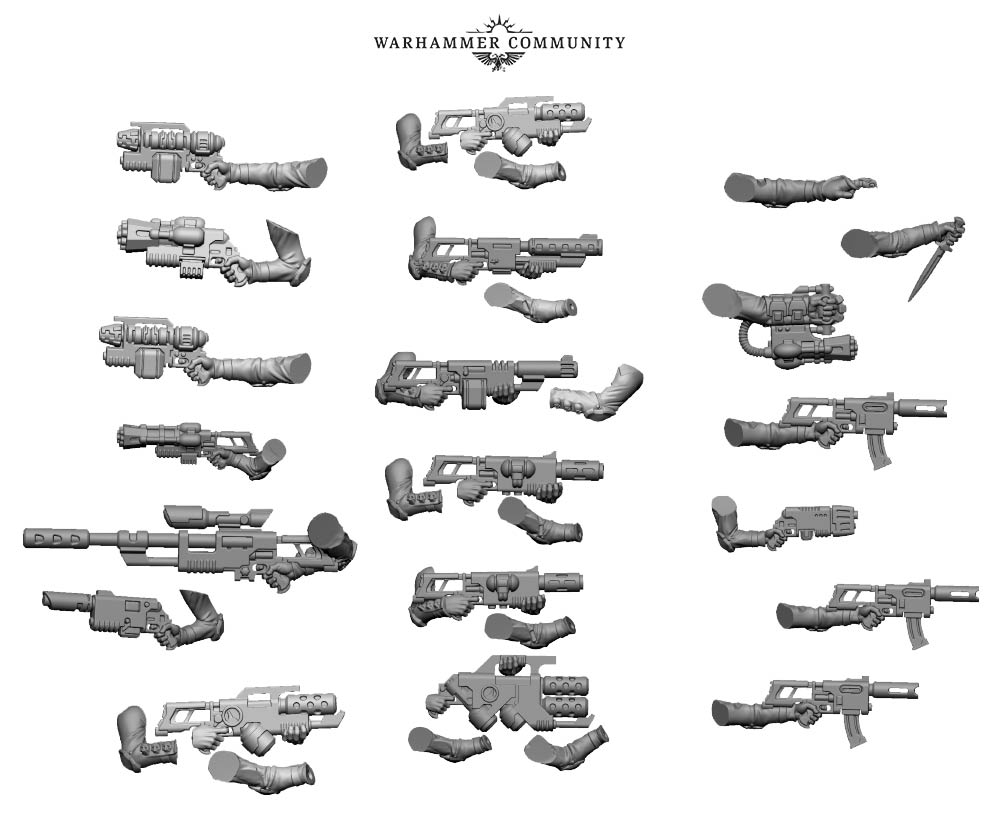 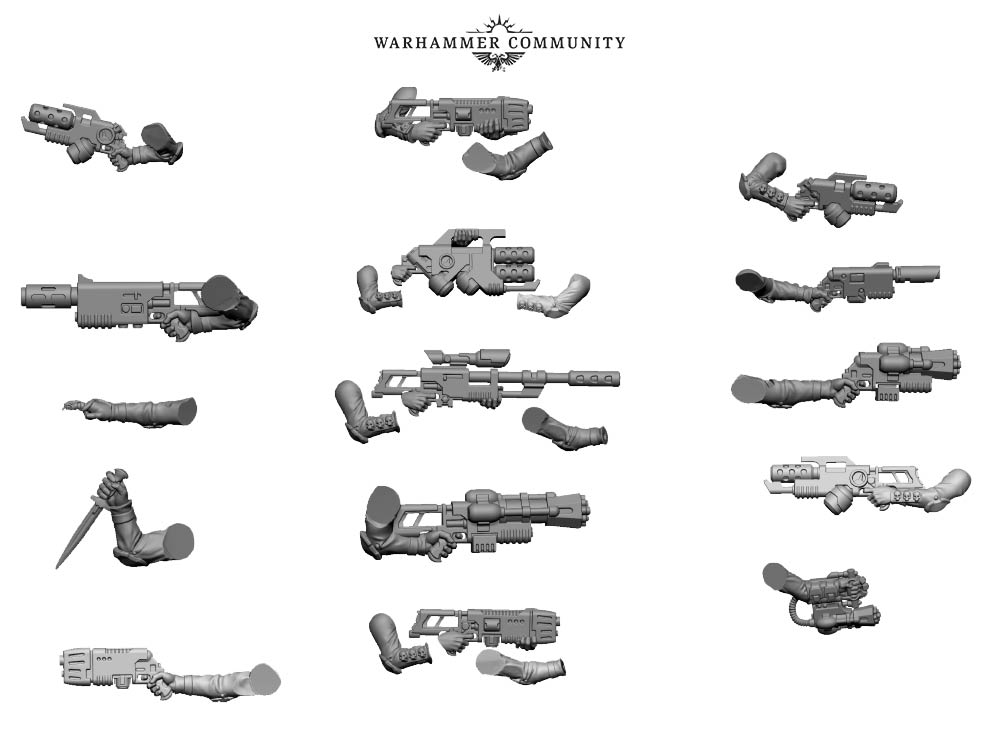 Regardless of which gang you collect, Bounty Hunters Yar Umbra and the Deserter will be a great addition to your roster – as well as characterful models to collect and paint in their own right. 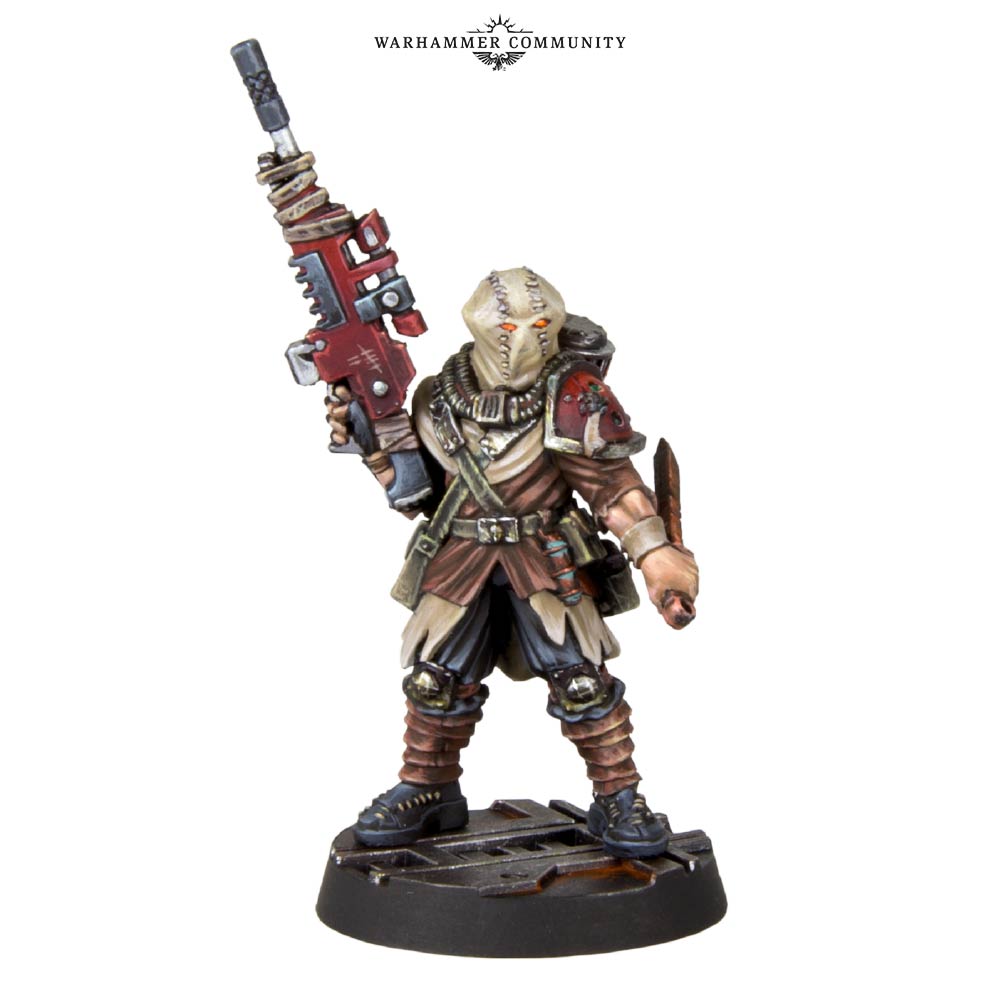 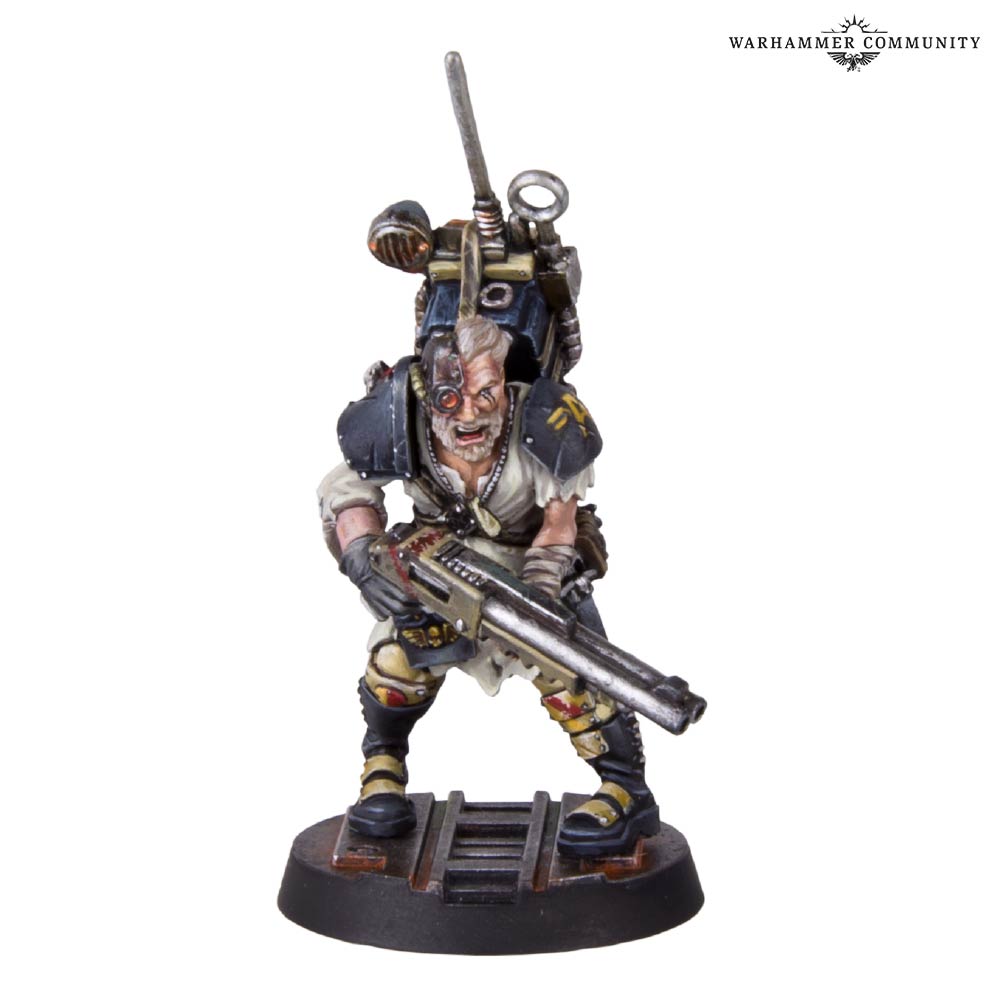 Necromunda fans can look forward to a host of models that let them bring their gangs to life in more detail than ever before. While, of course, you’re welcome to convert your own Hangers-on, the new models should make adding them to your gang simple. 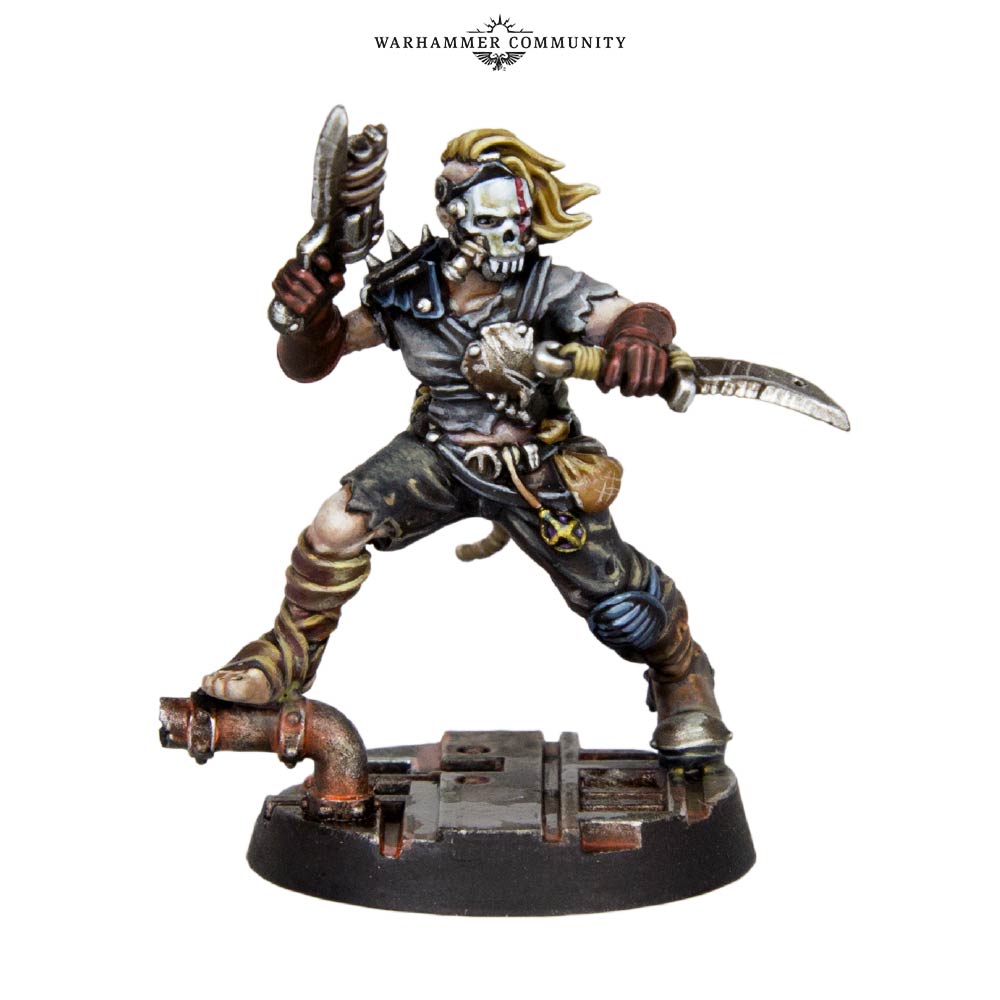 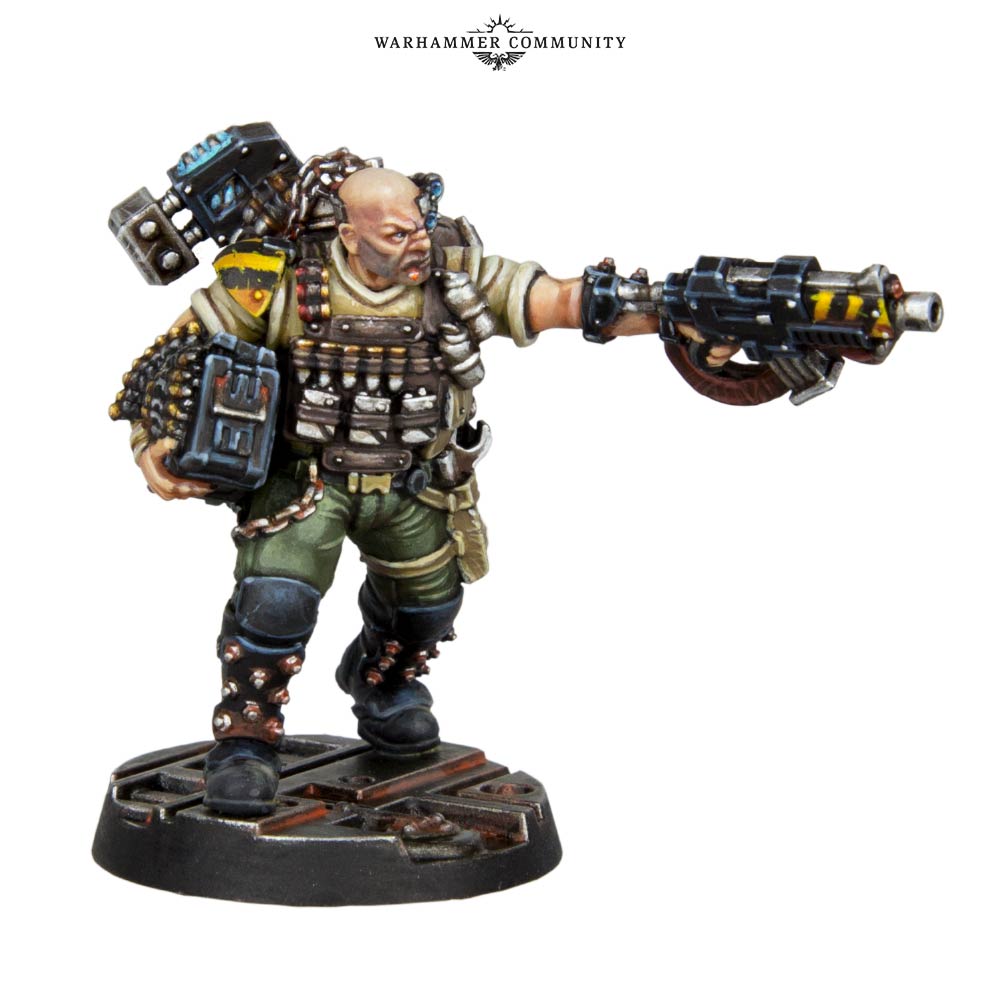 Last, and least only in terms of height, we’re incredibly excited to reveal another Squat! What a time to be a hobbyist, eh? Ragnir Gunnstein is an Ammo-jack, and a must-have if you’ve already got Grendl Grendlsen! 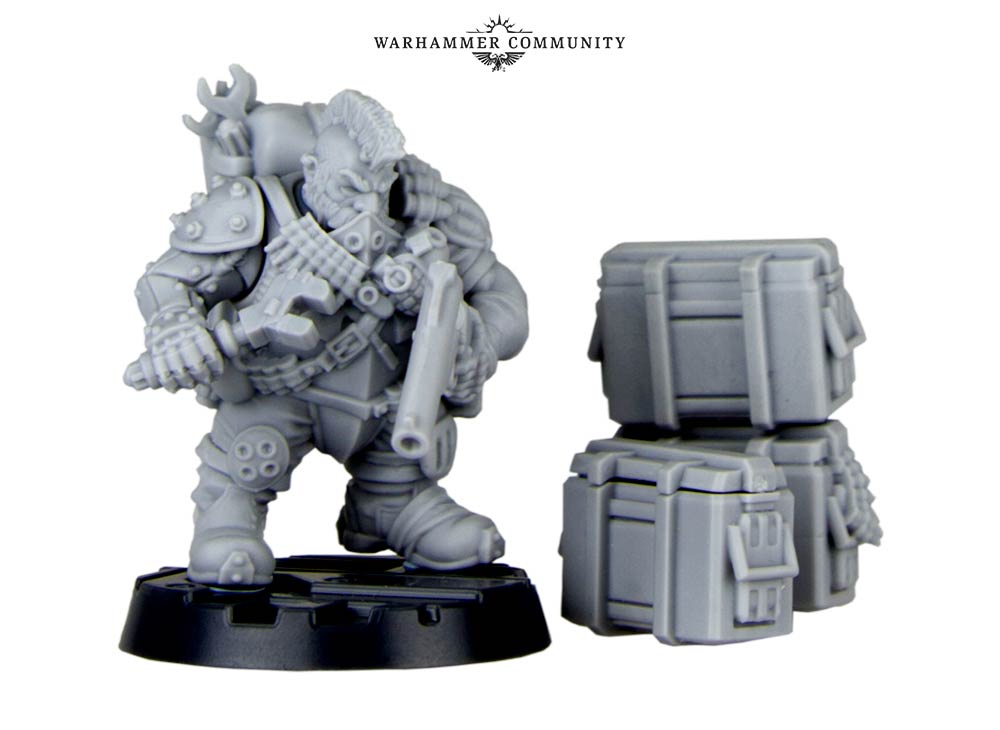 And we’re only getting started! With the six Clan Houses now on tabletops worldwide, the possibilities for the future of Necromunda are pretty much endless. There’s an incredible wealth of new stuff on the way, including new plastic kits, Bounty Hunters and even more gangs. From old favourites reimagined for a new era to models you’ve never even dreamed of, exciting times are ahead… 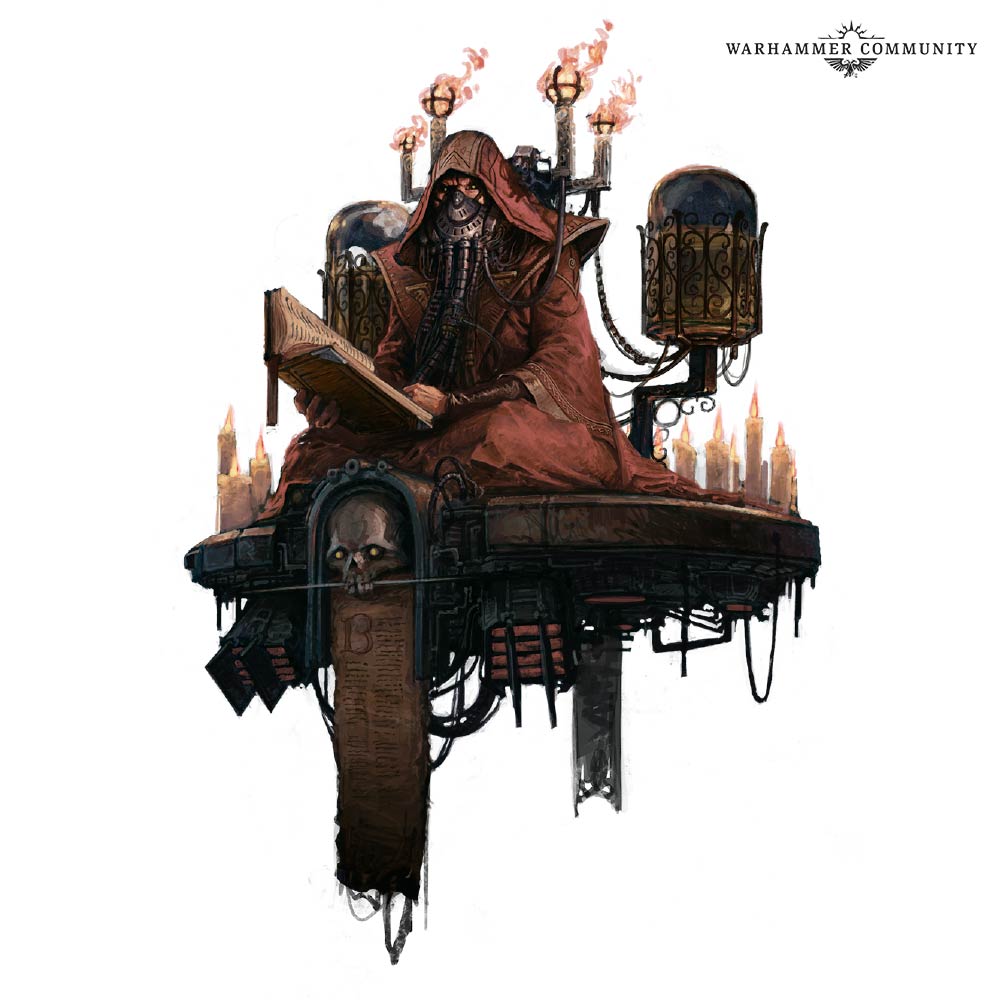 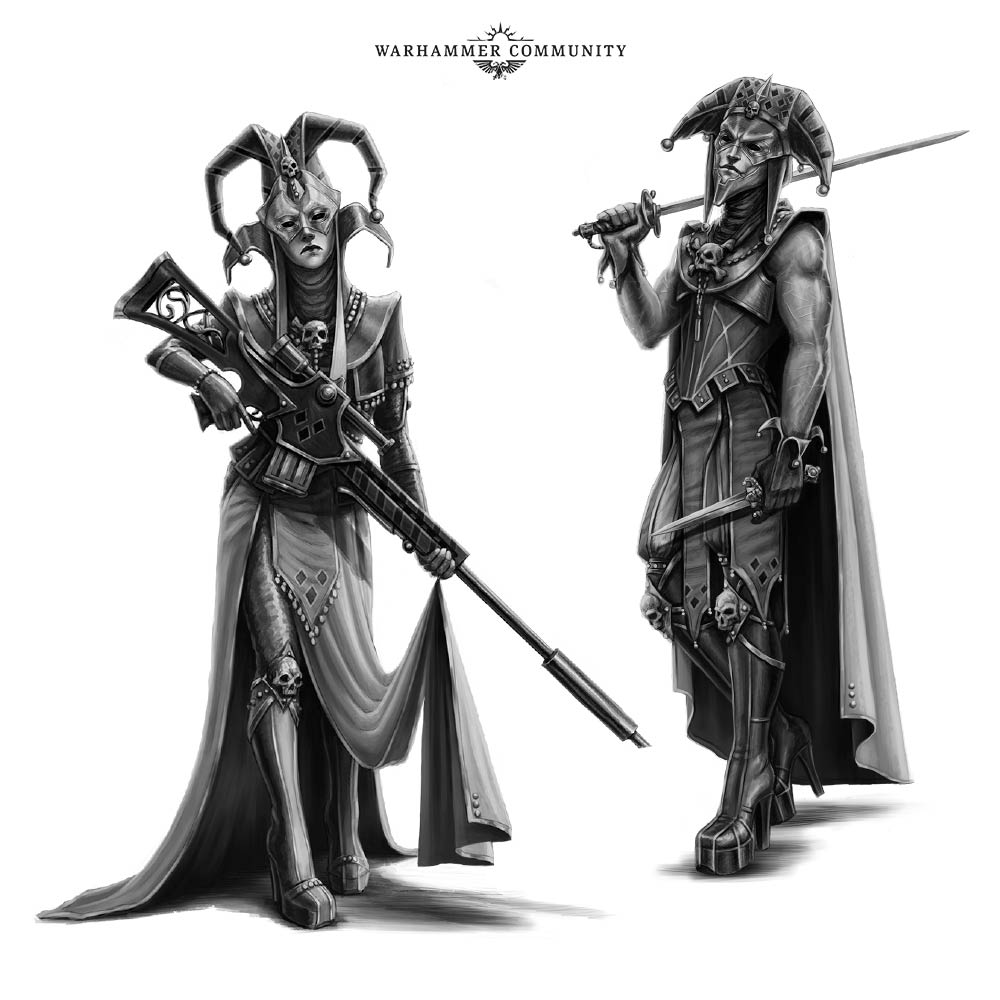 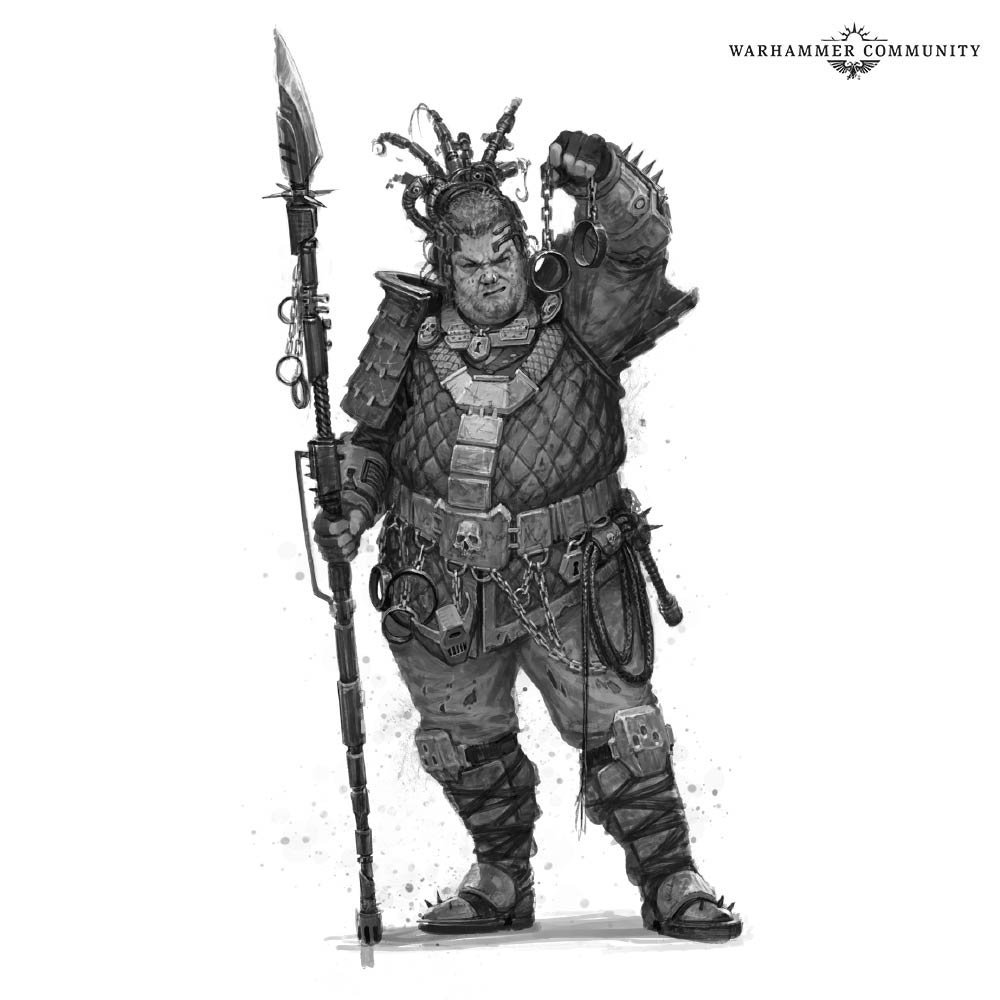 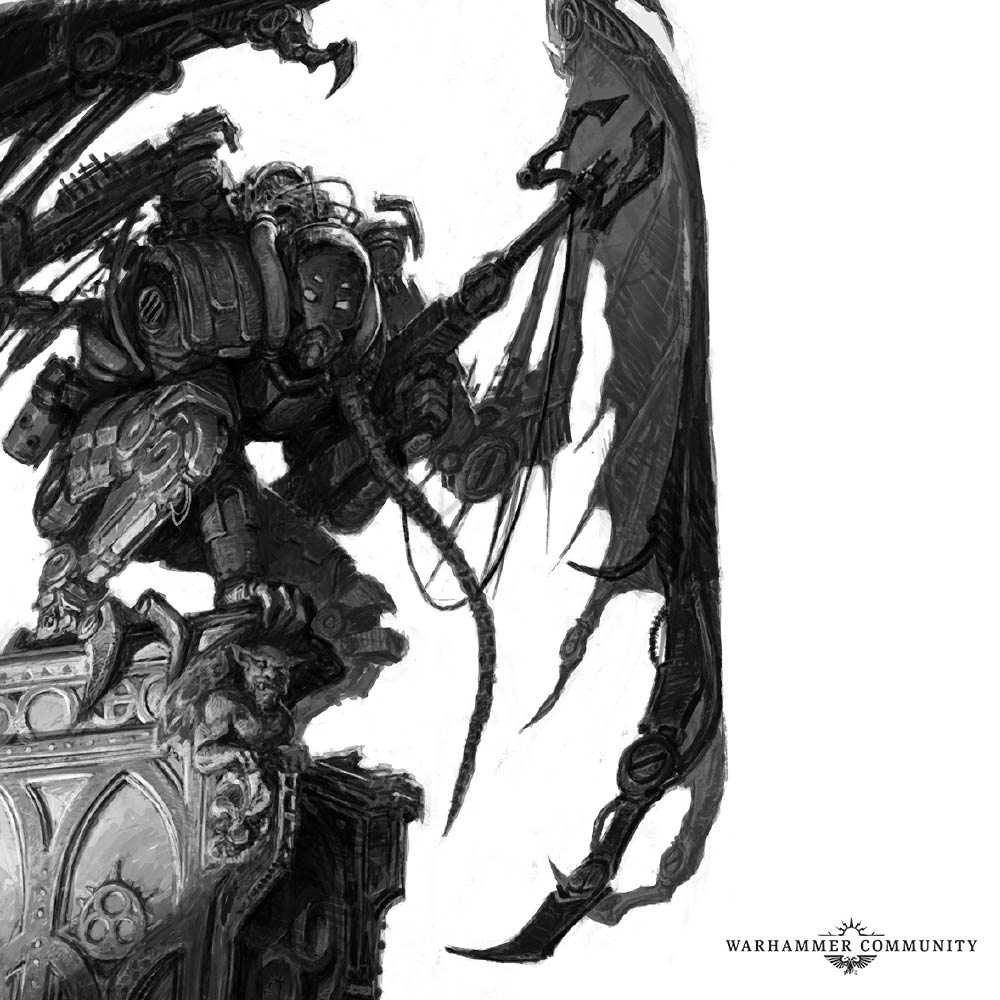 First things first. We promised you last week that you hadn’t seen all of Sanguinius, and a special edition with an appropriately glorious presentation base was on the way. Well, feast your eyes! 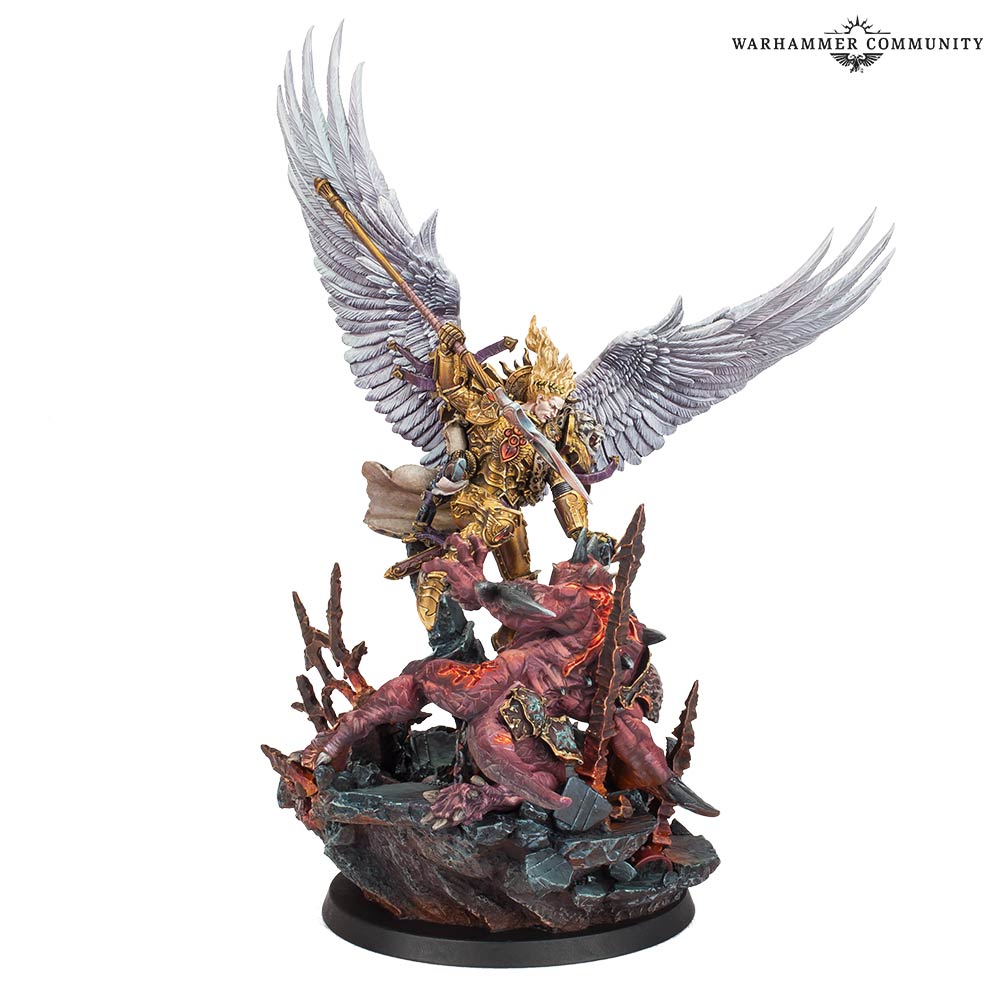 This version of the model mounts Sanguinius upon a stunning display base, triumphant over a fallen Daemon in a scene that looks like something out of a stained glass window in an Imperial cathedral.
We can also unveil Sanguinius’ second weapon option – the Spear of Telesto! This will come packed with the standard and special versions of the kit, allowing you more choice as to how you arm Sanguinius for yourself.

Rules for Sanguinius will be found in Malevolence – a thrilling new entry in the Horus Heresy campaign series that brings rules and lore for a number of fan-favourite characters and Legions.
This hotly anticipated tome takes you back into the dark world of the Horus Heresy, bringing the Blood Angels and White Scars into the fray as well as a sinister host of Traitors for them to battle.
Each of our Horus Heresy books so far has focused on specific factions in this way, bringing them to life with in-depth rules, lore and heraldry that allow you to imagine, collect and play with more diverse armies than ever before. Expect to see new champions, abilities, and unique units that truly reflect the martial character of these Legions. 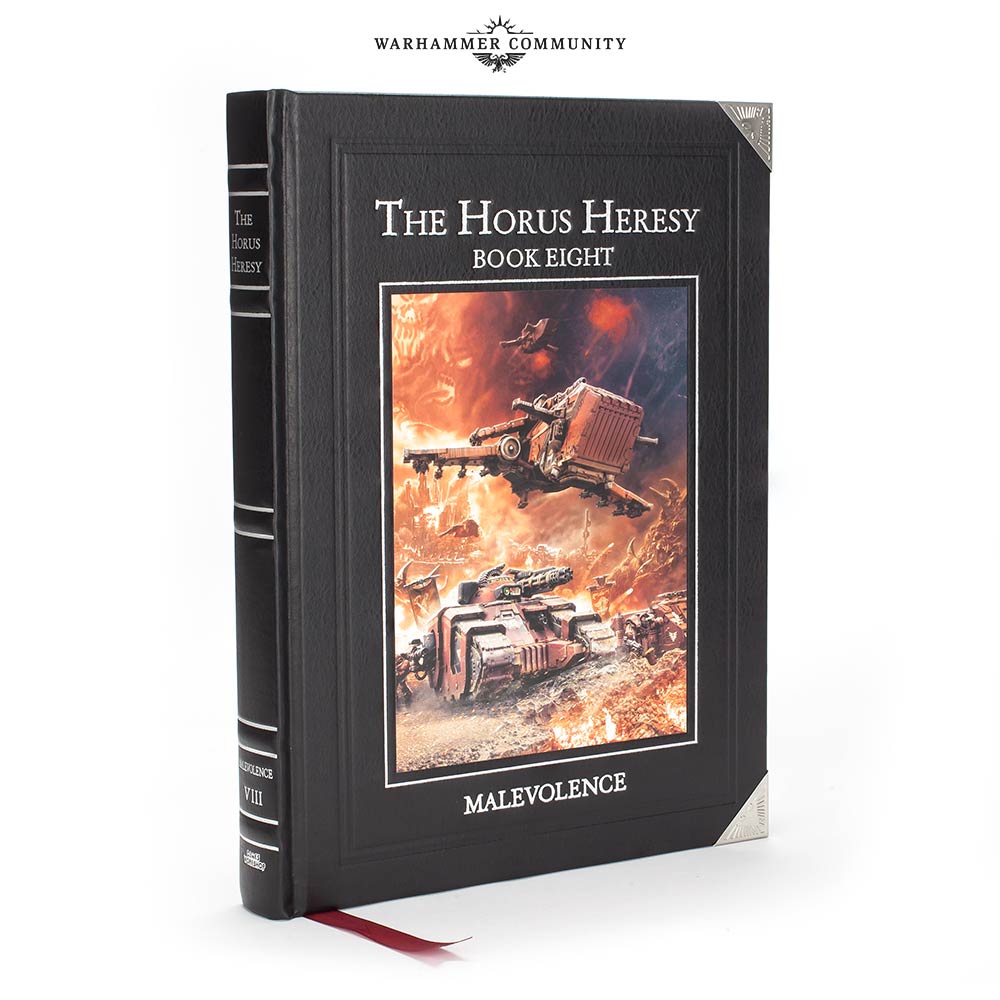 Even if you don’t collect White Scars or Blood Angels, Malevolence is packed with new material that’s of interest to any Horus Heresy fan, such as an exploration of the shadowy wars waged by the Alpha Legion on Chondax and a closer look at Daemonology during the Horus Heresy. Speaking of which… 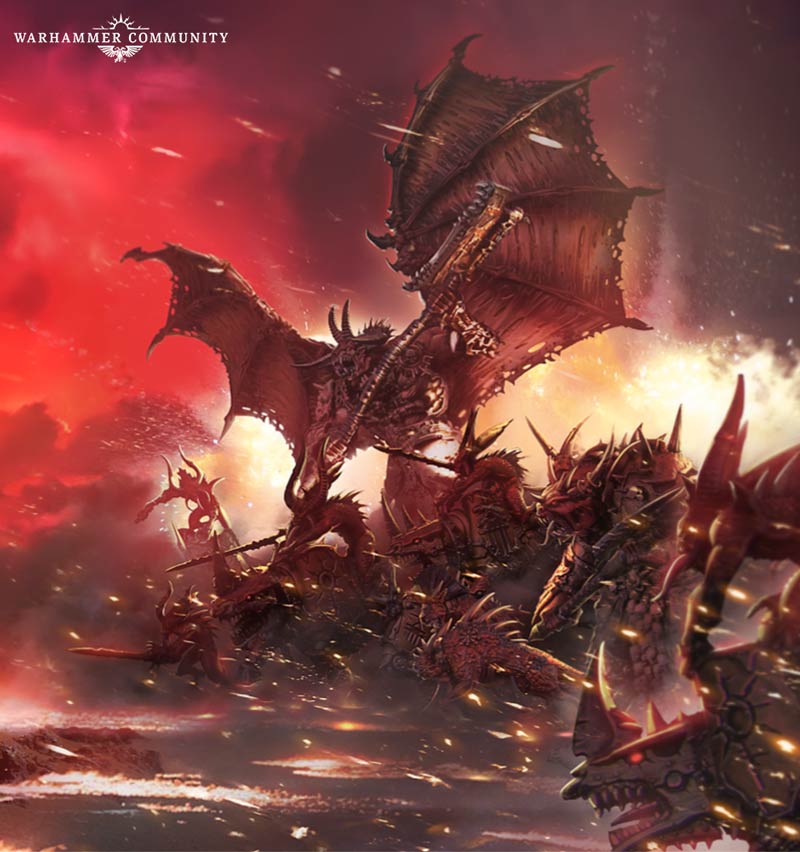 Malevolence would be huge if it was just about the Space Marine Legions – but it also sees Daemons enter the fray in full for the first time. We’re talking full-scale incursions – tides of hellspawn pouring forth from open wounds in reality. On the tabletop, this means a full army list that lets you bring daemonic forces to the Horus Heresy – so if you’ve got a Daemon collection, you can now use them in three major games systems! Not bad, eh?
For now, fans at the weekender have been able to get early access to some upcoming releases, like the recently revealed Night Lords sets, Blood Angels Crimson Paladins, and the Deathsworn – a brutal Space Wolves unit made up of those for whom the then-nascent Curse of the Wulfen was more of a blessing… 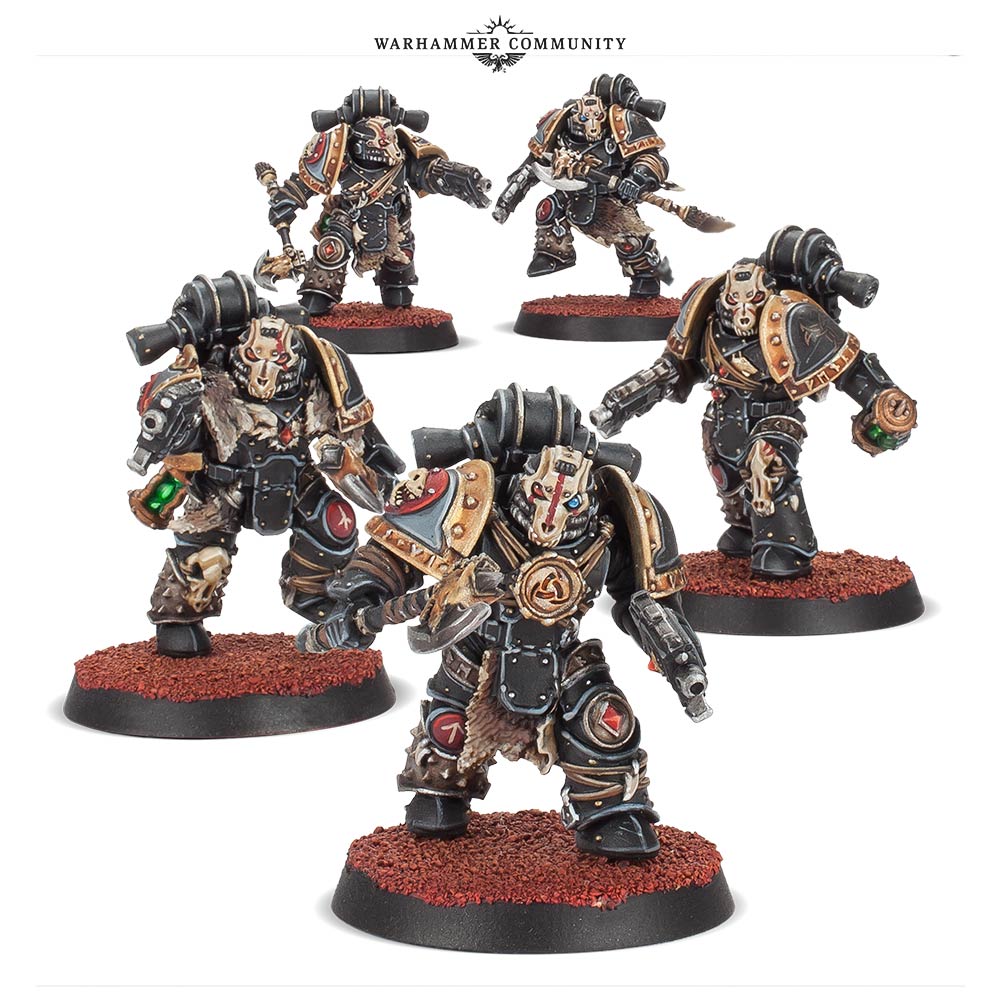 Keep an eye out for these guys, as they’ll be available to order online pretty soon!
2/02/2019
Natfka
Forgeworld, Horus Heresy, Necromunda, White Scars