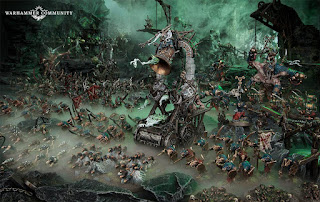 The Skaven are coming this weekend to pre-orders and today's preview is up. Lets take a look at what is coming for the Skaven.

via the Warhammer Community
https://www.warhammer-community.com/2019/02/05/5th-feb-chaos-battletome-skaven-the-low-downgw-homepage-post-3/

Your prayers to the Great Horned Rat have been answered, and the skaven are finally getting a battletome of their own! This weekend sees the clans reunited in an incredible battletome that transforms them into a fun, thematic fighting force known as the Skaventide. In today’s preview, we’re taking a look at how the army works. 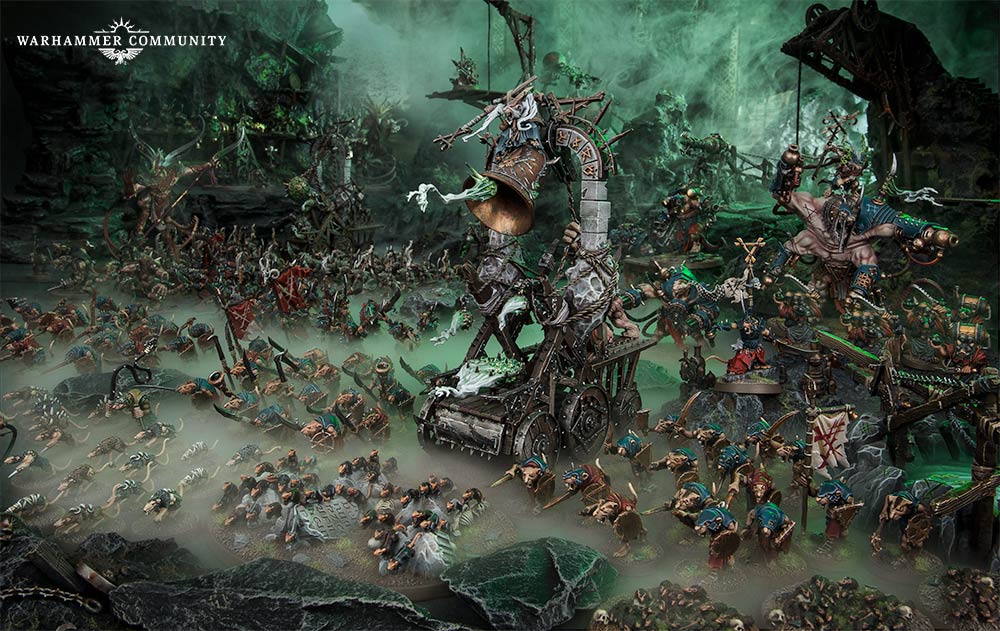 First, though, if you’re new to the Mortal Realms, some context:

Who are the Skaven?

Skaven are one of the strangest and most sinister denizens in the Mortal Realms. A vile race of chaos-tainted rat-mutants, skaven are ingenious, cowardly, megalomaniacal and avaricious. Skaven society is divided broadly into different clans, each with their own distinct culture and ways of war. 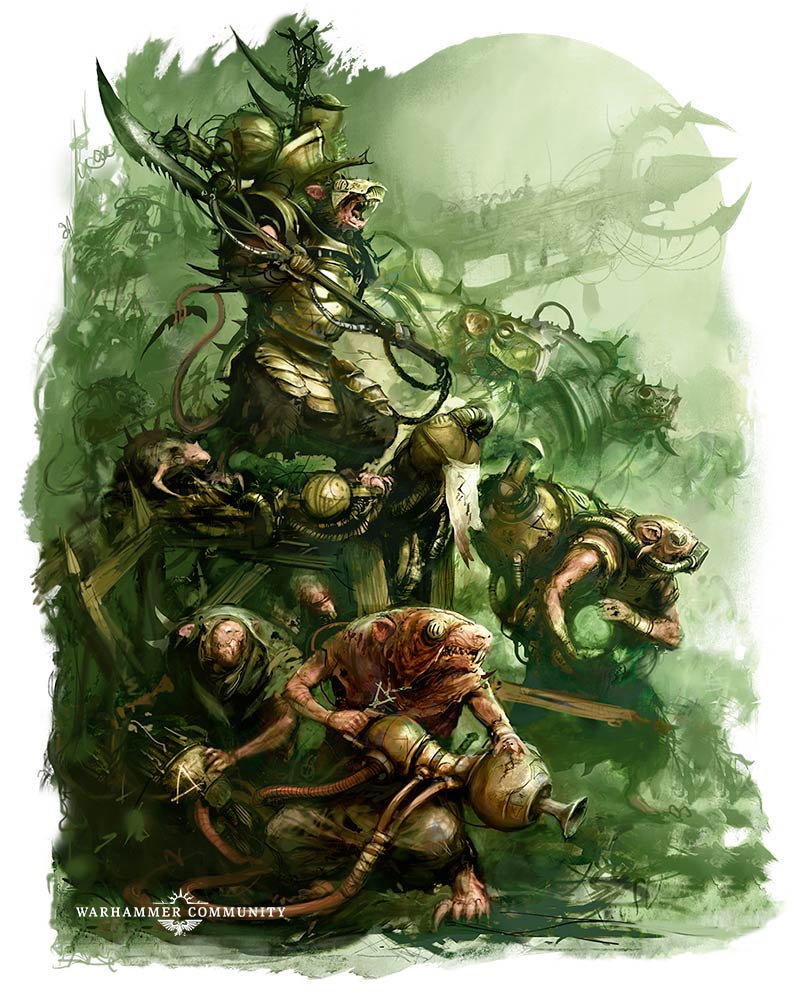 The Clans Eshin, for instance, are peerless assassins and thieves, while the Clans Moulder are bio-engineers who breed horrific living weapons. Conflict between the clans, and indeed within them, is rife, and skaven are as likely to fight each other as they the forces of Order, Destruction and Death.
Skaven are supreme meddlers – it was the interference of assassins from the Clans Eshin that caused Nagash’s grand ritual at the end of the Time of Tribulations to go horribly awry, while stray skaven tunnelers were indirectly responsible for revealing the Idoneth Deepkin to the world.

So What’s in the Battletome?

Battletome: Skaven follows the long, strange story of the skaven in the Mortal Realms, exploring the nature of the Great Horned Rat, Gnawholes and skaven society. You’ll also find loads of evocative new art that brings the world of these vile ratmen to life in grotesque detail. It’s perfect for inspiring your own collection and helps to tie your army into the grand narrative of Warhammer Age of Sigmar. 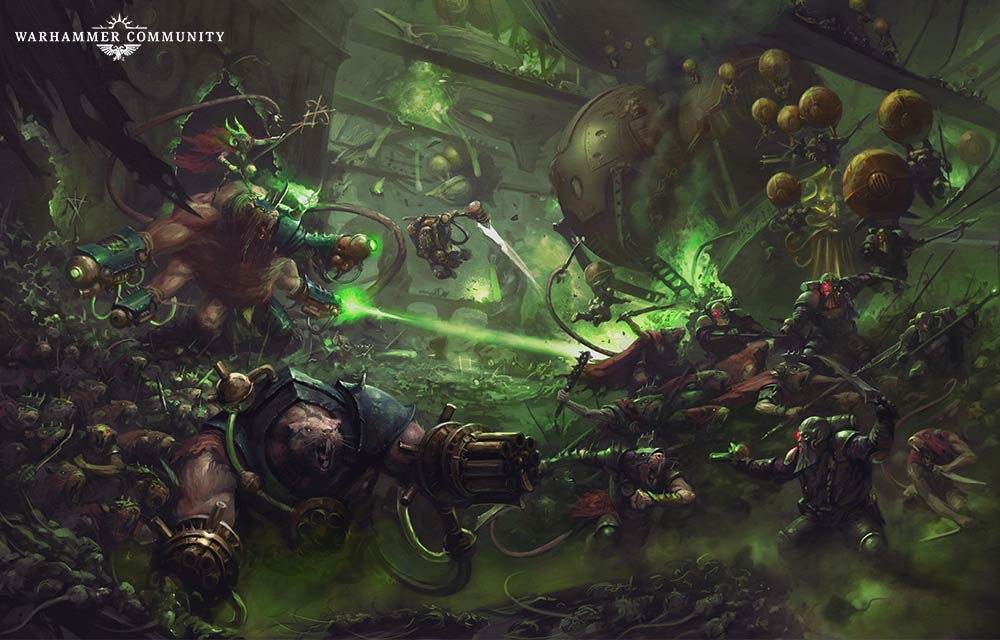 Buckle in – there are loads of these. Skaven armies have four allegiance abilities that apply across their whole army, and six allegiance abilities specific to the clans.
Firstly, you’ve got Overwhelming Mass and Strength in Numbers, which can transform even a humble unit of Clanrats into a fairly terrifying fighting force. 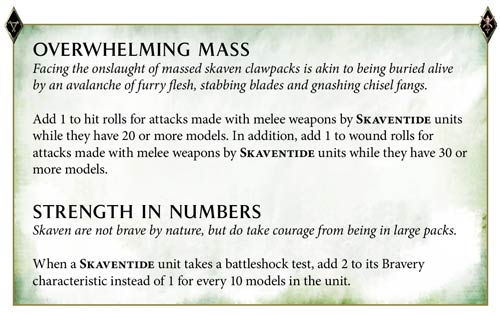 Then we’ve got Lead from the Back and Scurry Away, which make Skaventide Heroes nigh on impossible to pin down. 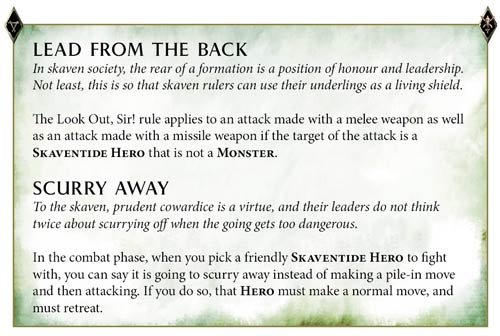 Clan abilities are a bit fancier. The Clans Skyre and Pestilens abilities will be familiar from their appearance in last year’s General’s Handbook, and are joined by new allegiance abilities for each of the main clans. Take the Clans Verminus – you’ll be able to give a command trait to six Clawlords, giving you loads of versatility.

Or the Clans Moulder – with Prized Creations, you’ll be able to make your favourite Hell Pit Abomination even deadlier. 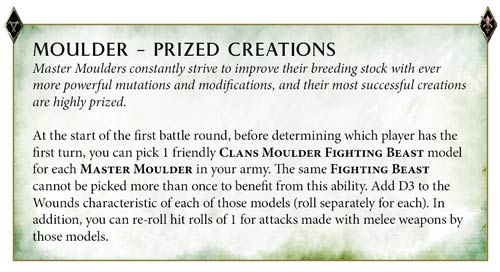 All of these abilities work in tandem. For example, you could field a Grey Seer, Deathmaster and a couple of Clawlords in the same army, and each would benefit from their own allegiance abilities. 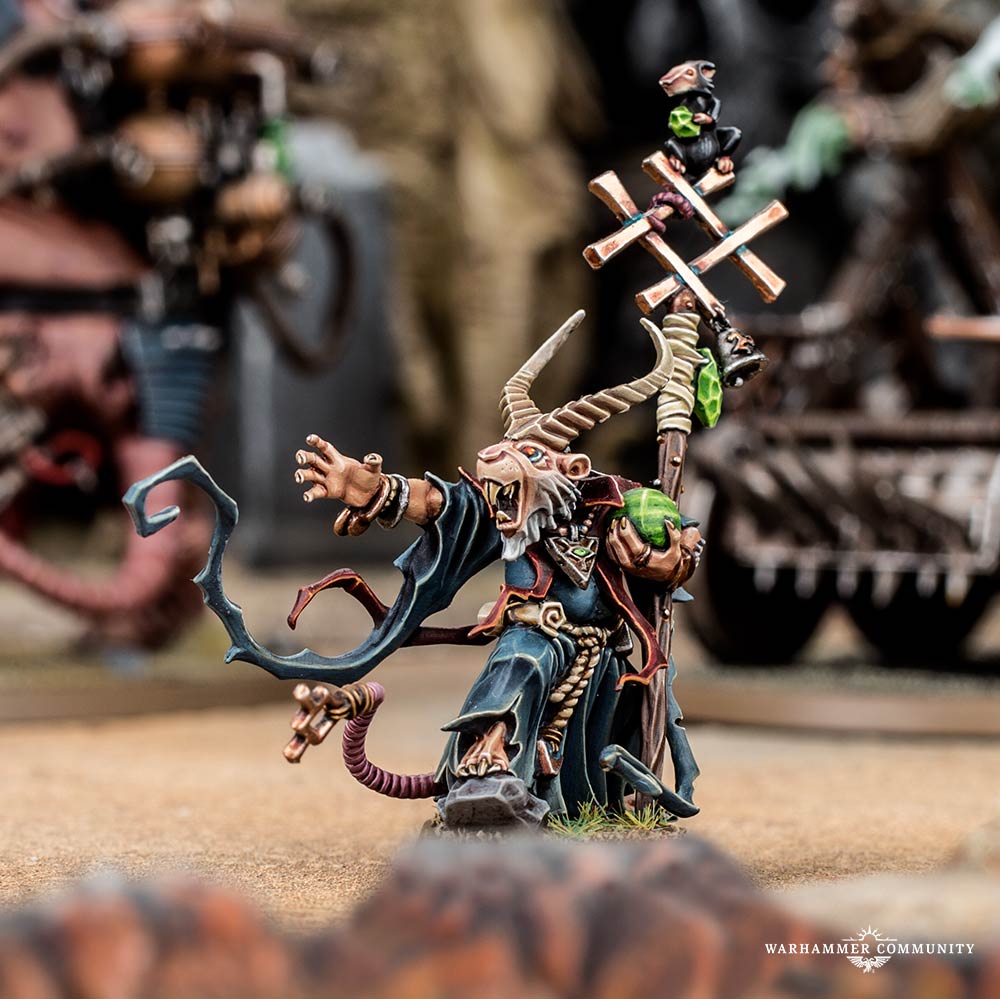 Skaven are getting not one but two magical lores to draw from! The first –the Lore of Ruin – is available to Grey Seers and contains all sorts of hideously effective curses. Splinter, for example, lets you pick out key enemy models and slay them.

The Clans Skryre, on the other hand, get the Lore of Warpvolt Galvanism, allowing them to supercharge nearby units or shield themselves from harm. 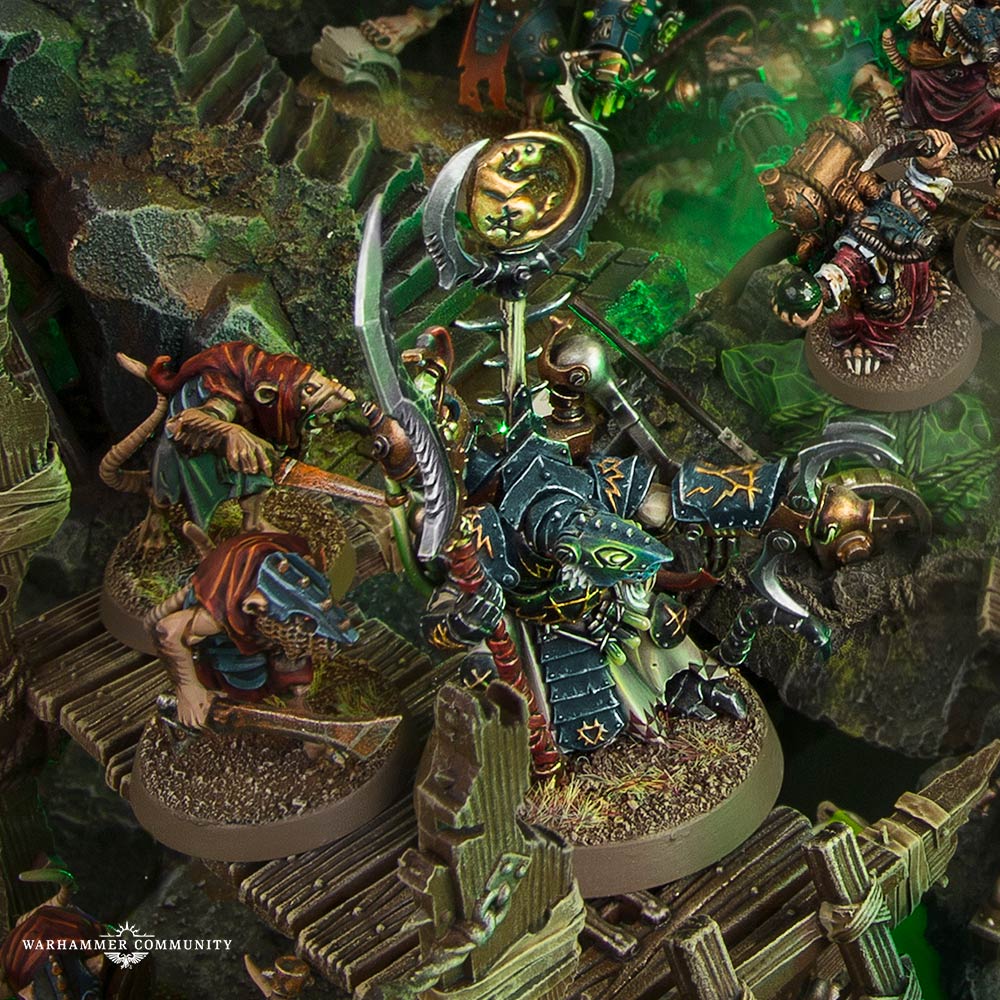 More-more-more Warp Power, for example, gives your chosen unit re-rolls to hit and wound until the next hero phase, causing your damage output to increase enormously!

And that’s not even the half of it –  we haven’t even gotten into the improved warscrolls, warscroll battalions or the 36 artefacts available to the army.

That’s pretty much up to you! Skaven have traditionally been seen as a horde army, and if you want to use them that way, you’ll find they’re pretty excellent. 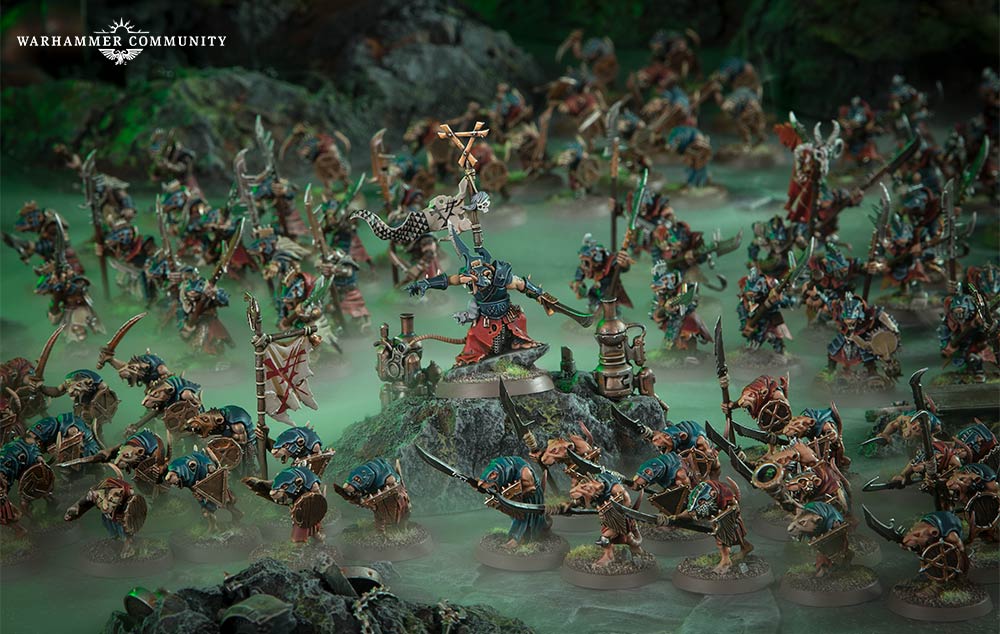 Dig deeper, however, and you’ll find all sorts of unusual army builds. Support an artillery line of Plagueclaws with bulky Rat Ogors, field a super-elite force of Stormvermin, or field a convocation of terrifying Verminlords – the possibilities are nigh endless. Of course, if you’d rather focus on one of the great clans, you can still do that – in fact, you’ll be rewarded for focusing your efforts with special Battleline choices. 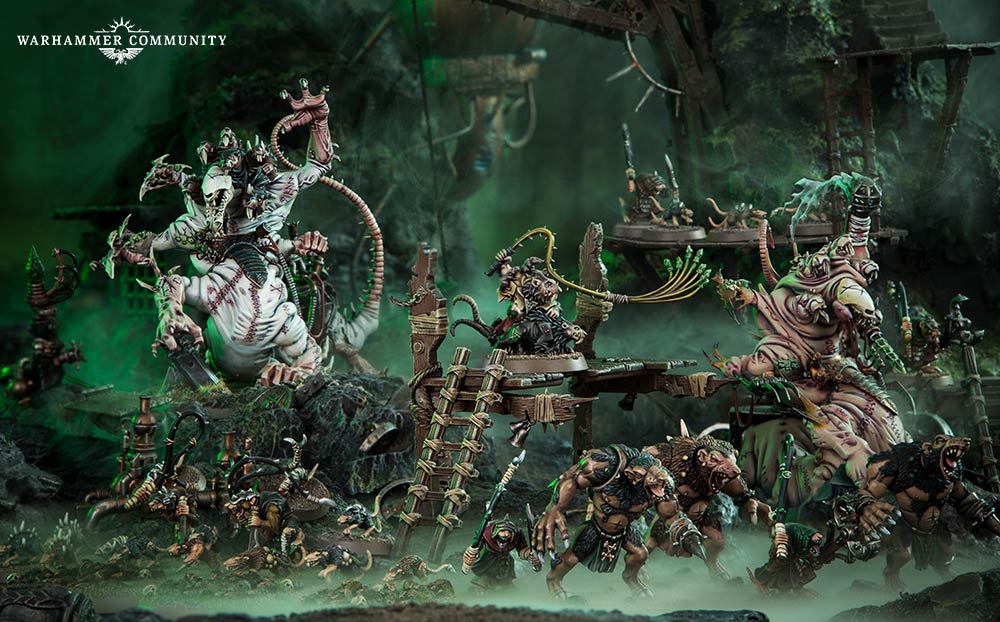 Battletome: Skaven will be available to pre-order this weekend alongside Carrion Empire, Battletome: Flesh-eater Courts and more. If you’re dusting off your skaven collection for the new battletome, we’d love to see it on the Warhammer Age of Sigmar Facebook page. If you’re yet to get started, Start Collecting! Skaven Pestilens is a brilliant place to kick off your army.
2/05/2019
Natfka
Age of Sigmar, Games Workshop, Previews, Skaven