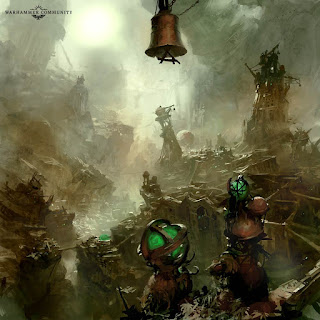 Ever wonder how the Skaven get just about anywhere? Gnawholes bored through the very fabric of the void is how. Can't wait for them to bore their way into the 40k universe.

The Basics
Gnawholes are unnatural tunnels, bored through the very fabric of the void – the vast, mysterious space in which the Mortal Realms hang. Gnawholes are unique in that they allow transit between realms without the use of a Realmgate, but they are lethal for any but the skaven to use, producing vile, chaotic energies that can kill any nearby. The gnawhole network offers the skaven a unique tactical edge, allowing them to bypass any defence and meaning they have no need to battle over the Realmgates coveted by other races.

How Gnawholes Are Made
Each Great Clan has their own secret and arcane means of creating gnawholes. The Clans Skryre, for instance, use enormous reality-piercing drills, while the Clans Pestilens employ plagues that chew through reality itself. The final destination of any given gnawhole is somewhat unpredictable, and many skaven have perished by accidentally burrowing into a volcano or ocean in their eagerness to set up the perfect ambush…

Gnawholes: A History
The Origins
In the Age of Myth, the secrets of creating gnawholes were shared with the skaven by the Verminlords – daemonic servants of the Great Horned Rat.

The Disappearance of the Clans Shrykt
In the Age of Chaos, the entirety of one of the Great Clans dug an enormous gnawhole in Aqshy, before vanishing into its depths. Neither the Clans Shrykt or the gnawhole were ever seen again.

The Gnawhole in Azyr
As Sigmar rallied his forces before the beginning of the Age of Sigmar, the powers of Chaos remained unaware of his plans to reconquer the Mortal Realms with the Stormcast Eternals. However, the operatives of Clans Eshin managed to witness the final preparations from the shadows of the God-King’s throne room. Disappearing through a hidden gnawhole, they shared this knowledge with a mysterious master…

The Draining of the Khaphtar Sea
As Nagash’s Great Black Pyramid neared completion, the Lords of Decay – the ruling overlords of the skaven clans – decreed that he must be stopped. A force of millions was mustered before being ignominiously destroyed when the gnawhole they were digging emerged at the bottom of the Khapthar sea – drowning the army and flooding Blight City with a literal tidal wave of Deadwalkers. The draining of the sea also resulted in the Idoneth Deepkin there being revealed to Nagash, forcing them into diplomatic negotiations with the forces of Order and shaping the fate of their race forever.

And Beyond…
The network of gnawholes only continues to grow, offering skaven access to more and more of the Mortal Realms and fundamentally weakening the fabric of reality…

As long as they maintain the network, the skaven will remain a menace to the Mortal Realms – wherever their enemies hide and however they choose to defend themselves!