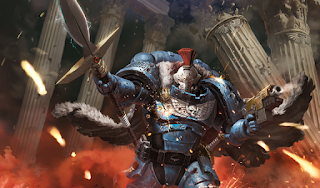 This looks like a fun chapter to work on. It might be blue... but its a different shade of blue.


via the Warhammer Community
https://www.warhammer-community.com/2019/06/12/who-are-the-emperors-spearsgw-homepage-post-4/

With Aaron Dembski-Bowden’s latest novel, Spear of the Emperor, up for pre-order, we thought we’d find out a bit more about the starring Chapter of Space Marines – the Emperor’s Spears. Here’s what we know so far… 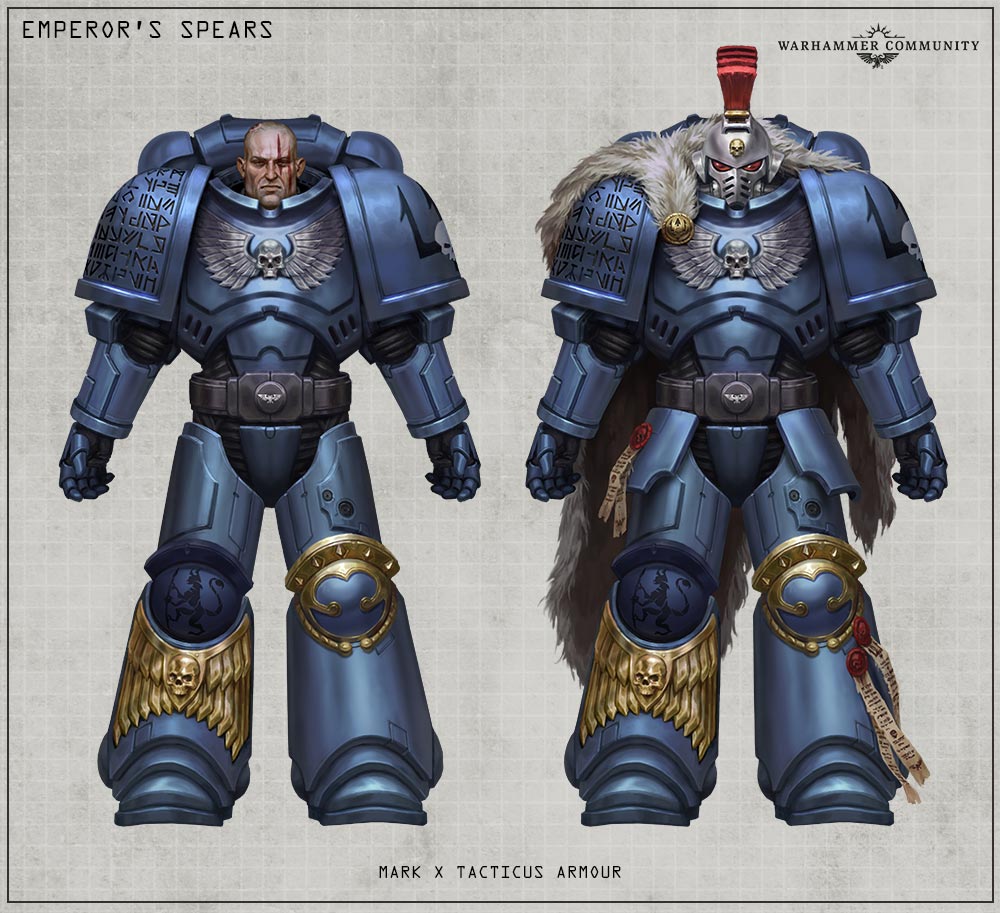 Records of the Emperor’s Spears origins are scarce, but they are believed to have come from the 25th Founding, also known as the Bastion Founding, in the latter half of M40. The first recorded encounter with the Chapter was in 594.M40, suggesting they have been defending the Imperium for perhaps a millennium and a half, making them relatively young by the standards of Space Marine Chapters. 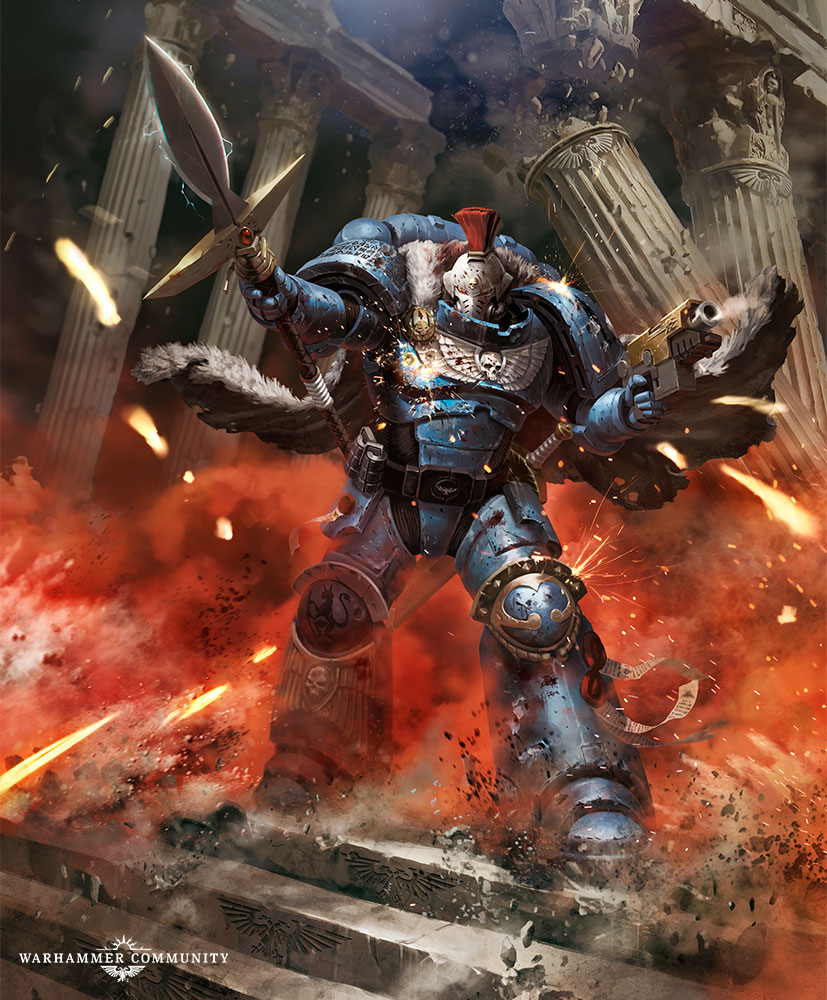 The Emperor’s Spears are one of the three Chapters known as the Adeptus Vaelarii, the Sentinels of the Veil. Alongside the ill-fated Star Scorpions and the Celestial Lions, they defend the Elara’s Veil region of Ultima Segmentum, ever watchful for insurrection and rebellion, as well as external threats.

Nemeton, home world of the Emperor’s Spears, is a storm-wracked ocean planet dotted with chains of archipelagos that are home to warring clans of superstitious humans. The relationship between the Chapter and Nemeton’s people is very different from that of most Space Marine Chapters and their recruiting stock. The tribes see the Space Marines as the spirits of lost children, taking their young before their time and leaving them simply ghosts to be mourned. 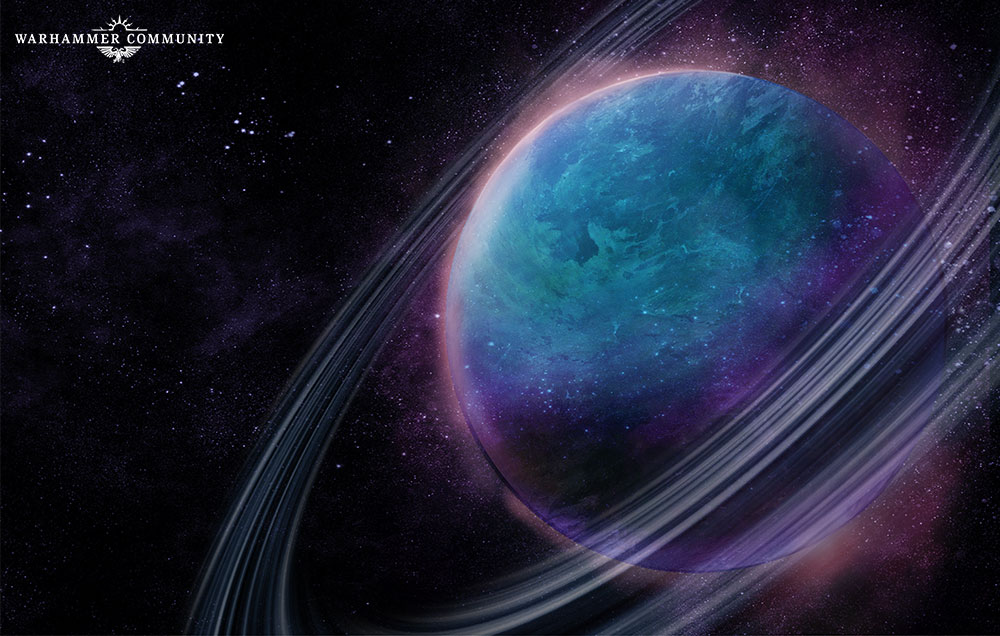 Nemeton itself is a curiously well-defended world. A mighty minefield protects approaches to the planet, while many of the rocks that make up Nemeton’s rings have been turned into weapons platforms capable of bombarding attackers with waves of deadly torpedoes. Further defences come from the Tech-Priests of Bellona, a forge moon in the Nemeton system. The Emperor’s Spears have formed close links with Bellona’s leaders, and together they are the foremost defenders of Elara’s Veil.

The Emperor’s Spears are, for the most part, a Codex-compliant Chapter, with some notable exceptions. Rather than fighting as companies, the Chapter tends to operate as autonomous warhosts, often ranging far from Nemeton in defence of Elara’s Veil. 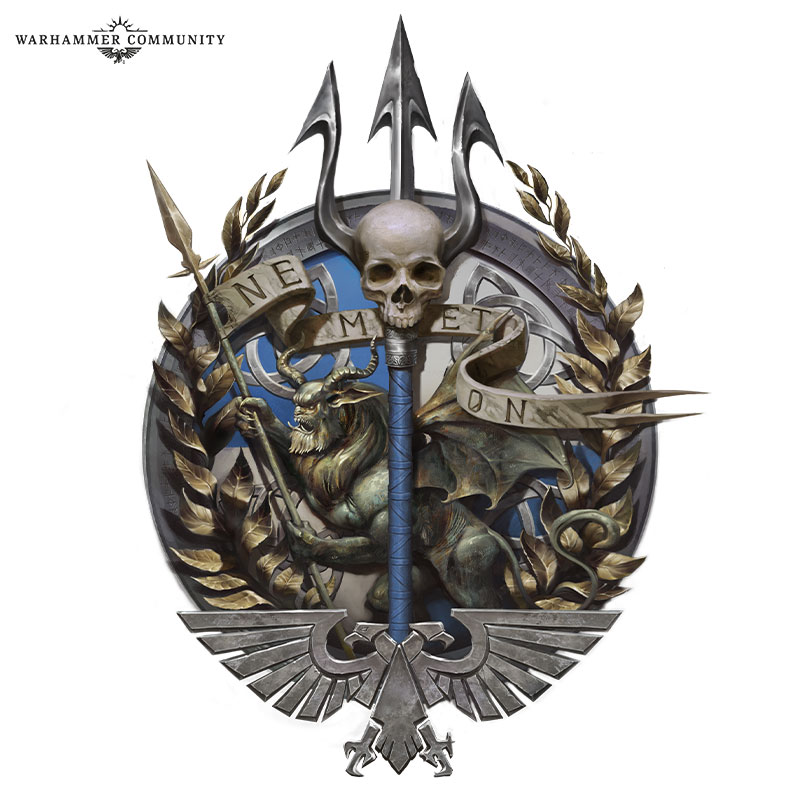 Each warhost marks their azure armour with a range of Nemetese Ogham runes that are believed to comprise a mix of unit markings, honour sigils and other more esoteric icons. Some veterans who fought alongside the lost Star Scorpions or the dying Celestial Lions bear icons of those Chapters in honour of fallen comrades-in-arms.
Most warriors bear personal heraldry on one knee pad, which is painted in a deeper blue. This heraldry usually reflects a specific campaign the battle-brother fought in, or the Manticora Bestia Fidelitas, a sigil representing the unity of the Adeptus Vaelarii. The Skitarii of Bellona and allied Astra Militarum regiments often also bear this sigil. Many Emperor’s Spears wear cloaks made from the hides of beasts they have hunted and slain on Nemeton. 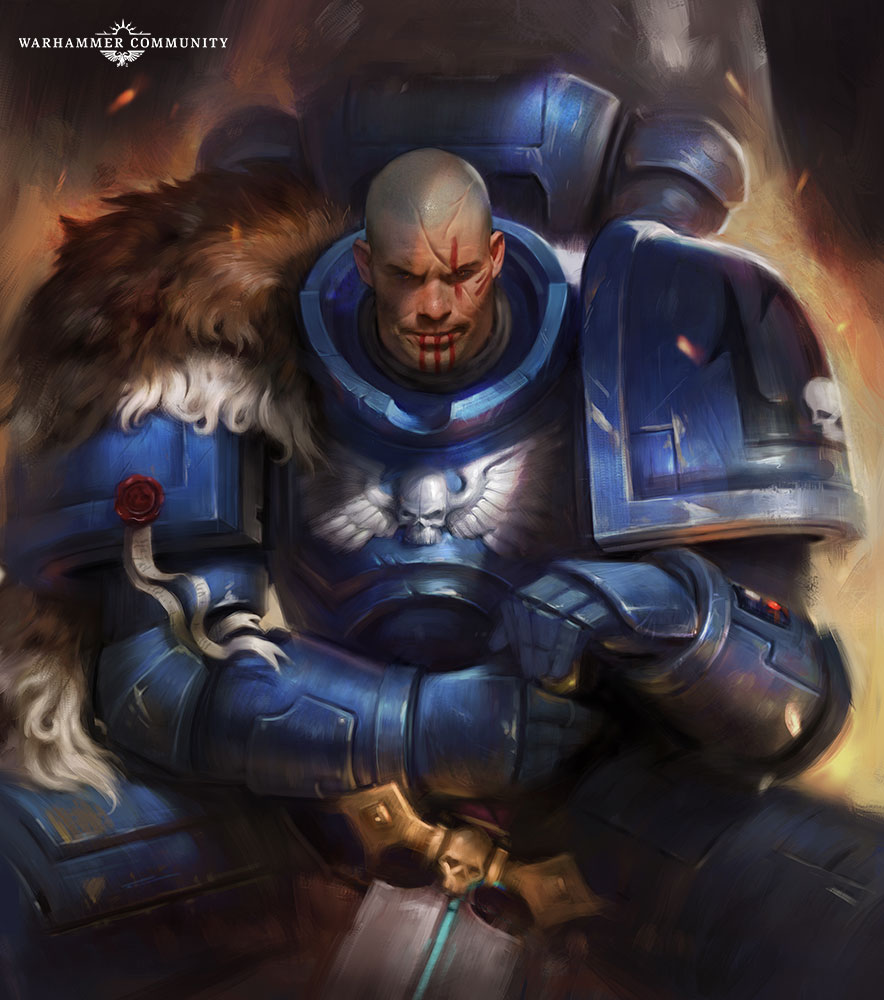 Officers of the Chapter are marked out by the helmet crests they wear. Sergeants and Veteran Sergeants bear transverse crests in red, or red and black respectively. Longitudinal crests distinguish higher ranks. The vaunted Battleguard have black and red stripes and Warhost Lords black and white, while pure white is reserved for the High King, the master of the Chapter.
The Chapter’s First Company, the Paragons, bear no crests – an inverted red trident is painted onto their helmets instead. These warrior elites forsake any chance to rise further in the Chapter, and it is believed that they must undergo blood rites and other hidden rituals to gain their position. On the battlefield, they are fierce hunters, focusing on the elimination of enemy leaders.
Chapter Specialists known as Druids replace the usual Librarians, Chaplains, Techmarines and Apothecaries of the Adeptus Astartes. These warrior-priests each stand ready to harvest the gene-seed of fallen brothers, as well as performing their own duties based on their specialist skills and esoteric abilities.

Relations with Other Chapters

Even in their relatively short history, the Emperor’s Spears have clashed with their fellow Space Marines, notably the Aurora Chapter during the Eukari Insurrection. So ruinous was the conflict between the Chapters that the Ultramarines sent representatives to quell the unrest, ruling that the Emperor’s Spears had acted rashly and were to blame for the blows that were exchanged. It is only in recent years that High King Arucatus the Swordbearer has eased the tensions that ensued between the Chapter and the XIII Legion of old. No records exist of the Emperor’s Spears and Aurora Chapter fighting alongside one another in the seven centuries since. 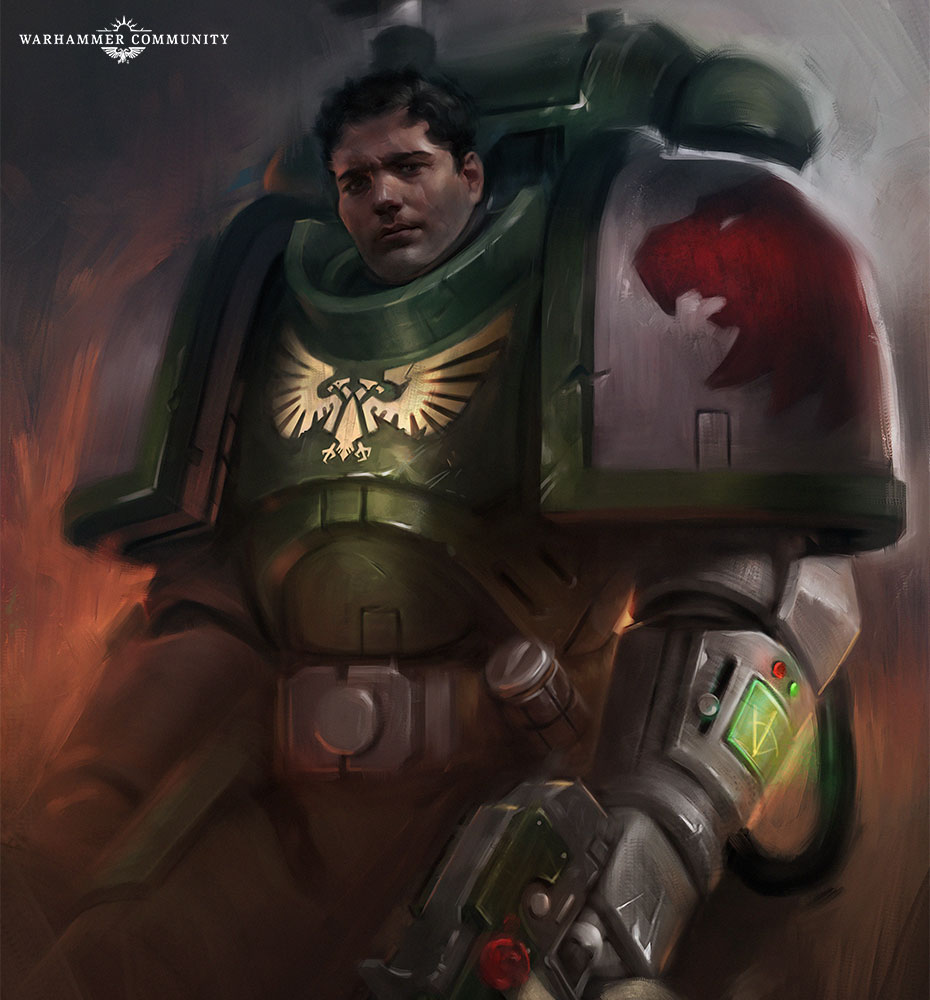 Since the opening of the Great Rift, the Emperor’s Spears have been beset by new dangers. The Rift is visible from Nemeton, and its baleful influence has been felt across the Elara’s Veil region. Hard pressed by constant war and isolation following the loss of their fellow Chapters, the Emperor’s Spears now stand upon the brink of destruction, and it remains to be seen how its future will unfold… 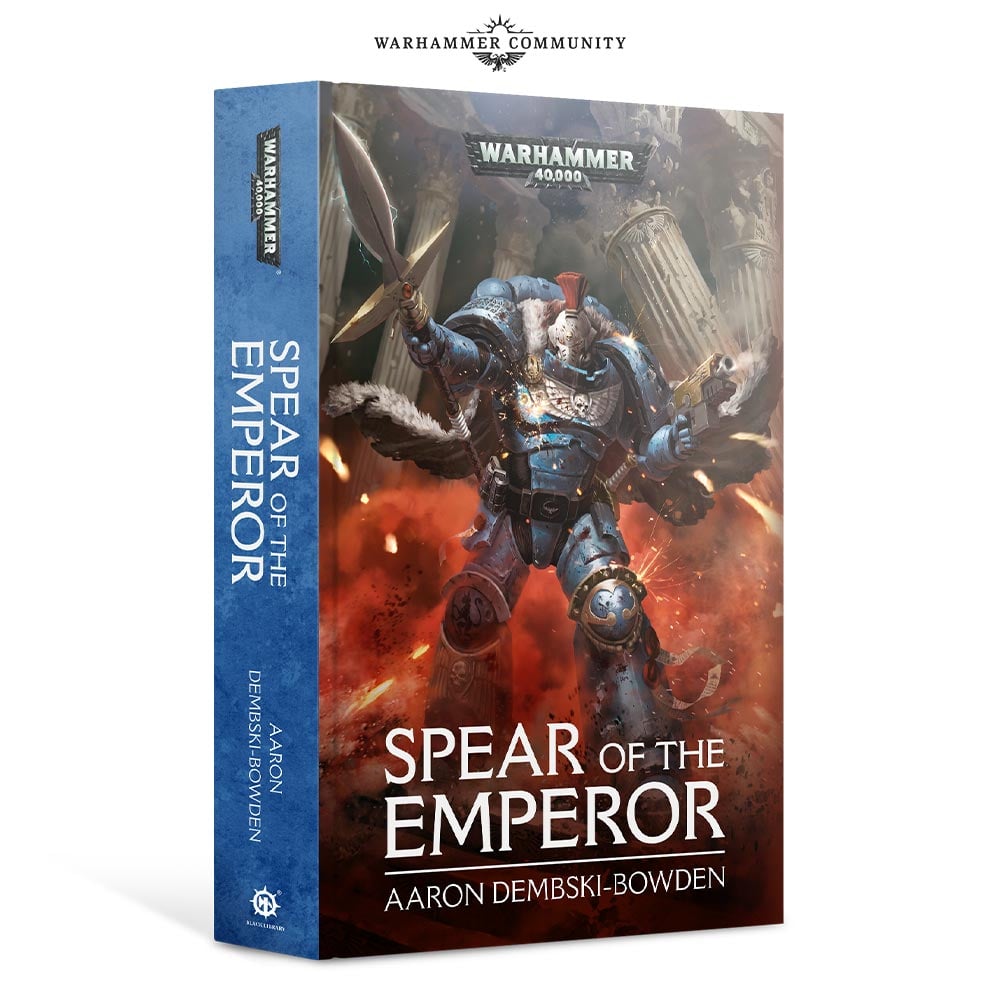 If you want to read more about the Emperor’s Spears, you can catch an interview with Aaron, as well as his exclusive short story featuring them, in June’s issue of White Dwarf – and the culmination of all his hard work in developing the Chapter, Spear of the Emperor, is available to pre-order right now! If you fancy collecting an army of the Emperor’s Spears yourself, simply pick up a copy of Codex: Space Marines and use their bespoke (and 100% official!) Chapter Tactic that featured in the glorious limited edition of Spear of the Emperor, released last year. 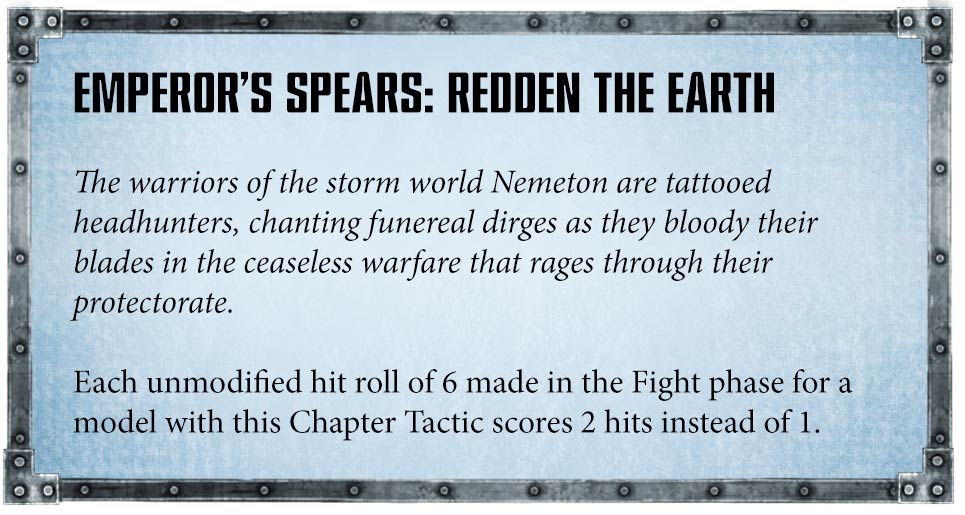