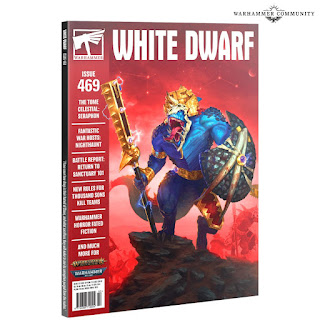 October's White Dwarf previews are up this morning giving us a look into next month's features, including Age of Sigmar, Warhammer 40k, and Kill Team.
via WarCom
https://www.warhammer-community.com/2021/09/29/side-with-the-seraphon-and-reclaim-an-adepta-sororitas-sanctuary-in-white-dwarf-469/ 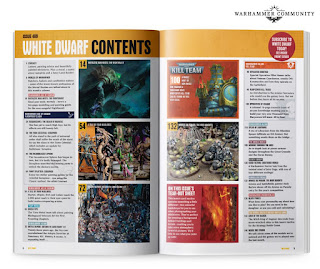 If you enjoy photographing your shiny miniatures but have always wanted immersive, atmospheric backgrounds to set them in, your wait is almost over. Issue 469 includes two full-colour backdrops for just such a purpose – one a harsh, barren mountainscape and the other a fiery, infernal hellscape. Very Warhammer. 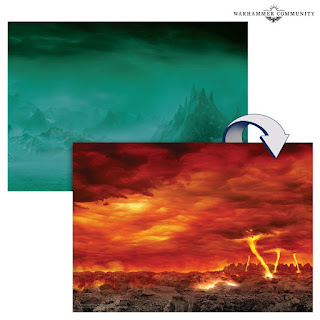 This month’s Tome Celestial comes as part of a Flashpoint Clash set in the inviolable Realm of Azyr. We won’t spoil the specifics of what’s going on there, other than to say it’s pretty ominous…
In any case, the Tome Celestial dives into the lore of the Seraphon, and brings them right up to date with the latest events as the Soul Wars give way to the Era of the Beast.
What’s more, this faction gets an official battletome update, with a replacement for the Primeval Domain allegiance ability and a new core battalion – Thunderquake – as well as new Path to Glory campaign rules and more besides. If you’re a fan of the scaly scions of the Old Ones, White Dwarf Issue 469 is unmissable. 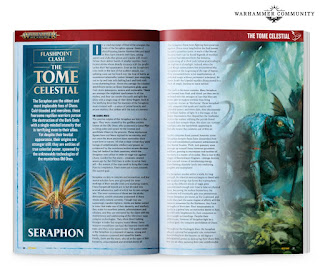 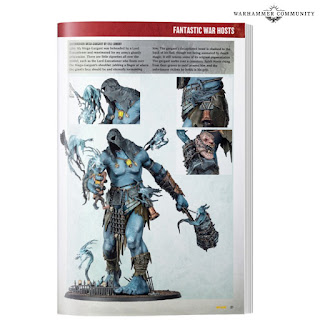 Return to Sanctuary 101
Two stunning armies duke it out for control of a fallen convent of the Adepta Sororitas in this month’s mighty clash of arms.
A glorious host of Battle Sisters from the Order of the Argent Shroud – led by Saint Celestine herself no less – is seeking to lay a righteous smackdown on the Necrons that now occupy the holy site. The Legion of Meghoshta, however, don’t plan on giving up without a fight. Cue action! 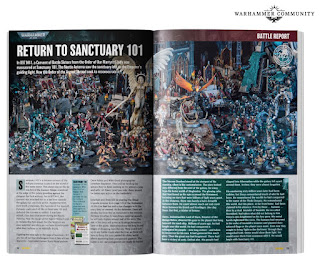 Yep, you guessed it – the Thousand Sons are bringing their own warp-wielding brand of warfare to Kill Team with a full rules set that enables them to get stuck in alongside all the other existing factions in the game.
With eight operatives to choose from, ranging from a Sorcerer to a Tzaangor Icon Bearer, they’ll be unleashing the wrath of Magnus on a skirmish battlefield near you soon. If you serve the Changer of the Ways, make sure you grab this issue to ready your Thousand Sons force for covert war. 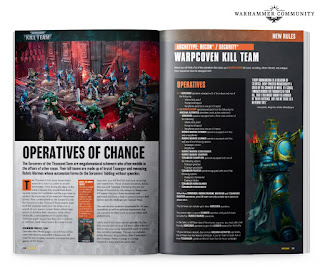 ‘Shattered World’, a spine-chilling Warhammer Horror short story by Jake Ozga, will include one of four possible conclusions. Sounds cool, huh? The tale is scary, too – it’s not called Warhammer Horror for nothing, after all.
Of course, what you do with this information is up to you – perhaps you’ll want to check your friends’ magazines to see if they have different endings, or maybe you’ll just stick with the one you were fated to read.
All that and we haven’t even mentioned that White Dwarf’s A Tale of Four Warlords series sees its featured hobbyists hitting the impressive 2,000-point milestone. And, of course, there’s even more hobby goodness for fans of The Horus Heresy, Warhammer Underworlds, and the Middle-earth Strategy Battle Game to enjoy.
Make sure you pre-order your copy of next month’s issue when it goes live on Saturday the 9th of October.* If you want to avoid all the fuss with pre-order dates, you can simply subscribe, and we’ll send your copy straight to your door each month – complete with exclusive full-cover artwork.