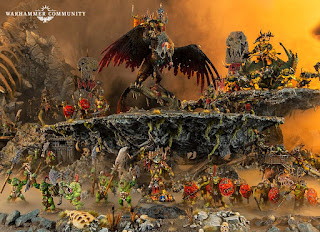 A couple Warscrollls for the for Orruk WarClans for new miniature releases coming this weekend. The Breaka-Boss and the Beast Skewer Killbow.
via WarCom
https://www.warhammer-community.com/2021/09/09/these-warscrolls-show-how-dangerous-the-kruleboyz-are-at-all-ranges/
Their fantastic damage potential makes both units excellent additions to a Kruleboyz army, so let’s take a look at their warscrolls for all the juicy details.
Breaka-boss on Mirebrute Troggoth
This deadly duo combines the cunning of a Kruleboyz boss with the primal strength of a Mirebrute Troggoth, the smellier cousin of the Dankhold Troggoth that the Gloomspite Gitz often coerce into battle. 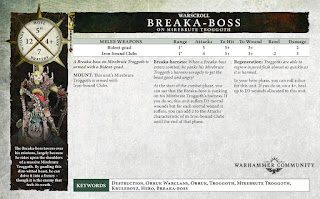 Thanks to the Breaka-harness ability, you can inflict D3 wounds to your Mirebrute Troggoth, sending it into a blind rage, with each wound giving you two extra attacks with its iron-bound club on top of the four it already gets.
At -2 Rend, and an immense 3 Damage, a rampaging minibrute is no laughing matter. Plus, the troggoth can regenerate D3 wounds a turn, meaning this brute is going to stick around.

Beast-skewer Killbow
The Kruleboyz are well known for using their menageries of beasts in battle, like the Sludgeraker and Marshcrawla Sloggoth. They’re also experts at killing giant Monsters, and the Beast-skewer Killbow is their most effective ranged weapon. 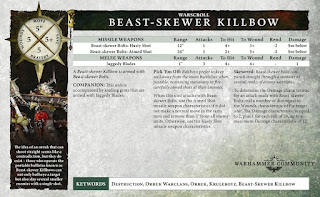 The already impressive range and reliability of the Killbow pairs well with the Big Yellers Warclan ability, netting you a tasty extra 3” range, as well as a reroll should you fail to hit. 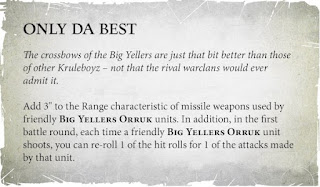 If your opponent has any threats hiding behind a pesky ward save, why not strip them of that safety net with Nasty Hex? Now you can ensure your savage bolts don’t find their impact blunted. 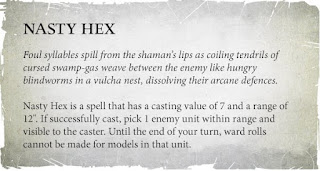