What's On Your Table: Black Templar as Grey Knights

Submit to  by sending in up What's On Your Table to 8 images of what you are working on in your  miniature wargaming hobby. Send them to natfka@live.com

Decided I loved the idea of my lore-insulting lost librarius templars counts as grey knight's.
Originally had a strike squad to make some honour guard and a few librarians from starter sets and such. Once upon a time they would have been an allied librarius conclave formation. I'm kind of happy that's gone though as I like this idea better.
Kept there Templar armour got blue robes and shoulder trim to tie to librarius
I also make an effort to enlarge all the old school marines as they're just a bit shrimpy these days.
Copius Green stuff has gone into each of there waists and thighs with a single primaris for size comparison.
The happiest epiphany was realising for very detailed marines (helbrecht) I could cut at upper chest instead of waist for far easier modelling work after.
Yep, high marshal helbrecht is apparently a psyker now.
-James 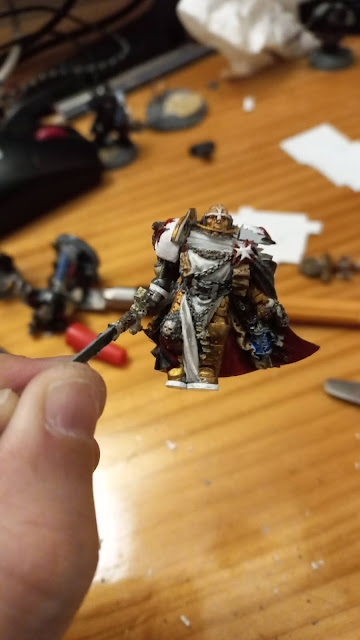