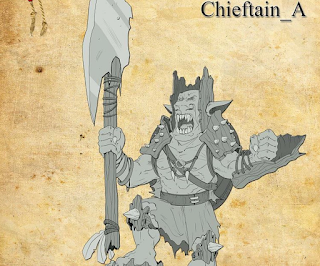 Shieldwolf's latest kickstarter has less than 36 hours now left on it. That means its on its final push to get funded, and your approaching it's last chance to fund the Forest Goblins. Its most of the way there, so if you are interested, now is your chance to get involved in the latest kickstarter.

This is Angelos. For those of you who haven't heard of me, I'm the owner and CEO of Shieldwolf Miniatures.
I would like to welcome you all warmly to this project and let you know what I have been thinking (and discussing with the rest of my Team), on how to make sure we all make this project reach as high as possible!
When designing the pledge levels for this project, I had to bear in mind the expenses already made, and which we would have liked to make back. That's on top of cofunding this project in regards to both tooling the plastics and covering shipping costs.
Unlike the Shieldmaiden Campaign where the big centerpieces were already available (Mammoth & twin-headed Dragon), for this campaign we had nothing. We didn't feel like giving a Wyvern to the Goblins, as we wanted to create new and exciting miniatures like the Brutgoth you've seen.
I admit the design of the locked pledge levels regarding this beast in order to make the cost back has done more harm to the campaign than good. Numbers are what they are and a 2500$ stretch goal would have covered the cost at least for the small version (the Forest Brutgoth).
While we trust the project will fund regardless, we mean to offer as much as possible via the power crowdfunding offers. In order to help out the backers that have unwaveringly placed their trust and hard-earned money in my company's vision, I have decided that I am going to foot the bill myself. This simply means covering the expense of it instead of waiting for backers to do it for us. The beast has been already designed and sculpted, so it's all about remaining production costs. We cast in-house, so that makes it an easier call to make.
This is therefore the new Stretch Goal Map. After which, I really can't do anything else about it. I have stretched myself to my limits, that's the last I am willing to do.

This makes the Stretch Goal Map become like this

If we manage to unlock all these, there won't be a 40K SG, the 42,5K SG remains the one we had initially planned for. I'd like to be clear on that also.
If this change isn't enough to tilt things to everyone's favor in what they desire to see unlocked, then hard as it may sound, this army was never meant to be brought to life.

We are also adding one more Character mini for the Forest Goblin race; the Goblin Chieftain_A, since spears being funded first makes it only appropriate.

The miniature will be commisioned to Paolo Fabiani, the same sculptor of the other Goblin heroes already sculpted and whom we have great faith will render justice to the concept artwork shown above. :-)


With this update, we are now sitting back along with many big-eyed forest creatures to enjoy a quiet weekend!
Thank you.
Angelos and the Shieldwolf Team.
9/27/2016
Natfka
Fantasy Battles: The 9th Age, Gaming News, Kickstarter, News Headlines, Shieldwolf Miniatures