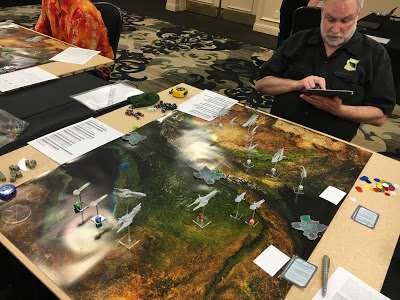 Any day we are expecting to hear about Dropfleet shipping, so its worthwhile to notice that Wayland Games has an event planned for Dropfleet hitting retail in October. As this was just announced it counts as the latest news for Dropfleet Commander.

Event Description
In anticipation of the forthcoming release of Dropfleet Commander, Hawk Wargames will be hosting the first official Dropfleet Commander promotional event on Saturday 8th October at the Wayland Games Centre in Hockley, Essex.

This event is a fantastic opportunity for players to immerse themselves in a day of Dropfleet Commander focused Gaming and Hobby. The event will run from 9am to 6pm.

Due to anticipated delivery time-frames for the Kickstarter, Dropfleet Commander 2-Player Starter Sets will be available for purchase on the day, with 40 sets available on a 1st come, 1st served basis (One per customer before 12pm, free sale while stocks last after this time).

In addition to this, participants who place pre-orders for Dropfleet Commander products on the day with will receive a free Scourge or UCM Cruiser sprue! (Each cruiser sprue can build 1 cruiser).
Please note that in order to qualify for these promotional sprues you will need to attend the event in person and participate in one of the planned activities. Choice of faction and ships available while stocks last.

Planned activities include:
Dropfleet Commander Intro Games
We will have 4 demo tables running pre-booked intro games over the course of the day. Intro games will take place over 3 specific time slots and places are limited, so if you are interested please submit a separate event ticket for the relevant time slot (tickets are free of charge).

Dropfleet Commander Hobby Workshop
We will have a large Hobby table set up for people wanting to build and paint their ships, and the Hawk Wargames Team will be demonstrating a basic guide on how to replicate the official faction paint schemes.

Designer Q&A with David J. Lewis
David will be in attendance all day to discuss the new game and answer any questions you might have regarding the game Dropfleet Commander (and also Dropzone Commander).