Home » How we play the game. » The Quest for the Holy Grail: Average Rolling Dice!

The Quest for the Holy Grail: Average Rolling Dice! 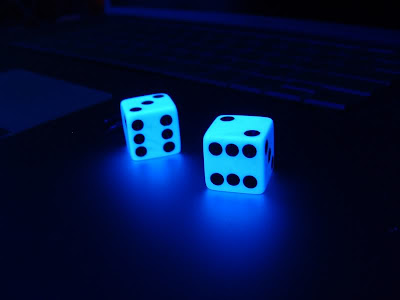 I have a thing for dice. Yes I have even bought them by the pound. So I have lots of dice. The problem I have with my own 40k games, is that I often get horrible dice results. I just cannot even get games in where I can get my dice to approach average results. Hence.... The Quest for the Holy Grail... Average Dice!

Here is a link to Part 2 of this article
http://natfka.blogspot.com/2012/07/quest-for-holy-grail-dice-part-2.html 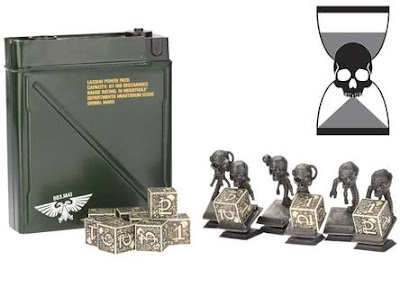 It should be said that the standard dice people buy for this game are horrible. I will let you read the study below on why, but they are bad. I am not a practiced roller (equivalent of cheating). The dice we gamers normally have are small hard things with rounded edges and pips in them. Scientifically these are bad.

The new munitorum dice by Games Workshop are excellent dice. The quality is actually very high. The edges are not rounded, they are light (great for our tabletop rolls), and the graphics on the dice are nice. Haters will be haters, but these are excellent dice. In fact I have had one game with them, and I can say that as someone who looks closely at how well I am "really" rolling and not "perceived" rolling, these dice did indeed hit average. Are these the Holy Grail? Only time will tell, but I for one will be putting them to the test.


This study was first written on Warseer several years ago, and the study was probably published elsewhere, but Warseer is were I first read it. here is the original link....
http://www.warseer.com/forums/showthread.php?65531-Do-you-roll-a-lot-of-1s-A-40k-must-read

Before any gamer begins this Holy Quest, he or she should definitely start with the following study. Enjoy......

A huge thanks to Yade for doing this for the community.
Background
I am an engineer and I teach at ASU. In the beginning of every semester there is a lot of book work that my students need to do such as circuit board design and circuit mapping. During this time I have 4 students and a giant mechanical engineering lab at my disposal. So I decided to use my students to improve my 40K game.


Setup
In the Spring semester of 2006 I decided to debunk the dice myth "I always roll more ones". So I took a box of the red and white GW dice, a cube of 36 chessex dice, 36 square corner dice with pips (pips are indentations on the side of dice to indicate the value of the face), and 36 Vegas style square dice with no pips.

I then constructed a series of plastic barriers that would be used to keep each die independent of the others. In the lab we have a table that is 4 inches thick solid slate built on hydraulic legs to keep balance and resist independent movement. On this table we put all of the dice in the rolling container and labeled each case, giving each individual die its own chamber and number. My 4 students then shook and rolled the dice 1000 times, recording each individual result. Each die was individually rolled 1000 times, so 4 sets of 36 dice (144 dice) rolled 1000 times equals 144,000 rolls. Each die was tracked on its own and kept separate from the rest.


Results
Afterwards we calculated the results and the Chessex and GW dice averaged 29% ones. Mind you that this is an average and our high was 33 and our low was 23. We removed any statistical anomalies and came up with 29%.

Game room logic, a poor source of anything, would dictate that the side with the one is heavier and would therefore be on the bottom more. Unfortunately this is just not true, take popcorn or batholiths as an example. The 6 is too light to stop the momentum of the die, the rounded corners cannot prevent the die from turning due to the weight. In the end 1s are by far the most common result. On a 6 sided die any given number should appear 16.6% of the time, the Vegas dice were dead on and the square dice with pips were pretty close, only displaying a 19% ratio for ones.

I contacted the casino Caesar's Palace in Las Vegas and accessed their research, after much duress because they wanted to make sure I was not some gambling shark, and they had results that corroborated mine.


Following up
I then proceeded to buy more GW dice and we filled in the corners of the very same dice that we used, carefully melting the new plastic on to the old dice and filing in the corners to the right size and leveling them to .001 for accuracy. The dice then rolled more accurately but still 19% rolled ones. Over 1000 rolls from 36 dice (36,000 rolls), this variance from the expected values is just not acceptable and cannot be considered truly random.

Finally we dissected all of our dice and looked for air pockets or constitutional inconsistencies. We found a few and compared those to the results of the rolls of that individual die and there was no consistent affect generated by the dice with plastic seeds but there was one with dice that had air bubbles. We dissected the dice using a hydrogen cooled diamond saw which prevents the blade from heating up and scarring the soft plastic. Which you can imagine would melt and tear at the presence of any heat or undiverted pressure.

I sent a copy of the study to Chessex and their official response was to inform me that the amount of plastic saved from rounding the corners and hollowing out the pips of 2 dice actually gave them enough left over plastic to make a 3rd die. Economics wins.

We thought about using metal dice and because they are so heavy the weight differential is going to be significant compared to plastic dice. The ratio is so much smaller that we speculated that metal dice would be a lot more likely to be average and accurate though we did not test this assumption directly.

Lower numbers rolling more frequently is not entirely logical as the heavier part of the die ends at the top. I submitted my results to a friend in the physics department. On the original outset he also agreed that the results were counterintuitive. But he proceeded to test my theory because the results were overwhelmingly in support of the opposite expectation.

Interestingly, the data from Caesar's Palace proved that the dice were more likely to flip once than anything else. If you held the dice in your fingers and had the 1s face up you were more likely to roll 6s because they are on the opposite side. They were using Vegas style dice when they conducted this study. There is definitely a correlation to the way that the dice are thrown. Consequently if you go to Vegas now and you do anything at the craps table the way you roll the dice is heavily monitored. If you palm the dice at any time they are removed. You have to hold the dice in the tips of your fingers and when you toss them they have to hit the table and a wall in order to be considered a valid toss!


Conclusion - Casino Dice!
My own criticism of my study is that the nature of it was observational. It is possible, though highly unlikely, to toss a coin 144,000 times and always get heads. Does that disprove the existence of tails? Not at all.

My conclusions are highly probable and very accurate, in my opinion, based upon our results. Which in the interest of science were truly unmanipulated and random.

So I advise players to use square-cornered dice with no pips and only buy clear ones, like in Vegas, so you can see if there was a problem with the making of the dice. This is not going to prevent you from having a bad dice day but it will better ensure that you have some level of consistency.

One thing to consider is that all games workshop games (and most boardgames in general) are designed with these dice and so should reflect this in the gameplay accordingly. If you see somebody using games workshop dice for leadership tests and vegas style dice for everything else, then you can be sure that they are trying to get an unfair advantage though! Try to ensure you are using the same dice as your opponent.