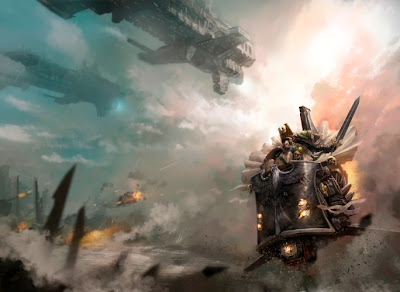 Here are some details that have been sent to me about the next several months release schedule for Warhammer 40k. From the looks of things, August is an enormously full month, and if these pan out, September and October will be just as exciting.

We were given this exclusive set of information for Faeit 212. I am hopeful that for whatever reason the White Dwarf being pushed back does not mean that the release for August is going to be changing. With Chaos Marines just around the corner and Dark Angels on the very near horizon, this is the kind of schedule we dream about for our hobby.

An Exclusive for Faeit 212 (from the inbox)
A lot of stuff has been circulating recently and I really don't know where they're getting it from. I just wanted to sort of set some of it straight.

The new flyers (1 of which being chaos) and the Chaos Space Marine book and initial waves are both done and in some cases even distributed to warehouses.

The current itinerary for release is New Flyers plus the Chaos book and half the models for August.

Then it's Dark Angels and their ENTIRE new range in October.

It's a whole lot coming really fast and there's a little bit of resistance (from certain people) on the release of the flyers and chaos all at once.

That said, August's white dwarf has been pushed back for reasons I do not know. In the past, however, the only reason for White Dwarfs to be pushed back, however, have been last minute removal of content and articles, never additions.

This month had so much content potential that about 80% of it ended up on the editing room floor, so it wouldn't be difficult for them to fill a magazine back up if they were cutting chunks out of it.