Thunderwolves Being Worked on 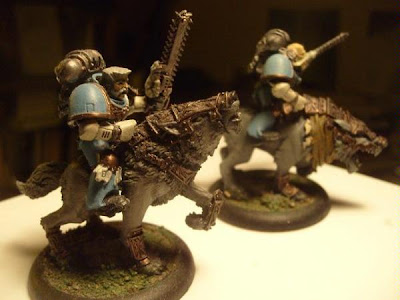 Thunderwolves are a model I think we should of seen ages ago. It would of made the Space Wolf codex release shine to see these models released at the same time as the codex launch. Now that its been over a year or so, many people have given up on seeing Games Workshop produce such a model. Many people have created their own.


Today's rumor is from Forgeworld staff at Games Day UK. I think he kind of slipped up on this question, because I am sure his answer should of been "The Forgeworld Teams are not working on one, I don't know about Games Workshops studios." Instead he indicated that "someone was working on them". Meaning Games Workshop has a model in the works. I know rumors have said that we would see one this fall, and many Space Wolf players were really looking forward to Games Day UK to see one.

Its only a small bit of info, but one that we all wanted to hear.

Tony was asked re Thunderwolves and his answer (to me at least) implied that FW weren't doing them but "someone" was. I'd guess a GW one is on the way.
9/27/2011
Natfka
Games Day , Rumors , Space Wolves