New tales of Forbidden Power are up today and free to download.


via the Warhammer Community
https://www.warhammer-community.com/2019/05/24/tales-of-forbidden-power-the-black-depths/

King Ecraviir Blacktide leaned out of Savrentis’ saddle and slashed out with his glaive. The enchanted weapon carved through the neck of a spectral rider, and the Hexwraith split apart in a burst of vile green light, its skeletal horse galloping on for several paces before dissolving into nothing. The king’s Deepmare roared in furious delight, and thrust its horn through the cloaked form of an axe-wielding, skull-faced horror. The Deepmare shook its great head and tore the dead thing apart.
‘Akhelians, attend your king!’ Blacktide shouted above the mindless shrieking of gheists.
Only a score of his Morrsarr Guard answered the call, soaring gracefully through the chaos of battle, the shimmering magic of the aethersea guiding them on. Bringing their Fangmora steeds to a halt, the royal retinue formed a wall of shields and gleaming scales about their liege-lord. The young Prince Isaphen led them ably, crackling voltspear blasting through the spirits that attempted to block their path. Blacktide was satisfied once again that he had chosen the very best lances in the Dwindlesea to serve him.
‘Tidecaster Mue’wann holds our left flank still,’ the Lochian Prince said. ‘But his thralls are sorely pressed. The enemy assails them from all sides.’
‘In death, the Namarti serve,’ Blacktide said, waving a dismissive hand. Every Namarti Thrall was worth a hundred human lives, but he would sooner they were all slain than lose any more of his Akhelian nobles – too many of the warrior caste had fallen already.
Blacktide’s charge across Lake Lethis had driven the Nighthaunt all the way to the shoreline with spear and surging tide-magic, but that momentum had come at terrible cost. The corpses of scores of slain Namarti bobbed in the black waters that lapped along the rocky beach, and even mighty Grymscale had fallen to the cursed lances of the dead. The Leviadon lay slumped across a pile of shattered masonry, its leathery hide withered hideously by necromantic magic, dead aelves draped across its vast shell. Blacktide’s anger rose to see such a magnificent creature laid low.
‘Too high a price,’ he muttered.
Whatever secrets lay beneath the mausoleums and cemetery sprawls of Lethis could not be worth such losses, no matter what Soulscryer Nammos might say. At the urging of the Isharann priests, King Ecraviir and his court had come to the Raven City to treat with the landbound peoples, drawn by whispered tales of arcane engines that sapped the mind and stole away the memories of any who drew near – a powerful tool indeed, for a race such as the Idoneth, who thrived on secrecy and isolation. But what use would such treasures be if his armies were destroyed on the banks of this accursed lake?
‘We should not have left the deep places,’ he muttered.
With every passing moment, more spectral creatures spilled out of the viridescent clouds above, encircling the Deepkin and cutting off any chance of retreat. 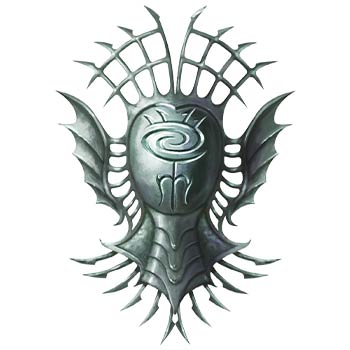 ‘Where are the city dwellers?’ said Isaphen. ‘Do they not see the doom that closes in on them? Why do they not ride to aid us?’
‘They mistrust us almost as much as they fear the dead,’ said King Ecraviir. ‘Our alliance is a fragile, newborn thing.’
‘My king,’ said one of the Morrsarr, pointing his lance at the right flank, where a thinning line of Namarti Reavers held the treeline that bordered the lake. They were sending a stream of arrows hissing into the thick of the Nighthaunt ranks.
Shapes were advancing from the darkness of the forest. They emerged onto the beach in their hundreds, marching in lockstep with spears levelled. Skeletal warriors, with yellowed bone and rusted, dripping armour. With methodical precision they butchered the outnumbered and encircled Namarti, thrusting their spearpoints into bellies and ribcages again and again.
‘To me, Akhelians,’ Blacktide cried, twirling his glaive and guiding Savrentis towards this new threat. ‘We break them at the forest’s edge.’
Even as he kicked his Deepmare forwards into a breakneck charge, Blacktide saw the path ahead blocked by a fresh horde of spirits. Whether guided by strategy or hateful instinct, a swarming host of Chainrasps had surged between the trapped Namarti formations and King Ecraviir’s Akhelians. At the head of the gheists rode a ghostly knight, wearing a winged helm covered in patina of rust, a greatsword clasped in his fleshless hands. Blacktide recognised a leader when he saw one – lesser spirits seemed to flock about the helmed knight like zethyrfish around an Allopex.
‘That wraith-liege is mine,’ growled Blacktide, gesturing towards the ghostly figure before releasing his grasp upon Savrentis’ reins. Switching his glaive to his left hand and setting it tight against his shoulder, the Akhelian King drew a falchion from the sharkskin scabbard on his back.
To the thunder of void drums the king’s retinue charged, cries of vengeance and death upon their lips.
They were but a few hundred paces from the spectral host when the skies turned black as the abyss, and shadows engulfed the battlefield. Looking up, Ecraviir saw stormclouds coalesce above the shore of Lake Lethis. Crackling arcs of lightning played across the skies; not the searing white bolts of a summer storm, but a blazing amethyst that strobed the corpse-strewn battlefield with purple light.
The clouds parted and great columns of violet lightning roared through the air and slammed to the ground amidst the Nighthaunt mass. They struck with deafening blasts, sending up great gouts of sand and shattered spirit-stuff. Blacktide hauled back on Savrentis’ reins, shielding his eyes from the blinding glow of the lightning bolts. As the painful after-image ebbed from his vision, the Akhelian King saw burly figures emerging from craters blasted in the soft earth. Obsidian statues, wearing funereal masks and carrying hammers and blades that spat forks of purple lightning. These giants smashed into the midst of the spectral force, swinging their immense weapons as if they weighed nothing at all. Each blow shattered a Chainrasp into motes of sickly light, or blasted a spectral rider from his steed.
‘The men of lightning,’ whispered Prince Isaphen, a note of awe in his normally taciturn voice.
The Anvils of the Heldenhammer, protectors of Lethis, had come – as they had sworn they would. A grim smile flickered across Blacktide’s lips. Perhaps the deep would not claim all his warriors this day.
Greatest of all the black-clad giants was a figure mounted upon a draconic beast. Amethyst light played across this one’s golden pauldrons as he smote his foes with an immense grandhammer, striking left and right with a speed that seemed impossible for one so large. The champion was chanting as he slew. Not a wrathful battle-cry, but a sombre dirge that drifted mournfully across the field of battle, and was echoed by the lips of the black-armoured warriors.
‘He fights well,’ said Isaphen. ‘For a human, at least.’
More and more bolts of lightning were slamming down from on high, unleashing more Stormcast Eternals into the thick of the fighting. Shadows flickered across King Ecraviir, and he looked up to see glorious winged figures sweep across the skies, hurling javelins that sank into the Nighthaunt mass before detonating in a blinding spray of lightning.
‘Come,’ Blacktide roared. ‘Let us show these humans how the warriors of the deep make war!’
With that he urged Savrentis forwards. Ahead, the wing-helmed knight that led the Nighthaunt charge was exchanging blows with the Stormcast lord, sparks flying as hammer met cursed blade.
A weapon in each hand, Blacktide urged his Deepmare forwards, making for the duelling warriors. Skull-faced spirits swooped down upon him as Savrentis soared through the carnage, their chill breath causing bitter rimefrost to creep across his armour. The wretches met nothing but the killing edge of his blades.
Then he was through the swirling mass of incorporeal forms, bearing down upon the Nighthaunt general still locked in single combat with the Stormcast lord.
‘For the Cythai!’ he roared, and the spectral knight’s rusted helm swivelled to face him. ‘For Volturnos, and the First Enclave!’ 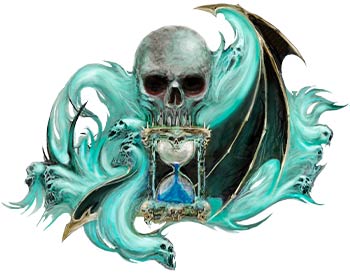 Blacktide thrust his glaive straight into that eyeless face, and felt an icy pain shiver up his arm as the weapon sank deep into ethereal matter. The ghost-knight began to shiver and flicker, his helm crumpling, his verdigrised blade crumbling to dust. Blacktide hacked down with his sword, and with that blow the entity came apart in a burst of deathly green light.
With the spirit’s unmaking, the swirling Nighthaunts seemed to lose their cohesion. The flanking charge of the skeletal spearmen had been broken, driven back by the violent assault of the Anvils of the Heldenhammer. So too did Blacktide see his own warriors regrouping, the Morrsarr Guard wheeling and charging again and again into the flank of the ghostly horde, unleashing blast after blast of biovoltaic energy. For now, the enemy had been repelled, but it would be nothing but a temporary reprieve – the emerald glare of balefire shone on the horizon, growing more potent by the second.
King Ecraviir heard a low snarl, and turned to stare into the face of the Anvil leader’s reptilian mount, its eyes narrowed. Savrentis hissed in kind, lowering its own horned head. The Stormcast Eternal patted his steed’s flank, and gave a deep bow. His eyes were pools of violet light that blazed within that merciless war mask.
‘Sea-King,’ the black-armoured warrior said, in a deep and rasping voice. ‘I am Lord-Celestant Vanderghule of the Soulguard, and it is mine honour to command the city’s armies. Thou hast fought well this day. Neither Lethis nor the God-King shall soon forget it.’
‘Tell it to the dead,’ said King Ecraviir. ‘Too many of my kin have been sacrificed already.’
‘The debt shall be repaid,’ said the armoured giant, nodding. ‘Thy bravery hast earned us precious time, but death does not relent. We must retreat, to the walls of my city. The hour is won, but the battle for Lethis is yet to begin.’
Looking out across the pitch-black waters of the great lake, King Ecraviir saw a spectral host larger even than that which they had just hurled back at such cost, swooping in over the lake towards the city. Yet more grave-lights burst from the summit of the distant mountain that loomed over Lethis, spilling down the sides of the titanic edifice like emerald lava. Ecraviir had never seen such a vast gathering of spirits.
‘It seems that Nagash has emptied the underworlds entire to ensure that Lethis falls,’ he said, awestruck by the terrible sight. ‘Tell me Vanderghule, what has your God-King hidden beneath this place that inspires such bitter fury?’
‘Pray thou never knowst that truth,’ the Lord-Celestant said. ‘But know that if the Raven City falls, such death as thou hast witnessed today shall be nothing to the nightmare unleashed upon the Mortal Realms.’
By Nick Horth