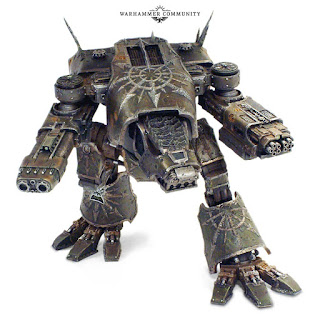 The Chaos Warhound Titan is one of the first Titans I saw way back in my early days of tabletop wargaming. Its coming back and will be ready for warhammer 40k. That is awesome and is well within reason (financially.... its not a Warlord) to get for your upcoming games.

via the Warhammer Community
https://www.warhammer-community.com/2019/04/22/the-chaos-warhound-titan-marches-back-to-war/

The ground shakes and the followers of the False Emperor quiver in fear – it can only mean that the Chaos Warhound Titan kit is coming back for Warhammer 40,000! These once glorious god-engines have been corrupted by the Ruinous Powers, and with its re-release you’ll soon be able to bring death and destruction to the Imperium.

The Chaos Warhound Titan is the easiest class of Titan to fit into a Warhammer 40,000 matched play army* and it would also make a fantastic addition to narrative and open play games. Not only that, but with a new version of Apocalypse coming for Warhammer 40,000, now is the perfect time to add one to your army, in preparation for battles on a massive scale.
4/22/2019
Natfka
Forgeworld, Warhammer 40k