A new turned based strategy PC game has been revealed Adeptus Titanicus: Dominus. In the game, you control of the Imperium's Titan Forces. Not much is known at the moment, but we will be watching closely to see what comes of this. 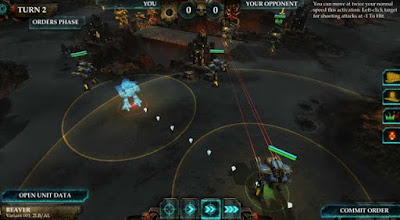 Adeptus Titanicus: Dominus, the 3D turn-based strategy PC game adaptation of Games Workshop’s classic Titan Legions tabletop game, puts you in control of the greatest weapons available to the Imperium of Man, the mighty Titans of the Adeptus Titanicus!

Available soon on Steam Early Access, Adeptus Titanicus: Dominus features a Skirmish mode against an AI opponent for single-player and an online multi-player mode. Upon full release, the game will also offer an exciting single-player campaign.

The Titans Owner Club has an article up that has little bits of information.
http://titanownersclub.blogspot.co.uk/2018/04/adeptus-titanicus-dominus-announced.html
4/30/2018
Natfka
Video Games, Warhammer 40k