More Hints and Whispers for December 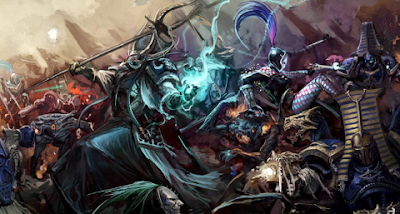 Thousand Sons and Sisters of Battle are on everyone's minds when it comes to December releases from Games Workshop. We have heard previous rumors revealing a big thousand sons release followed by hints at the end of the month of a Sisters of Battle Cannoness.

These rumors are what is being referenced from this source.
http://natfka.blogspot.com/2016/11/warhammer-40000-releases-for-december.html
Daemon Primarch Magnus
Plastic 40k Ahriman
Plastic Rubric marines
Plastic Rubric terminators
40k Tzaangors (bizarre but asked twice regarding this)
Sorcerer Cabal (Not sure if new models or re-packaging)
and at the end of december; Plastic Canoness for Sisters of Battle.....

The books are supposedly War Zone Fenris 2
Traitor Legions (not known if a rules book, an art book)
supposedly 8 mega force bundles in december between 40k and AOS (even split)

via anonymous sources on Faeit 212
Tzeentch/Rubricae:
The info you already have is spot on. Arrives with/alongside Warzone Fenris 2. Soon.

Sisters info: It's not just a Cannoness.