More on the Line- Sisters of Battle 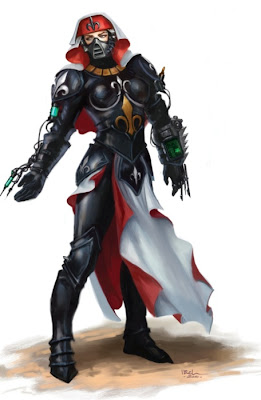 We are all shocked by the Sisters of Battle coming out as a White Dwarf release, but perhaps there is something in the future besides a pdf release. There is a lot of talk about how bad this will be and how GW promised they would never do another White Dwarf (pdf) codex. But, here we are......

Of course this also sounds like a little bit of wish listing, but perhaps there is some truth to it. We did hear originally that Sisters of Battle will be getting a codex in November, so could this just be a prelude?

These are more speculation than rumor. So please take these as possibilities, not rumors.

via Polaria
WD Codex will come out at the same time with 1 or 2 plastic sets and some finecast stuff. The WD codex will not, however, 'push' back, 'delay' or 'be the death of' Sisters of Battle as a line. A full Codex and the full-size release will come out in 2012. Think of this as prelude wave. Or a sneak peek.

there was the mysterious comment by Stickmonkey saying "Sisters love their rides", which some people interpreted as Sisters of Battle bikers and others as something totally different... (repressors)
6/11/2011
Natfka
Rumors , Sisters of Battle