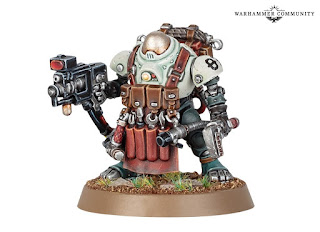 Not my favorite sculpt from GW when it comes to the Leagues of Votann, but it will do. Might look better in person and among the rest of the army.... Lets hope.
via WarCom
https://www.warhammer-community.com/2022/06/06/lore-of-the-votann-introducing-the-ironkin-mechanical-members-of-the-leagues/ 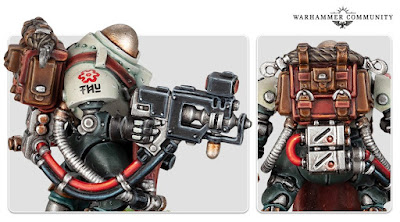 The Leagues might want to be a bit more subtle about the Ironkin. These are true mechanical intellects, created by the Votann – and they’re computationally advanced enough that they’ve learned to mimic Kin social behaviour, fully integrated into League society as equal partners. Whether made from meat or metal – Kin are Kin.
Each Ironkin consists of a Cerebral Unit – woven with microfield generators that make it very hard to destroy – and a unique mechanical body. An Ironkin’s body isn’t just some component to be replaced – it’s deeply personal, as much as the bodies of their fleshy cousins, and designed to fulfil a certain niche, such as mining support units, cargo luggers, combat pilots, or shock troopers. Some Ironkin even serve as Wayfinders, whose accelerated logic-cores help them cogitate probable paths through the warp.
The purpose of the Ironkin is to support the Kin in every aspect of their lives, but it’s important to know that they’re not held in servitude, nor treated as lessers. They’re simply designed to want to be helpful. However, as artificial beings, they can only imitate the emotions of their biological fellows – it’s rare (but not unknown) for an Ironkin to possess ambition, or seek to become a leader.