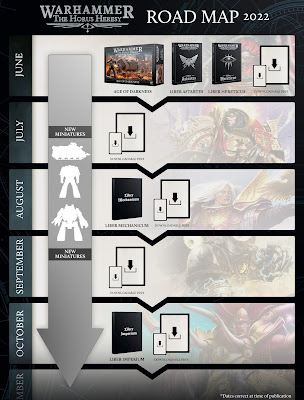 This gives us some idea next to the rumors we have had in the past which have turned out good so far.
via WarCom
https://www.warhammer-community.com/2022/06/07/warhammer-the-horus-heresy-road-map-the-age-is-dark-but-the-futures-bright/
Warhammer: The Horus Heresy – Age of Darkness is officially now available to pre-order, and this absolutely prodigious boxed set will be winging its way to you from the 18th of June. But that’s not where all this Heresy business ends – there’s already a legendary muster of new books, plastics and accessories, with plenty more coming to support the new edition this year and next.
And to prove it, we’ve prepared a comprehensive road map of the new rules on the way.
…and that’s just what’s coming in the next couple of seasons! That’s four faction books – one each for the Loyalist Legions, the Traitor Legions, the Mechanicum,* and Imperial forces sworn to neither the Primarchs nor the Omnissiah.
These will all be supported by Legacies of the Age of Darkness, free downloadable PDFs which contain rules for old Forge World models that aren’t at present planned to return to the current range, so you can use your existing models in the new edition. And on top of that, two additional army lists will be available to download for other factions – the Daemons of the Ruinstorm, and the Imperialis Militia and Warp Cults.
6/07/2022
Natfka
Horus Heresy, Warhammer 40k