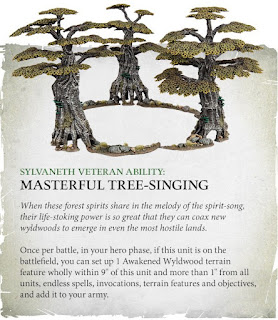 Battletome Sylvaneth is coming to preorders on Saturday and today we are getting a little preview of new Path to Glory rules
via WarCom
https://www.warhammer-community.com/2022/06/15/spread-the-blessings-of-life-with-the-sylvaneth-path-to-glory-rules/ 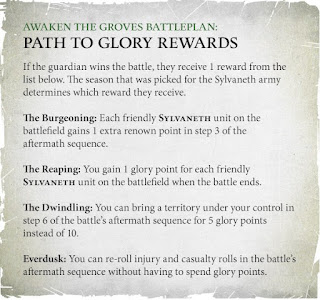 When choosing your Path to Glory army for a game, you begin by putting on your gardening gloves and selecting one of the Sylvaneth’s Seasons of War. As you cycle through the four seasons, from Burgeoning to Reaping through to Dwindling and on to Everdusk, (and it’s got to be done in that order!) you can spend your hard-earned glory on expanding your Wyldwood into an Imposing Wyldwood.  As with a regular stronghold, you can then expand further – branching out to become a truly Mighty Wyldwood!
While planning on exactly how to plant your seeds, you can choose from four new quests for your Sylvaneth army. For example, you could complete the Begone, Intruders quest (once again you’ll need to fight a Path to Glory battle in each season) to unlock the special Awaken the Groves battleplan.
Emerge victorious from that battle, and your army receives a specific bonus based on the particular Season of War you selected before that fight. 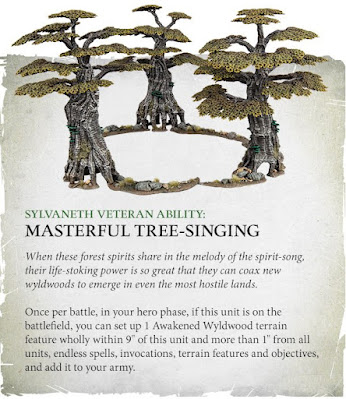 Battletome: Sylvaneth also contains a bumper crop of faction-specific veteran abilities. Ever wish you could just whistle and have a new Awakened Wyldwood appear on the battlefield? Upgrade one of your units with the Masterful Tree-singing veteran ability to make it easier to get your army to where it should be going, and harder for your opponents to find their way out of the Wyldwood.