The Lady of Vines- Echoes of Doom Boxset 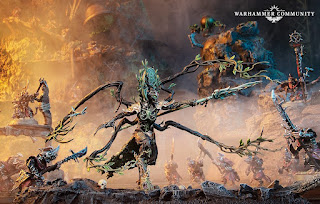 The Lady of Vines is an amazing looking miniature that is part fo the Echoes of Doom boxset coming this weekend to preorder. Check out the rules and how she will operate on the battlefield.
via WarCom
https://www.warhammer-community.com/2022/05/16/cultivate-dryads-and-protect-allies-with-the-lady-of-vines-the-embodiment-of-natures-wrath/ 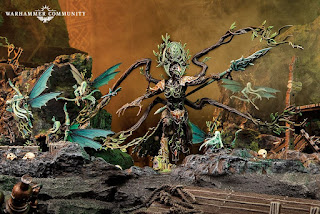 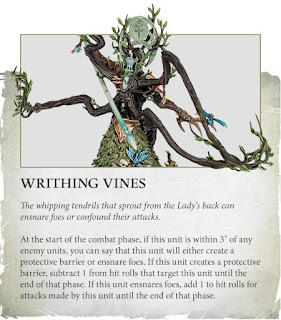 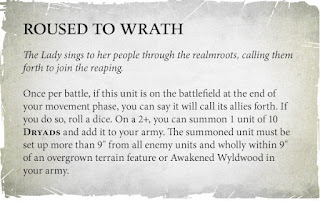 In war, the Lady of Vines is a force of nature. Her martial song ensures the Forest Folk are Roused to Wrath, causing vengeful Dryads to sprout and bloom directly into the midst of battle. Once per game, you can use this ability by rolling a dice – on a 2+, you summon a fresh crop of Dryads from a suitable forest, ready to fight to the death.***
The Lady of Vines wields a truly deadly spear – named Kurnotheal’s Wrath, it was grown from a splinter of the weapon once wielded by the Sylvaneth’s fallen Hunter God. She’s an equally adept spellcaster, however – by her very nature, she’s overflowing with Alarielle’s own Ghyranite energies, and can sling a variety of deepwood incantations at her foes.
In particular, she can manifest the Aspect of the Everqueen, turning this overgrown Branchwraith into a beacon of divine glory. Casting this spell grants every SYLVANETH unit wholly within 12″ a formidable ward of 5+, perfect for making already-resilient warriors like Kurnoth Hunters or a Spirit of Durthu even harder to fell.

Between impaling those who would desecrate the forests, summoning bloodthirsty bouquets of Dryads, and shielding her allies with magical wards, the Lady of Vines is a busy woman – luckily, her eponymous vines thrash about with a mind of their own. Now that’s multi-tasking!
In the combat phase, she can create a protective barrier out of her Writhing Vines, forcing foes to subtract 1 from hit rolls against her as their blows glance off iron-hard bark. Or if a vengeful mood takes her, she can instead use these barbed creepers to ensnare her enemies, adding 1 to her own hit rolls.
Truly, the Lady of Vines is a woman for all seasons – be it the burning wrath of summer or the biting inevitability of winter. And as Echoes of Doom is hitting pre-order this weekend, you’ll be able to field her in your own Sylvaneth armies very soon.

Battletome: Sylvaneth and Battletome: Skaven will be coming shortly after, both packed with new battle traits and a plethora of ways to play with armies covered in fur or foliage.
5/16/2022
Natfka
Age of Sigmar, Echoes of Doom, Skaven, Sylvaneth