Rules for the Iron Warriors 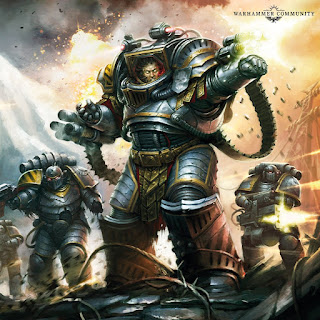 The Iron Warriors are featured today showing us some rules for how they will operate in the Horus Hersey. Lets check out the latest Horus Heresy reveals from WarCom.
via WarCom
https://www.warhammer-community.com/2022/05/12/legions-of-the-horus-heresy-break-down-walls-with-the-iron-warriors/

While the First Legion were awarded the Emperor’s gold stars for winning trivial battles against techno-barbarian pushovers, the Iron Warriors had to hone their craft on the coalface of war – thankless sieges, grinding offensives, and oppressive garrison duty. Never ones to take sick days or ask for a raise, the IV Legion did what needed to be done with the kind of stoic acceptance all Space Marines should aspire to.
Like their Primarch, the Iron Warriors were engineers as well as warriors, and excelled in the study of cunning mechanisms and architecture – a shame they were only ever called upon to blow them up. It takes a keen appreciation of the builder’s craft to know exactly where to swing the hammer, and as the blue-collar workers of the Legiones Astartes, the Iron Warriors were always ready to demolish construction that wasn’t up to code.