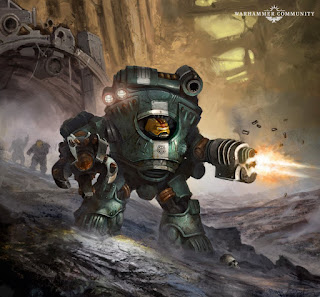 Of course a walker is needed for the Squats... Leagues of Votann. It definitely brings additional firepower to the table and looks rather.... well, you decide.
This appears to be part of the Necromunda Ironhead Squat Prospector gang, but will come with rules for Warhammer 40k 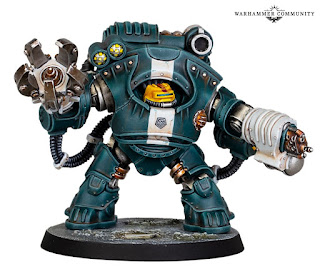 Sometimes, though, you need something a little bit bigger to accompany your Prospectors on their most dangerous digs. Sometimes, you need the Vartijan Exo-Driller.
These suits of rugged exo-armour were originally designed to protect Squat miners in the most hostile environments – and the ash wastes definitely qualify. They’ve been upgraded over the centuries with heavier weapons and better defences, and Prospector gangs now bring them along to fight off Ash Waste Nomads or other hostiles trying to claim the prime dig sites out in the Necromundan badlands.
The Vartijan Exo-Driller is a widely-used variant, named after the legendary Squat engineer Valya Vartijan, of the Svardhol mining clan – make sure you give thanks to her every time it stomps an enemy fighter into jam. Aside from its piston-powered pulverising fist and seismic crusher, the suit’s also armed with a Squat-made heavy flamer – which can be replaced with a heavy bolter for even more serious killing potential.