Leagues of Votann Armaments- Lets Look at their Guns! 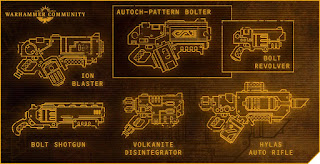 While are not quite getting stats on these guns, WarCom today gave us a couple graphics depicting the weapons we will be seeing. Lets check them out!
via WarCom
https://www.warhammer-community.com/2022/05/20/lore-of-the-votann-ancient-quasi-divine-machine-intellects-make-for-decent-gunsmiths-it-turns-out/

The Leagues of Votann are still a few months out from making first tabletop contact with the rest of the 41st Millennium, but after learning about the Ancestor Cores and the cloneskeins, we’re all agog for the main course – the guns. 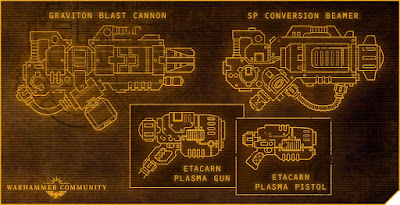 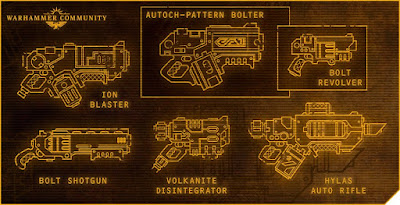 From the Autoch-pattern bolter to the Etacarn plasma gun, many Kin weapons bear superficial similarities to Imperial weapons, but they’re superior in every respect. There’s a clear shared ancestry between the bolt revolver and bolt shotgun and the bolt weapons of the Adeptus Astartes, but Kin weapons simply work better and hit harder.
Then there are items like the volkanite disintegrators, which use technology since lost to the Imperium, or ion technology, which is proscribed by the Adeptus Mechanicus. That’s their loss – the T’au Empire certainly seemed to appreciate being taught how to harness it…
All these weapons are supported by smart tech integrated into Kin battlegear. The haptic utility nerve transmission recalibrator modules – HunTR for short – interface with their neural augmetics to establish a feedback loop between firearms and their users. This system projects minute gravitational pulses to maintain a stable firing platform even while running at full pelt – or zooming along on a flying trike.