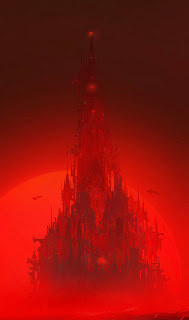 Players take on the roles of citizens of the Imperium in service to a powerful patron, with games focused on investigation and intrigue. The Imperium is a deadly place, and the players must tread carefully if they hope to survive. Your service to your patron allows you to move through Imperial society where others can’t. The Influence you and your patron have with the many factions of the Imperium will determine how your investigations proceed, where you can go, and what resources you have access to.

Imperium Maledictum takes place in the Macharian Sector, named for Lord Solar Macharius, and will allow players and GMs to explore the sector as never before. The Imperium Maledictum core rulebook gives players and GMs everything they need to begin playing, including a guide to the Macharian Sector, patrons to serve, and enemies to face. Future books will focus on specific factions, allowing players to take on the roles of agents in service to a powerful Inquisitor, or perhaps as dedicated servants of the Ecclesiarchy.