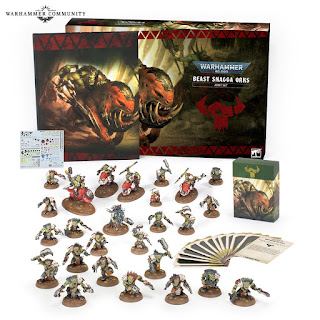 Rules that will be found coming with the new Beast Snagga boxset for the Orks are revealed today.
via WarCom
https://www.warhammer-community.com/2021/07/15/check-out-these-brilliant-new-beast-snagga-rules-before-a-squig-eats-them/
As diverse and volatile a group of Orks as ever there was, the Beast Snaggas are united by their universal abundance of scar tissue, bionic limbs, and a shared desire to fight things bigger than themselves. The Beast Snagga keyword not only gives these units a 6+ invulnerable save, but also +1 to hit rolls made against Monsters and Vehicles, which seems like a pretty good starting point.
Choosing Your Clan 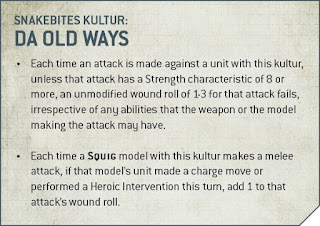 If your army is Battle-forged, it can take advantage of this updated Snakebites Clan Kultur. Da Old Ways will dial that already ’ard-as-nails Beast Snagga survivability up to 11, while also lending further credibility to that most ancient Orkish adage, ‘squigs iz good for bitin’ fings’. Though, as we’ve already learned, squigs can also do so much more.
Zodgrod Wortsnagga

Beast Snagga leadership may be a violent and transient experience for most, but Zodgrod Wortsnagga has stood the test of time. The legendary Runtherd is more than just a force multiplier for his Super Runts – although he certainly is that too. Exiled from Ork society for being too nice to his Gretchin charges, there’s a reason he eventually found a home with the Beast Snaggas.
Beast Snagga Boyz
Beast Snagga Boyz can run in units between 10 and 20 strong, which means they play a slightly more specialised role than ordinary Boyz. These fighters may mob together in smaller numbers, but they make up for it in brute hitting power.
An extra point of Strength means their attacks, though fewer, are more able to break through the hides of anything they fight. What’s more, their Strength 6 thump guns are much more likely to put the hurt on any heavy infantry that might get between them and whatever it is they’re trying to snag. 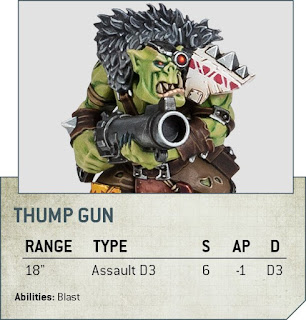 To da Squigs
At the heart of any squig-heavy Beast Snaggas army, you’re sure to find a solid core of Squighog Boyz. There are many good reasons to take them in your army, but before we examine the rules, let’s appreciate how great they look charging into some Ultramarines.
Tough, determined, and armed to the teef, these living battering rams comprise a fast-moving cavalry unit designed to get up close and personal. Armed with an arsenal of weaponry, including stikkas, Bomb Squigs, and their mounts themselves, Squighog Boyz and their red friends are unleashing relentless flurries of attacks, and they’re perfect for dealing with light Vehicles. 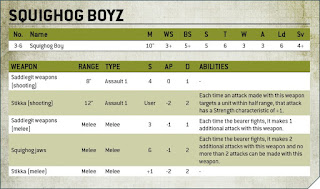 Power them up with the Monster Hunterz Stratagem, and for 2 Command points, these lumbering symbiotes can take down far larger prey. 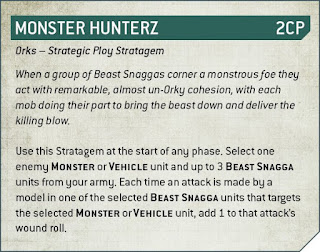