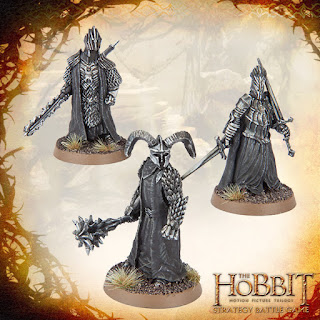 New this morning from Forgeworld are the Nazgul of Dol Guldur 2.

from the Warhammer Community
Two weeks ago, a trio of Ringwraiths hit Middle-earth tabletops in a new form, as The Nazgûl of Dol Guldur 1 set was released. The keenly observant among you may have noted that the number at the end suggested a second set of Sauron’s most feared servants was coming – and you were right. Today, you can order three more of these former Kings of Men as they were depicted in The Hobbit: The Battle of the Five Armies™.


Appearing at Dol Guldur in a very different form to that of the Black Riders, at this point in their existence the Nazgûl are much swifter with a blade than the robed figures that appear many years later. Summoned into being by the Necromancer of Dol Guldur, the Nazgûl engage the White Council in a grim ballet of whirling blades and darting movement. Able to constantly return to battle once banished, the servants of the Dark Lord are a deadly foe unlike any the White Council has ever faced before.

This multi-part resin kit contains the components necessary to assemble The Nazgûl of Dol Guldur 2, 3 Middle-earth™ miniatures. Each is remarkably sinister, with heavy robes, armour, spiked helmets and cowls obscuring their true forms, with grim weaponry in their gauntleted hands – The Slayer of Men wields an enormous, brutal barbed spear, Khamûl the Easterling clutches a mace and the Lingering Shadow holds not 1 but 2 swords. These miniatures are the perfect Hero units for an Evil army! 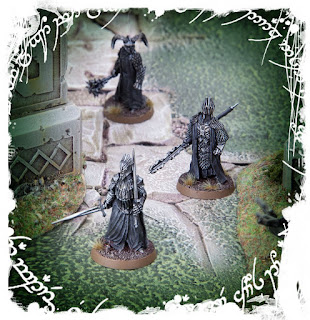