Comparing the Tau Drone to the Kataphron Battle Servitor 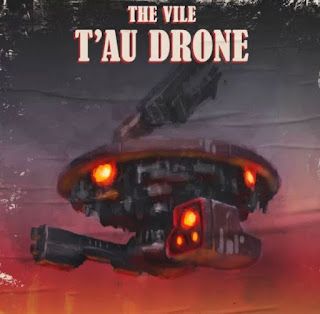 Quite awesome write up over on the Regimental Standard on how the Tau Drone will most likely lead to the downfall of the Tau Empire..... if the Imperium dont wipe them out first.

via the Regimental Standard
https://regimental-standard.com/2018/02/28/tech-heresies-of-the-tau-empire-drones/

Following your reassignment to the Damocles Gulf, it has been deemed necessary to provide an edifying course on the perfidious T’au in order to properly sharpen your hate, especially given the dishonourable tactics this race utilises.*

While their repulsive appearance and outdated political views should prove fuel enough for the forges of your fury, it is important not to forget the tech-heresy the T’au practice, releasing new versions of their war-machines helter-skelter, offering nary a prayer to the twisted machine spirits of their vehicles and dabbling in that most vile of the mechanical arts: the creation of Abominable Intelligences. Compare the so-called “drone” – a device that would doubtless eventually lead to the downfall of the T’au if the Imperium weren’t on course to finish purging them first – to the humble Kataphron Battle Servitor: 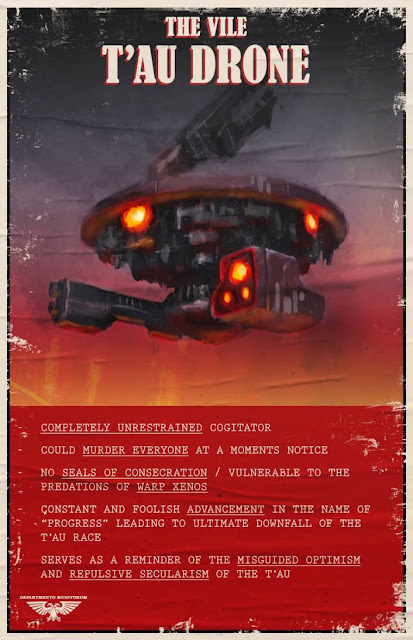 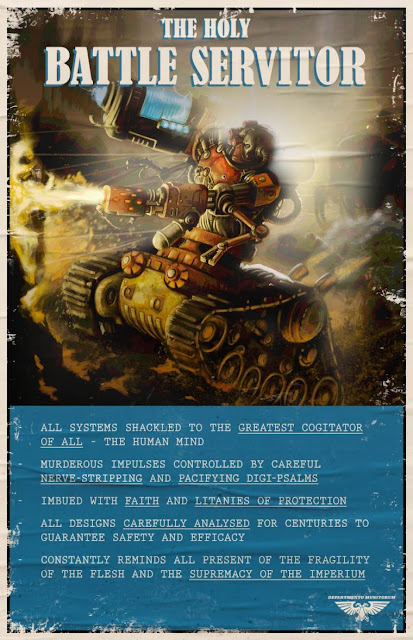 The distinction is clear, Guardsman – a “life” of dangerous “enlightenment” and “advancement” vs the safety of the traditions of the Imperium. Do not be fooled by the false promises of the T’au.