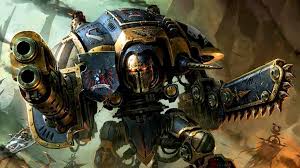 Nice, Rumors for the Imperial Knights. This looks very exciting.


via hermanista on Bolter and Chainsword
http://www.bolterandchainsword.com/topic/343659-ad-mech-vs-necrons-box-in-march/page-3#entry5004465
Praise the Omnissiah!
As I invoke the sacred texts and raise the memory banks... there are 4 knight boxes coming.

There's a Castellan
And another one that I think was called a Valiant which again may be the wrong name but is similar.
I think I saw they will rerelease Imperial Knight Renegade
And then you have a codex, datacards and I think dice, but don't quote me on that last bit.

It's a great time to be a Knight Senschal
:-)

New Knight revealed at LVO.
From what I've heard about this box the Knight could very well be part of it.

Knights - plural
In the box

I guess there is no new AdMech character, just the necron crypto for them.

No idea if there is any AdMech troops, I'd guess maybe not since finding out it's supposed to have two warglaives in there

Two warglaives is what I was told.

Things could have changed from the early lockups of the box set that were seen, so the source could be wrong. In which case I completely apologise for getting folks hopes up.

But they were adamant it was 2.

I'm hoping it is also, what with 6 knights and a fledgling necron army/conversion ideas for AdMech I'll love the box regardless.


I haven't been able to find anything related to any new releases using the word 'forgefire', where does that info come from?
Managers release schedule.
Forgefire (English)

That's like breaking news right? ;-)
I'm not confirming that's what it is, as the individual that showed me didn't notice it at first either when we looked through the schedule.

But it goes back to what I said earlier about it being similar to the blightwar box, and it's a similarly snappy name for a box set if it is the "battle for mars" set mentioned elsewhere


I think the amiger/helliger are separate boxes, but only a few weeks apart.

But again, I'm extrapolating from a quick look at a release schedule.

As I said elsewhere, I think we'll see the amiger/s in the box set and the Knight army release later


Is it confirmed that this is coming in March? Wasn't a boxed set expected for May according to that rumored release schedule?

The codex isn't the same time battle set afaik, some time after it.