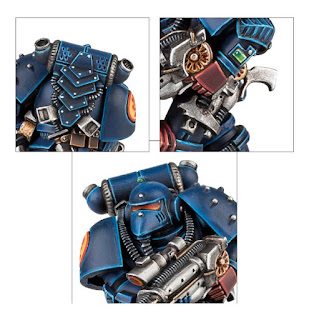 I wasnt expecting that we would get rules for the new 30th Year Anniversary Space Marine model, but apparently we are. He apparently comes with a Disintegration Gun that is less strength than a plasma gun, gets hots, and does instant death.


Here are an image of the rules, and a link to where you can see more.

This is the model,


and here is where and when you can get it.

https://www.games-workshop.com/en-US/Imperial-Space-Marine-2016
Description
THIS MODEL IS ONLY AVAILABLE ON THE WEEKEND OF THE 16th AND 17th APRIL.

Iconic soldiers of the Warhammer 40,000 universe, the Space Marines are recognisable to all. Slamming down from orbit in Drop Pods and unleashing hell onto the enemies of the Imperium, they are found in every corner of the galaxy, heroically battling evil wherever it is found in a desperate struggle for the very survival of mankind itself. As long as a single Space Marine draws breath, the Imperium of Man stands inviolable.

Games Workshop invites you to celebrate thirty years of Space Marines (yes, it really has been that long…) with this incredible, limited edition reimagining of the first ever Space Marine miniature! Armed with a disintegration pistol, disintegration combi-gun and combat blade, he comes with a Citadel 32mm Round base in a special presentation box, featuring his rules for deployment in games of Warhammer 40,000!

This model is strictly limited – once it’s gone, that’s it – so move quickly to ensure your own little piece of history!