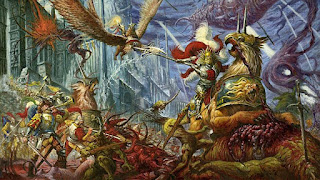 A couple small tidbits from discussions were sent in. This is from last week, but got lost in a quick shuffle. Here is a quick snippet about the Orc and Goblin vs Empire starter box for the Old World.
No Carry-over seems a little far fetched, but this is what the rumors are saying.
via an anonymous source on Faeit 212
source said every model should Get a remodel.
Hard to believe for me, Maybe GW dropping some Old Wars News this Weekend die LA Open.
regarding the new "starterbox Orcs & Goblings vs. Empire":
Yes. Everything will be new sculpts, there will be zero carry-over or
reprints of old stuff. Old models can be used, but loadouts won't
necessarily be the same.
regarding the FW Resin
I've heard the rumor about resin for everything outside the big
boxes from multiple sources, so I'd put my money on that being mostly
accurate.
1/24/2022
Natfka
Warhammer Rumors, Warhammer the Old World Rumors