Tzeentch Rumors and Rubrics Rumors to Check Out 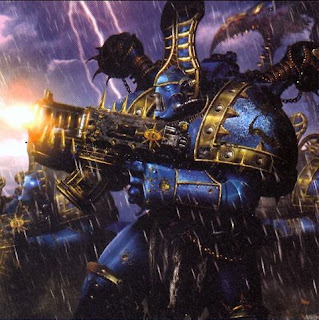 OK, feeling better now with some decent talk going on about Tzeentch and new Rubric Marines. I would love to see some new ones come out, and again new rules to get them on the tables.

via Sad Panda in response to this..
"I'm willing to bet that we won't see a CSM release in 2016. In fact, I'm willing to be wearing a Maple Leafs jersey for an entire week! (and I say this as a die hard Habs fan)"

If you think of a full new CSM Codex 7th Ed. with a full overhaul of rules and/or models, you're probably right.

If you mean absolutely nothing for Chaos Marines, you'll be wrong.

It is true that 2016 will have (among other things) a (mostly AoS) Tzeentch-theme running through it, similar to how 2015 had Khorne.

The reason there likely won't be a Tzeentch Daemonkin, is because GW is doing possible cross-overs a bit more deliberately than the written-over-a-weekend KDK.

That said, just about the only thing in a fairly impressive pipeline of (mostly AoS) Tzeentch that is NOT ready or even sculpted yet, is the LoC. If he comes, he'll be the tail end, possibly as late as 2017, not the kick-off to Tzeentch the way the Bloodthirster was for Khorne.

via Atia on Bolter and Chainsword
http://www.bolterandchainsword.com/topic/316968-sad-panda-replies-to-csm-talk-on-dakka/?p=4248315
I wouldn't say NO love for chaos ^^ Rubrics are always cool
Rubric Marines are done afaik