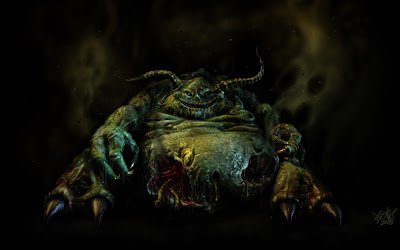 It looks like some serious point changes are coming to Daemons in the next couple months. This is a little expected and could even include daemons from the last White Dwarf update. We will see.

Daemons are already a strong codex, and hopefully this coming February's update gives us a nice update to keep them competitive.

via theDarkGeneral over at The Daemonic Legion
I have the gracious oppurtunity to glance over some of the new pix and pdf rules...

There will be many players i'm sure that will shun away from Daemons because of the obvious slant towards 40K ish models continuing to trickle in. There will also be a huge uproar from many Daemon players at the points change for MANY units...re-work on spells and much broader range on Magic Standards does help us.

Without saying too much more (and thus throwing up red-flags) I will say that I'm only slightly disappointed in it, rules wise.

New Bloodthirster and Great Unclean One look SICK!!!! However I'm still under the impression from "friends" that we won't see some of the new plastic Greater Daemons 'til closer to summer.
12/28/2012
Natfka
40k, 6th Edition, Chaos Daemons, Daemons of Chaos, Rumors, Warhammer 40k