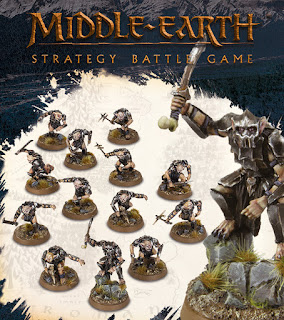 While these guys are specifically for the Hobbit, they are cool enough models to be used for many games. I like them a lot and they may just be on my list to pick up eventually. 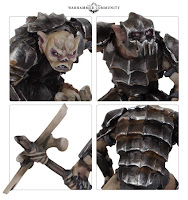 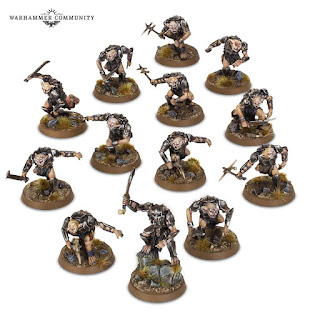 Following the death of the Goblin King at the hands of Thorin's Company, the Goblins of Goblin Town have joined Azog's forces at the Battle of the Five Armies. Eager to avenge their fallen king, these mercenaries have been provided with better equipment than that of the Goblins still in Goblin Town and can arrive at the battle seemingly from out of nowhere. The promise of revenge was enough to convince their leaders to take up arms against the Dwarves. Life in the Misty Mountains has made the captains of the Goblin Mercenaries more cunning than those they command, able to launch ambushes from seemingly impossible situations.

This multi-part resin kit contains the components necessary to assemble 13 Goblins – 12 Mercenaries and a Mercenary Captain. Wiry and misshapen, the Goblin Mercenaries are at the very least a little more well-equipped than standard Goblins; their horrid boils and spindly limbs are for the most part encased in armour, with plates, spikes and buckles on their legs, arms and chests. Each can be armed with your choice of sword – these are vicious, serrated blades more suited to bludgeoning than subtle swordplay – or bone pick, which consist of sharp bones lashed together on a wooden stave with thick cord. The Captain can be distinguished by his sinister full-face helm; included is a scenic base for him to stand on, depicting a rocky outcrop.

This kit comes as 66 components, and is supplied with 13 25mm round bases. Rules can be found in The Hobbit: Motion Picture Trilogy™ There and Back Again.