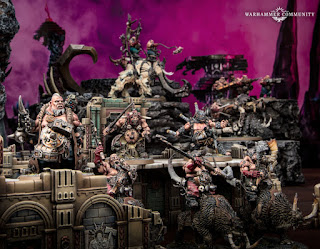 Coming to pre-orders tomorrow morning we have the Ogor Mawtribes and all their subfactions that are available within the battletome. Here is a Preview


via the Warhammer Community
https://www.warhammer-community.com/2019/10/25/ogor-mawtribes-the-sub-factionsgw-homepage-post-2/

Battletome: Ogor Mawtribes brings both the Gutbusters and Beastclaw Raiders together in one destructive horde, adding sub-factions to give your army it’s own… flavour. They’re called Mawtribes and they offer a huge variety of play styles and army builds.

These ogors roam the Mortal Realms in nomadic groups called warglutts, ever in search of something to fill their bellies. They consume absolutely everything in their path before moving on, locked in an endless cycle they call the Mawpath. 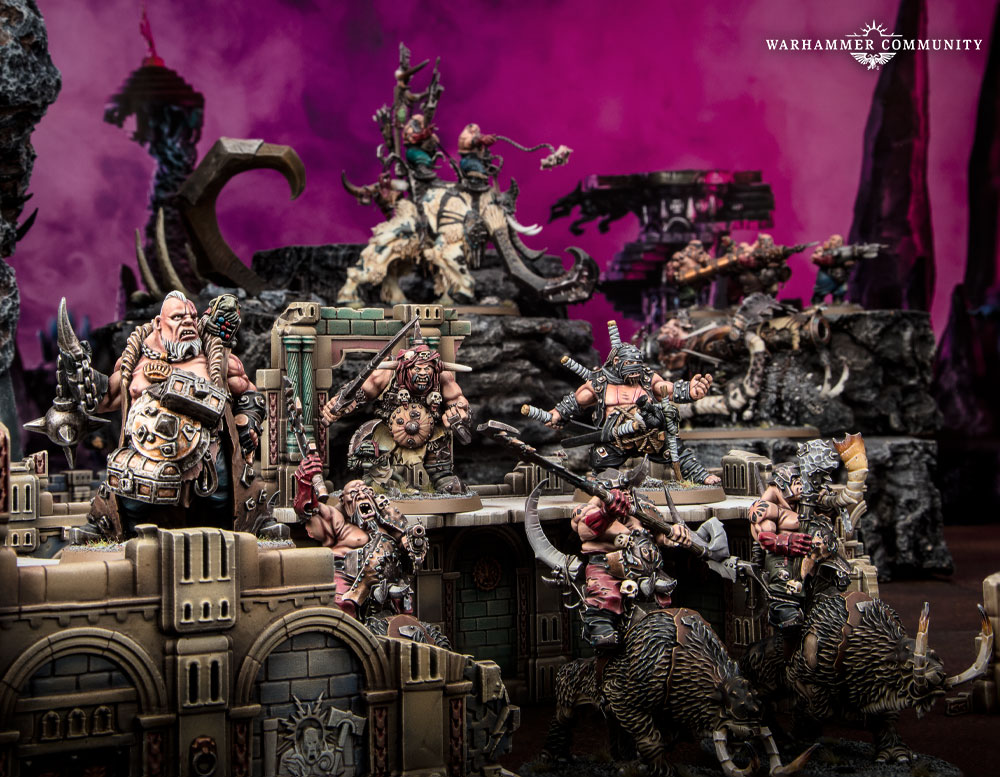 The most numerous of the Mawtribes, comprising massive roving camps of foot-slogging Ogor Gluttons. They’re some of the fiercest and fattest of all the Mawtribes, driven by their leaders to consume their enemies whole.

Speaking of their leaders, they consider themselves keen and sharp-witted, at least when they’re not starving…

If you want to harness the sheer brutality of ogors with an infantry-heavy army, the Meatfist Mawtribe rewards you for getting stuck in with minimal fuss.

For the ogors of the Mortal Realms, eating raw flesh and drinking blood act as prayers to the Gulping God, empowering the gastromantic energy of their dark shamans. None amongst the Mawtribes are more adept at Gutmagic than the Bloodgullet.

This Mawtribe also has access to the Splatter-cleaver, an Artefact of Power that boosts the healing power of Butchers to new heights.

The Bloodgullet are the most reliable of all the Mawtribes, boosting the natural abilities of Ogor Gluttons with re-rolls, and offering boons to healers like Butchers to make them even tougher. If you plan to stick around for dessert, bring the Bloodgullet.

Bursting forth from deep caves, pale-skinned and stinking of sulphur and gunpowder, the Underguts come searching for tasty surface-dwellers. Preferring their meat in blasted, steaming chunks, they tote heavy cannons like children’s playthings.

The Leadbelchers of the Underguts Mawtribe are renowned for accurate fire, even at long range. Combined with the extra attacks, from a distance they’re the most lethal ogors, allowing them to soften up melee-heavy enemies before finishing the job up close.

If you prefer a gunline army that’s equally comfortable bludgeoning their opponents to death, the Underguts are a fantastic choice. Their play style is unusual for ogors, so your enemy might not expect such solid results in your shooting phase. 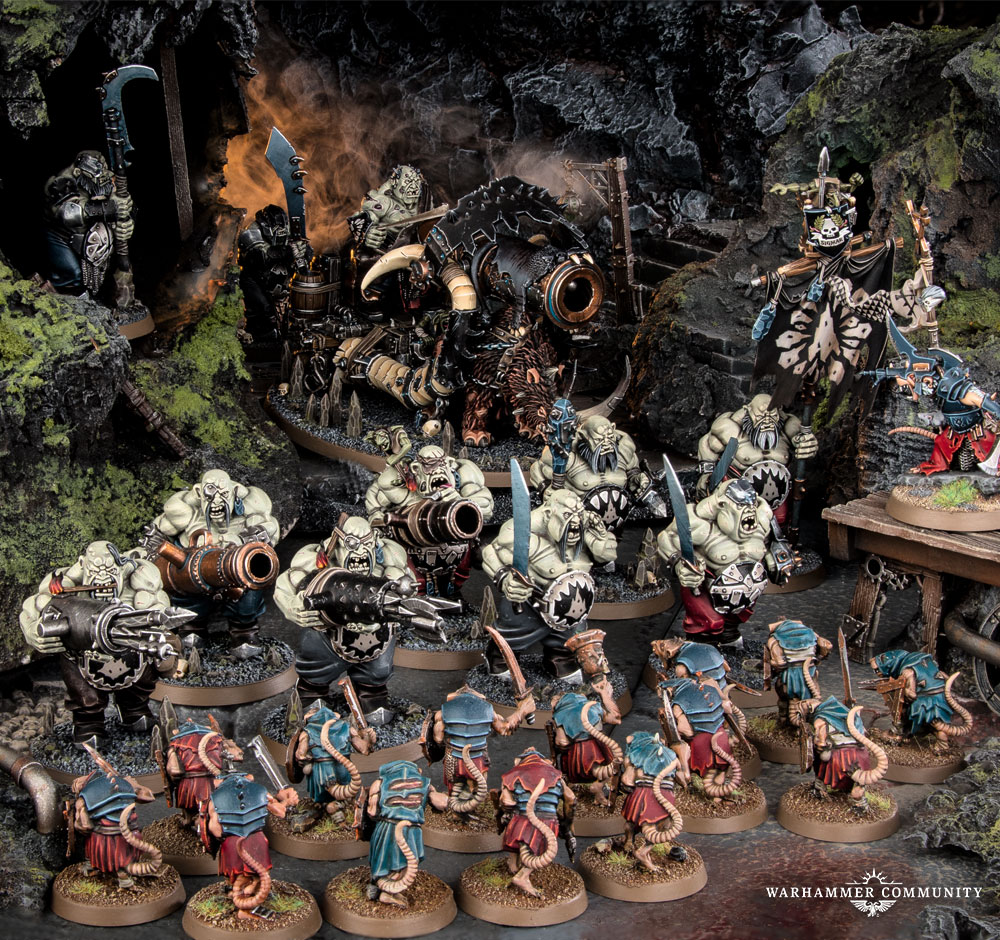 The ogors hailing from the frozen wastes are constantly followed by a magical freezing storm called the Everwinter, chilling their foes to the bone. Staying ahead of the storm upon the backs of beasts as large and nasty as they are, the ogors of the Beastclaw Raiders survive – and thrive – in the harshest conditions. 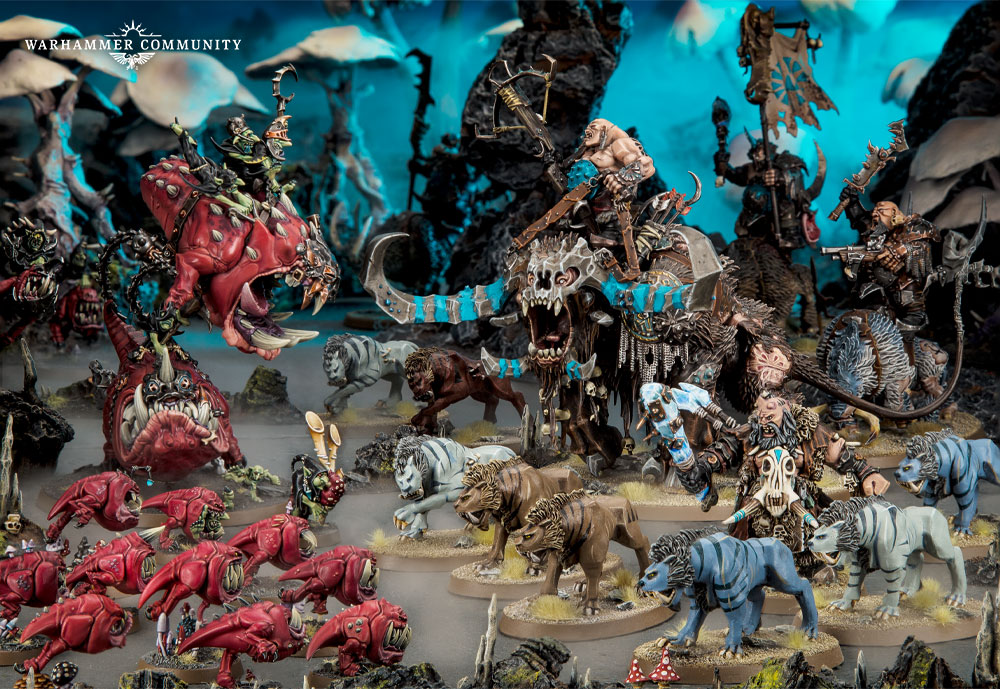 The Boulderhead are unmatched beastmasters known for excessive cruelty even by the standards of other ogors. Their cavalry charge into battle in a mass of swinging horns, stamping hooves and slavering jaws. They keep only the toughest and most foul-tempered beasts, pitting them against each other in vicious blood-games until only the strongest remain.

The monstrous mounts of the Beastclaw Raiders, while incredibly powerful, become weaker as they take damage. Those from the Boulderhead are able to push through their pain, given a bit of “inspiration”.

If you love the thought of nigh-unstoppable behemoths steamrolling everything in their path, the Boulderhead Mawtribe is for you. It will require massive amounts of punishment to take down the biggest beasts you bring to bear.

Hailing from the Sky Roads of Chamon, these ogors crave reckless speed over brute force, though there’s no shortage of the latter. Sallying forth in massive tight-knit hunting packs, these ogors strike with the force and speed of the lightning that ravages their homelands.

Thunderbellies Heroes are able to protect their vulnerable flanks by utilising the fulminating energy of the storm to turn the very battlefield against their enemies.

Their bellicose mounts are faster than those of other Ogor Mawtribes. If you’re looking for an army with a distinctive theme that can outmanoeuvre your opponents, the Thunderbellies are where it’s at. 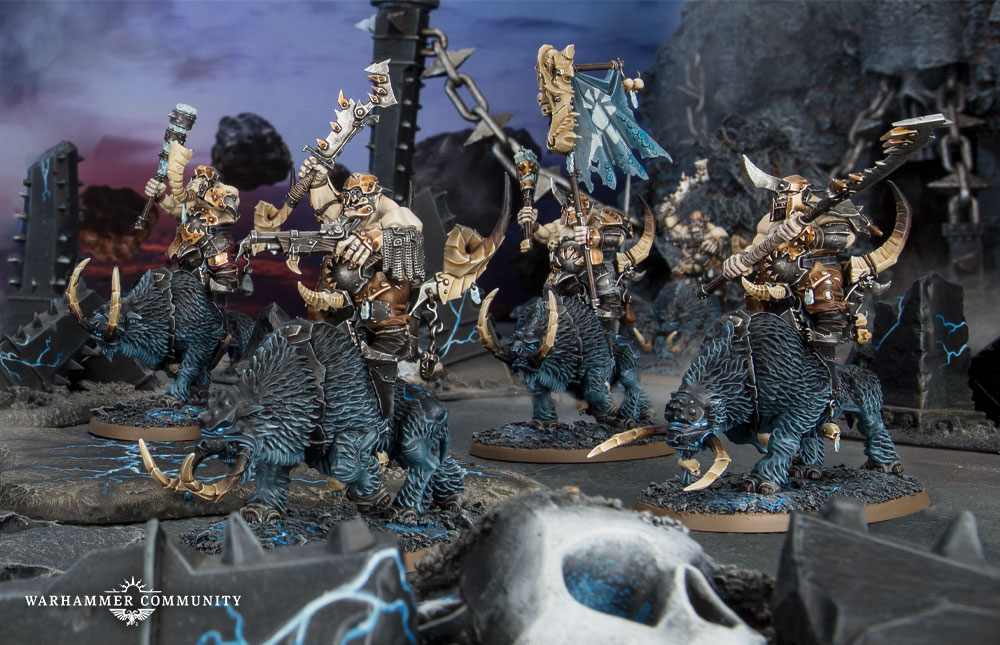 Embracing the unrelenting fury of the Everwinter, the Winterbite Mawtribe uses the storm to mask their movements. From the shroud of blinding snow, they conduct ambushes instead of overwhelming their prey as many other ogors would do.

The Frost Sabres and Icefall Yhetees of the Winterbite are especially deadly when led by a Hero, striking from the storm before the enemy knows what hit them.

Those Heroes also have access to Frostfang, an Artefact of Power that grows more powerful as the storm rages on.

The Winter Mawtribe is a fine choice if you prefer a little more subtlety, or enjoy the more exotic choices of the Beastclaw Raiders.