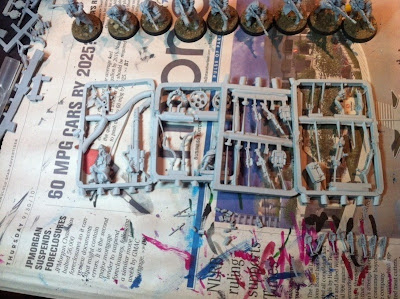 Believe it or not, they may have just did it selectively, possibly for testing. Check out the pic of the Krieg Lascannon team that a Forgeworld customer received.

So this customer received a Krieg Lascannon team in finecast resin, and on Facebook Forgeworld responded that they trialed finecast resin on some small batches. So the question remains, is the Forgeworld writer on facebook just covering up a trial of what may be a change in resins in the near future?

via UberBeast who recieved the order.
In a recent order from Forgeworld I received a krieg lascannon team that was resculpted and cast in finecast resin. The order had been for a Heavy Bolter, but the actual model in the bag ended up being this lascannon despite the paper instructions saying it was a HB.

Response from Forgeworld found by Eldargal on Facebook
From the FW Facebook page:
Finecast resin is not Forge World resin. While both are a two-part resin mix, Finecast with its additional 'flex' isn't suitable for manufacturing most of the FW range, although many of the techniques were trialed on some of our smaller kits such as heavy weapons teams. The customers in question have probably just received one of these kits.
11/18/2011
Natfka
Forgeworld