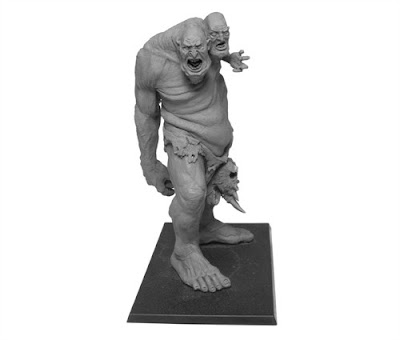 New from Warhammer Forge today is the Curs'd Ettin. Here is the latest with a link to place your order or view more pics.
http://www.forgeworld.co.uk/New_Stuff/CURSD-ETTIN.html

via Warhammer Forge
Renowned in dread Norscan sagas, the twin-headed, hulking Ettins are terrors of the high places. They dwell in lonely caverns and shattered citadels, splattered with the blood of their victims and carrying their stigma as a curse under whose torment they are bound to eternally suffer, despising all else that walks or crawls in the world.

While of a similar stature to the lumbering giants of the Old World, a Curs’d Ettin can be easily identified by its singular deformities and cruel intellect; born so it is said of an ancient treachery against the Dark Gods themselves, for whom they reserve their most bitter hatred.

The Curs’d Ettin, designed by Edgar Skomorowski, is a full resin monster packed with amazing detail, from its grotesquely twisted form to the jagged chunk of warpstone clutched in one hand as a primitive weapon. The Curs’d Ettin is available to pre-order now for despatch in the week commencing 28th November, and experimental rules for this rapacious creature are available to download now, taken from the forthcoming Warhammer Forge Monstrous Arcana expansion book.
11/25/2011
Natfka
Warhammer Forge