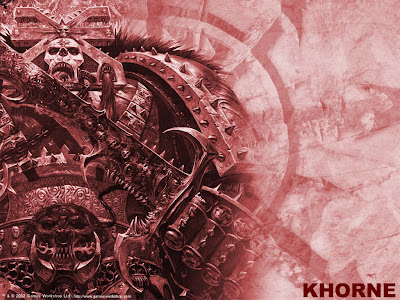 It seems like the rumors coming for the future Chaos Legions book are just coming and coming. Perhaps this is because it is what people want, but it baffles me that we are not hearing more Tau and Black Templar (assuming they really are coming early next year).

Either way, I still love hearing new Chaos Legions rumors. They definitely will be my next "new" army.


Please take with the standard salt. Rumors are rumors until we have codex in hand.

theDarkGeneral
I'm glad ghost21 was able to confirm my early reply about Warsmiths and Dark Apostles, and World Eaters w/Bolters...

*Slaughterfiends from Apoc will make their way into the Codex, along with versions for "Marked" type ones for other Legions.

*Unit size changes: Oblitz can come in up to 4, while most Daemon Engines can be 3 for 1...

*New Landraider: So we no longer have to suffer with just the old crumby one, has a higher capacity (15?) but is more of "warped" version of one of the Imperial versions.

*Force Org Chart: As ghost21 has alluded to, it won't change according to your Legion (HQs) as in swapping more Heavies for less Fast, but your access to units in those categories opens up, becomes limited, or closes off accordingly. Easy example I was given, is taking Khorne Daemon Prince means no Scouts...

I mean there is to be a "scout unit", but no associated with the World Eaters.

And as Brother Dimetrius has already mentioned, Cypher indeed was a Chaos model, and appeared in at least one of our previous Codexes. Could that mean a hint at Dark Angels around the bend? I think that'd be very cool, especially considering they are the FIRST Legion...

*Nightlords: I don't ask much about them, though a lil' i have for my buddy Paul has around 25,000+ points of them...Hit & Run and Stealth for universal special rules, but possible counter attack (for elite unit) as well as jump pack troops.

*Possessed: FINALLY getting some love, and according to Legion, they will have upgrades either already included or that you can pay for.

*Word Bearers: Apparently getting a lil' extra attention, and besides Dark Apostles, new models for "daemonancers", which just might be unit champs/sgt upgrades. I'm not sure. BUT, their summoning of Daemons from the Warp apparently allows re-rolls on the scatter dice, as well as new mishap chart!

*Thousand Sons: AP3 bolters will be MUCH more useful under 6th Edition, and a couple new Psychic abilities, one of which (supposedly) can remove an entire enemy squad from the table on a failed stat test!

*Emperor's Children: Lash is finally changed to be more in line with Daemon version. More heavy weapons upgrade count for larger units. Better Bikes? Not sure what that means...


via Ghost21
there are downsides to chaos units, nurgle cant do sweeping advances(i think thats what there called, n are stoic ), khorne has to engage in some kind of combat every turn or suffer a d6 result, tzzench (sp, ooooh i hate that word)are mindless automatons, who need a command figure or suffer a d6 result to guide there actions, and slaanesh well lets say they have very harsh results

as ive said, it will probably be the first or second 6th ed book, 6th ed is slated for jully i think (but also i have bb then... so i dunno), so anything upto 4 months after that (n this is the Legions book, not the renegades)
11/22/2011
Natfka
Chaos Space Marines , Rumors