Abaddon vs Calgar.... A super fun match up! 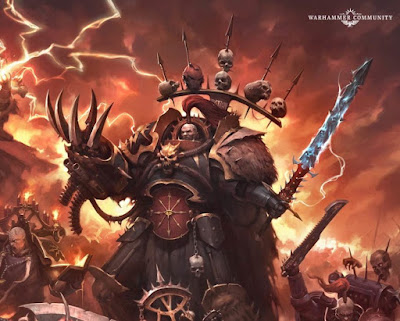 Pitting up Marneus Calgar vs Abaddon the Despoiler is a fantasy match up that will be exciting to see on the tabletop coming soon with the new Abaddon model coming soon. Im certain this will play out across our wargaming community many times, and today the Warhammer Community is feeding the fire..... Here is what they have to say.

via the Warhammer Community
https://www.warhammer-community.com/2019/03/14/mar-14-war-zone-vigilus-abaddon-vs-calgargw-homepage-post-2/

With Vigilus Ablaze on the near horizon and the events in the escalating conflict coming to a head, we’re taking a look at the main antagonist and protagonist of the story’s climactic final chapter. What circumstances drew both Abaddon the Despoiler and Marneus Calgar – two of the 41st Millennium’s mightiest commanders – to Vigilus, and who will emerge triumphant should they meet in battle?

Warmaster of Chaos, Lord of the Black Legion
There are few more infamous beings in the galaxy than Abaddon the Despoiler. From his earliest days as First Captain of the Luna Wolves, he was renowned for his skill and ferocity in battle. Now he stands as the undisputed master of the Traitor Legions, having won the favour of the Daemon Primarchs and Chaos Gods alike. His authority is absolute and his deeds are steeped in dark legend. 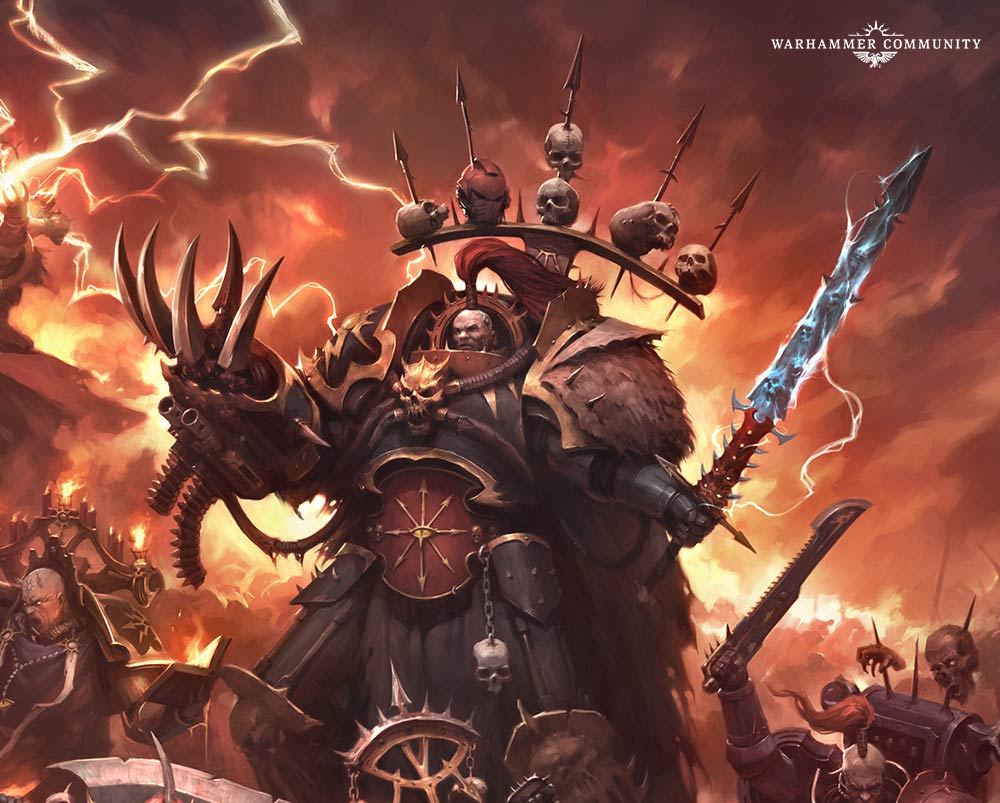 12 times the Warmaster has led Black Crusades against the Imperium, each campaign taking a terrible toll on the systems around the Eye of Terror. The 13th Black Crusade – now known as the Fall of Cadia, after the indomitable bastion world was finally overcome – marked the Despoiler’s greatest triumph and the culmination of all of his previous efforts. 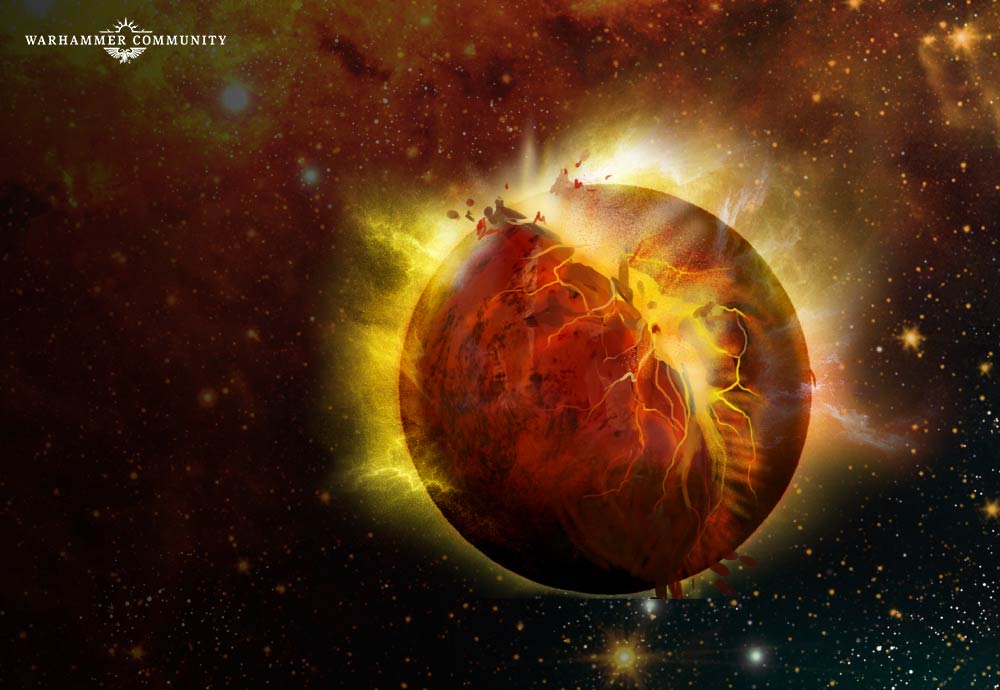 Yet the destruction of Cadia was merely a catalyst for Abaddon’s true goal. A vast rift in reality was torn across the length of the galaxy as an intricate network of ancient pylons designed to hold the warp in check finally came undone. So was born the Cicatrix Maledictum, and half the Imperium was isolated from the guiding light of the Astronomican. Having cruelly preyed upon the vulnerable worlds of what became known as the Imperium Nihulus, Abaddon has now turned his sights on Vigilus, which stands sentinel over one of the few stable routes through the Great Rift – the Nachmund Gauntlet.
In over ten millennia of war, hundreds of worlds have fallen before the Warmaster. Why should Vigilus be any different?

Lord Macragge, Chapter Master of the Ultramarines
For more than 300 years, Marneus Calgar has led the Ultramarines in the defence of the Imperium. During that time, he has cast down fell Daemons, slain traitors beyond count and even hurled back a Tyranid Hive Fleet from his home world – his tally of victories is quite remarkable. Though his strategic brilliance is legendary across the Imperium, he is also a warrior of great renown, having triumphed over one of Khorne’s Exalted Bloodthirsters and an Avatar of Khaine in personal combat, and even held his own against the Swarmlord at the Battle of Cold Steel Ridge. 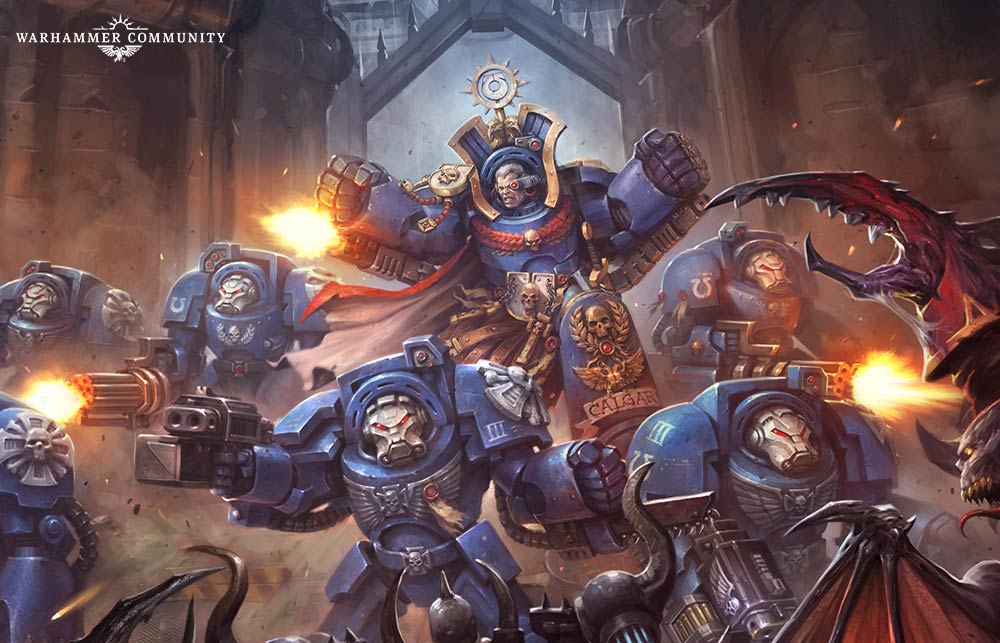 It seems fitting that such a storied hero as Marneus Calgar was the first Space Marine to cross the Rubicon Primaris. Marneus Calgar is now stronger than ever and clad in a masterwork suit of Mk X Gravis plate known as the Armour of Heraclus. If ever there were a mortal champion that could defeat the Warmaster, it would be Marneus Calgar. 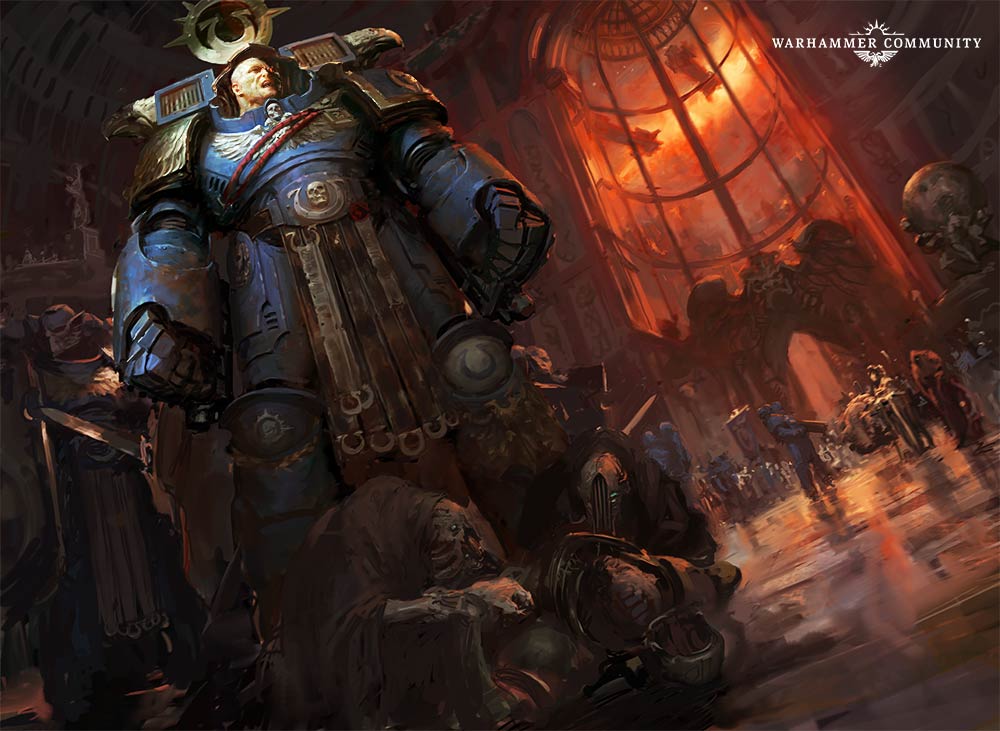 Marneus Calgar is leading the defence of Vigilus, and marshaling its embattled forces to stand against the approaching Warmaster. Roboute Guilliman himself has declared that the sentinel world must not fall, and Marneus Calgar has sworn a mighty oath not to fail his Primarch.

Now that we’ve introduced the two rivals, let’s take a closer look at what may well give them the edge in the next chapter of the fighting on Vigilus…

Having engineered an ingenious plan that reached fruition over ten millennia, Abaddon is the undisputed master of the long game. By contrast, Marneus Calgar is well versed in adapting to circumstances as they unfold and turning them to his advantage. Given the rapidly evolving nature of the war on Vigilus and Calgar’s current (albeit tenuous) control of the embattled world, we give the advantage to the Lord Macragge. 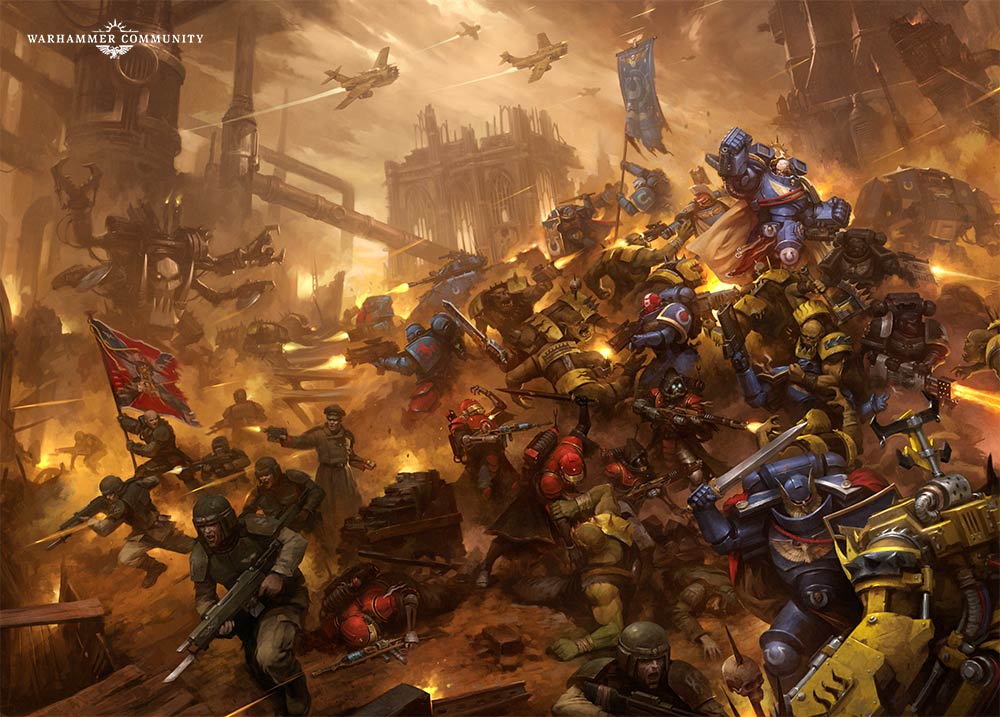 Naval reinforcements have been steadily trickling in-system as more and more Imperial forces joined in the defence of Vigilus, but Abaddon has arrived aboard the mighty Vengeful Spirit at the head of a huge fleet that vastly outnumbers and outclasses the Imperial flotilla. The Warmaster has the clear edge here. 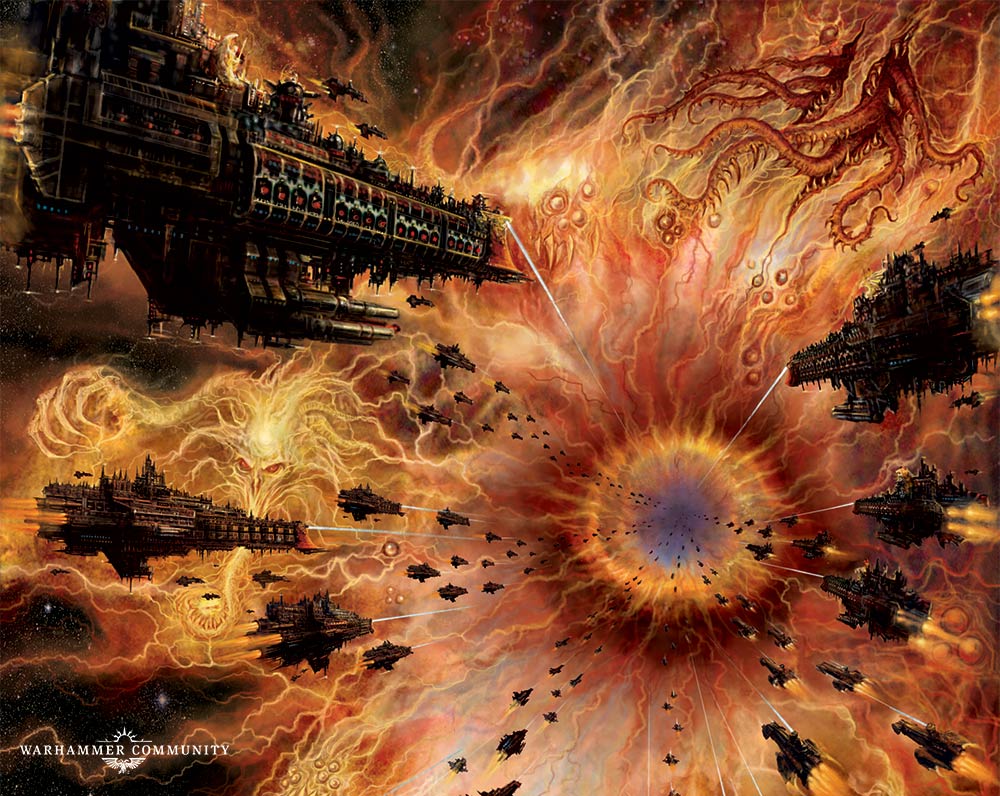 Both Marneus Calgar and Abaddon have triumphed in (or at least survived!) many epic duels with powerful adversaries, so it would be difficult to pick an obvious winner. However, despite the fact that Lord Macragge is clad in potent new armour and bears the fabled Gauntlets of Ultramar, the Warmaster wields two of the deadliest weapons in existence – the Daemon blade Drach’nyen and the dreaded Talon of Horus. Were they to face each other in battle, Abaddon’s unholy wargear may just give him the edge. 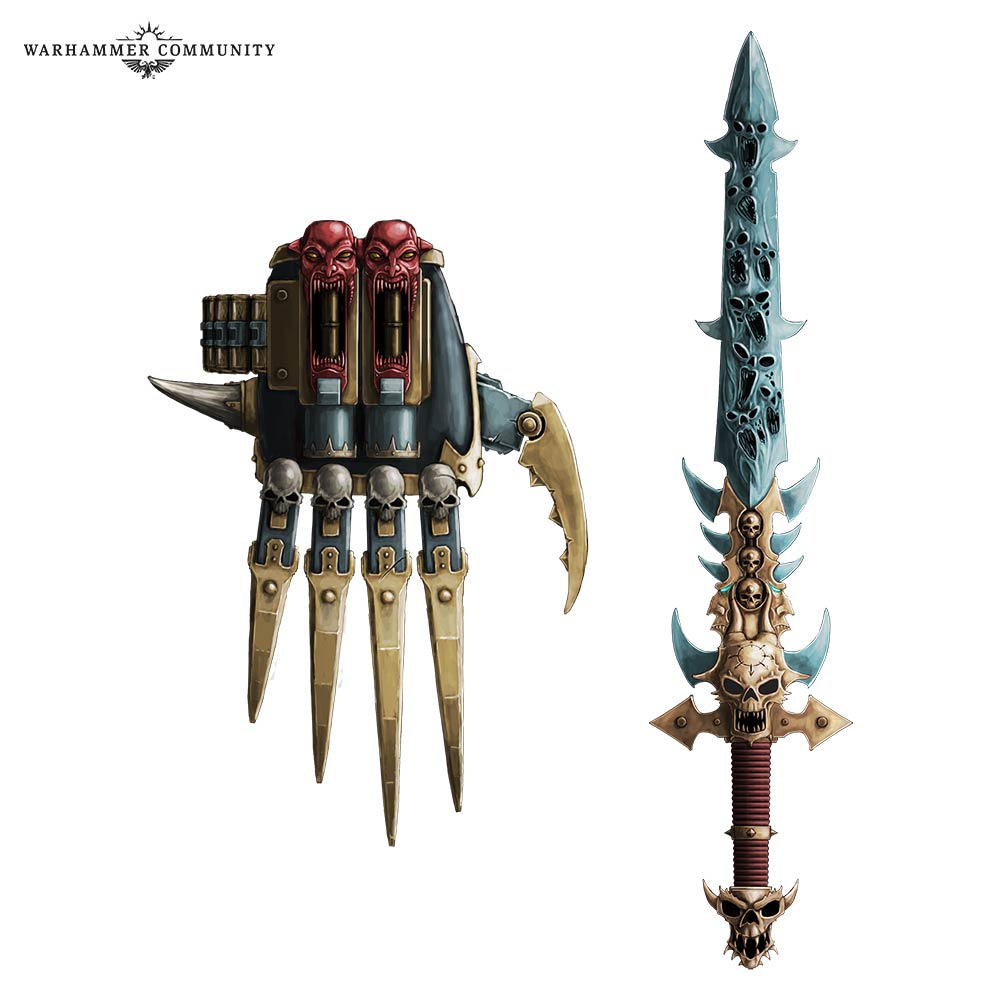