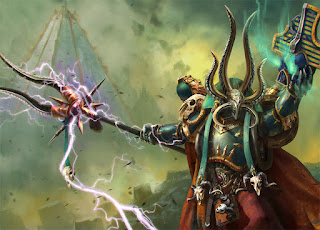 The Warhammer is preparing us for tomorrows release with a little rundown of just who these new Thousand Sons are. A few of Exalted Sorcerers are being portrayed as being able to dominate the Psychic Phase. Check out the latest below.

via the Warhammer Community
https://www.warhammer-community.com/2016/11/25/looking-forward-to-wrath-of-magnus-thousand-sons/ 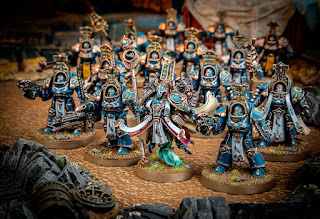 Each one is more powerful than a Space Marine Librarian, and rightfully so, these warrior mystics are steeped in 10,000 years of Warp-acquired arcane lore, and each is the master of a dread Silver Tower of Tzeentch.

In the game, an army with a few Exalted Sorcerers is going to dominate the psychic phase, especially alongside the Aspiring Sorcerers that lead every Thousand Sons squad of Rubric Marines. They have a few options, from Discs of Tzeentch to a range of new Artefacts, and they are included in several Formations that further augment their magical supremacy. 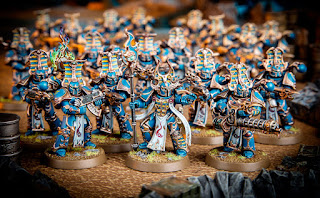 The basic troops of the Thousand Sons (if such a term can be used), each is a walking suit of ancient armour compelled by the vengeful spirit of it’s former occupant…and a bit of dust.

There are quite a few changes to this unit’s rules, not least of which are their, now expanded, weapon options. As you might expect, all of these are in some way sorcerously-powered, from the warpflamers that the entire squad can be equipped with (!) to the deadly soulreaper cannon, which can mow-down even power armoured foes with ease.

Scarab Occult Terminators
Still bearing the name they took during the Great Crusade 10,000 years back, the elite of the Thousand Sons are – if anything – more deadly than when they still drew breath.

The unit has inferno combi-bolters as standard, but can be further boosted with heavy warpflamers, soulrepaer cannons and hellfyre missile packs, making them one of the most deadly ranged units available to a Chaos Space Marines player.

The Sorcerer leading the unit is a powerful psyker in his own right (note: not an Aspiring Sorcerer, a full on bona-fide Sorcerer). With a Mastery Level of 2, and access to 11 psychic disciplines, he adds a lot of flexibility to how this squad can function in your army.

And that’s only the start – also in the book are new detachments and Formations, psychic powers, Warlord Traits, artefacts, objectives, missions and more.

All these new models, and the new Wrath of Magnus book, are available to order tomorrow morning, wherever you are in the world.
11/25/2016
Natfka
40k, Chaos Space Marines, News Headlines, Warhammer 40k