Great Preview on the Wrath of Magnus 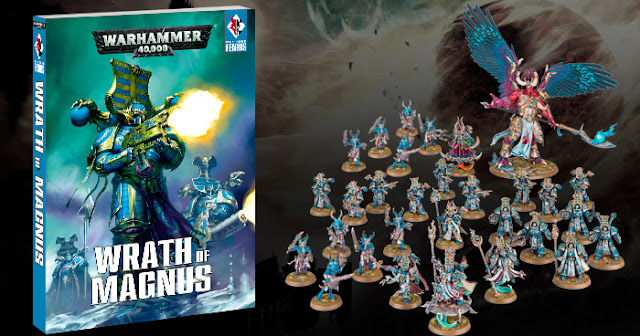 Here is the first real solid and great reports coming on the Wrath of Magnus book that is up for pre-orders shortly!


via- Veterannoob from Combat Phase Podcast
To follow for additional info, check back here or jump on over to dakka
http://www.dakkadakka.com/dakkaforum/posts/list/1800/705017.page

Just real quick,
CSM can be TS and treated in all ways as CSM w/following modifications:
1. no rare unites besides Ahriman and Big Red
2. If can take Mk Tz they must
3. Units w/Mk of other 3 gods can't play our reindeer games
4. all units that can be upgraded to VotLW must at no cost.
5. any demon princes must have demon of Tz
6. psykers from the detachment can choose to generate all of their powers from new Tzeentch discipline (primaris + 6)

then they'd benefit from the 3 TS detachment/formation rules

OK...first part, fluff coming in a bit. I need to eat still. But here ya go for rules! ...spoiler: the fluff is cool, imo smile.png

Combat Phase podcast will be happy to cover the new Thousand Sons soon. But in the meantime this is the initial text review of Warzone Fenris 2: Wrath of Magnus. The hardcover case comes with a fluff book and a rule book so you can build your own themed Thousand Sons army or Tzeentch demons army. It’s worth the $75 USD every bit. Amazing art, a stunning new line of models which I honestly did not expect. Sadly the website is old so episodes are on iTunes or @kennylull on twitter or www.facebook.com/combatphase and episodes go up every week. Check out over 50 episodes with Black Library and the most recent ep. 172 an interview with the man himself, Aaron Dembski-Bowden on Master of Mankind, the Black Legion series, his books, writing styles, and what’s to come. Direct link:

"Rules:
For someone loving the fluff of the Thousand Sons (TS) and now becoming a first-time CSM player this book is amazing. I can’t say with any certainty on this, the day of pre-release in Nov., how the Traitor’s Legion book (resale Dec 3) will address TS but I have faith in Tzeentch that it will at the worst mirror this and at the best, grant options for TS fans/players of 30K & 40K—but that’s just my educated guess. ;)

OK, so how does this work? Kickass models—stunning and a wider selection than I could have imagined—accompany new paints to build your TS collection. Demons do NOT have any new model kit releases at this time. However, blue horrors and brimstone horrors (they’re so darn cute!) are available in Warhammer Quest: Silver Tower (WHQ) where you may want to look at your local GW or FLGS or online to buy, trade, or make dark pacts to acquire some. Though not confirmed, I am under the impression early in 2017 we’ll see these models boxed to be used in 40K & AoS. The Tzaangor kit has a nice selection of bits; don’t bother trying to mix WHQ Tzaangors into your 40K army, imo, just get the 40K kit and you can use those for AoS. Rubric marines make a gorgeous kit. Datasheets have units of 5 (4 + 1 aspiring sorcerer as infantry character) so the box can make the asp sorcerer + 9 marines, equipped with inferno boltguns or warp flamers. Soulreaper cannon and icon of flame…pretty. Oh, and a diverse CSM transfer sheet for other legions. Nice kit.
That’s all I have for models. Have a look on GW’s pre-order section for kit details and 360 view.

Making an army
These books are incredibly clear and perhaps that’s future-proofing in addition to an evolution of the design studio. You need CSM codex for TS and Demon codex for the Tzeentch demon army here. The TS are vicious psykers and that comes through quite clear in this WoMagnus supplement!
TS: This book contains new data sheets for Ahriman and Rubric Marines which replace their listings in the current CSM codex. The TS theme army is a Grand Coven (GC) which is made up of formations. Psykers get new and better powers and the CSM sorcerers can draw from 4 new disciplines: Sinistrum, Heretech, Ectomancy, Geomortis. We get 6 new objectives for TS focusing on psyker objectives mostly, or number 9. Also 3 cool fluffy altars of war. TS get 6 new relics, 6 new warlord traits (One gives eternal warrior!). CSM models can become TS with certain Tzeentchy condition to basically, ya know, make it work.

Special rules: detachment from CSM can become TS meeting rules (this book), then all units in a TS detachment or formation get 3 special rules (hells yeah, imo!)
1. if unit w/vet of long war (all TS except Tzaangors) affected by a blessing then invuln save better by 1 until start of your next psyker phase.
2. Units as above reroll hits every round of close combat vs. Space Wolves but also SW get hatred vs. TS
3. Rubricae becomes troops instead of elites
-Units from the formation can be in both a formation and detachment. You need your warlord in a GC as primary detachment to give the benefits to that whole primary detachment. Which is re-roll TS special warlord trait & re-roll the result of perils as well as all psykers can attempt to manifest one warp charge above their mastery level. So mastery 4 could attempt to manifest 5 powers!! Holy Psyker kickass, Batman! Oh, Eldar… ;-p
- GC is 1+ core; 0-4 command; 1+ auxiliary [TS Formations have cool benefit of re-rollingfailed saving throws of 1 when the formation uses max number of units allowed]
Core: War Cabal (formations either using healthy mix of the army) or Sehkmet Conclave (A badass Sorcerer + 3-9 scarab occult termies)
Command: Reharti, Ahriman’s Exiles, and Lord of the Legion
Aux: War Coven (magics!), Tzaangor Warherd (bray, baby!), Daemon engines (stuff from codex), and legion armory (codex armor vehicles)
Updated discipline of Tzeentch, 4 new disciplines.
designer notes new icon of flame reflects new changes since CSM codex, new inferno bolt weapons. Bolt + mark Tz = soul blaze

Can’t spoil every data sheet but some highlights:
- Ahriman at 230 HQ (rubric become troops if he’s in the army), can take a disc, psyk 4: Bio, Deamon (malefic), divination, ectomancy, geomortis, heretics, pyro, sinistrum, telekinesis, telepathy, tzeentch [The 11] and he still has Master of Deception warlord trait.
-Exalted sorcerer 160, can take disc, Pyk 2, same 11 powers, 1/per game Coruscating Beam attack instead of shooting (unlimited,S9, AP2, Heavy 1, blast, lance)
-Tzaangors 10 w/mk Tzeentch, can swap 2 hand weapons for auto pistol & chainsword, can take up to unit 30, 7pts each. relic hunter rule for fluff in case rare instance of this comes up
-Rubric marines unit 5 (4+ aspiring sorcerer), same special rules but better weapon options now. aura of dark glory, sorcery force stav, uses Tzeentch spells, can take up to 20 (23 pts each), any # of warpflamers (7 pts), sorcerer can take meltabomb, icon, gift, rhino. 1 soul reaper cannon per 10 marines (25 pts).
-Scarab occult terms 5 (4 + sorcerer) sorcerer has WS 5, 2 wounds- 1 above normal troops, and cast 11 disciplines. units can be 10 (40/model), heavy weapon options per every 5; per 5 one hellfire missile rack, land raider road trip available:)
-Magnus is a beast at 650 points but he has some crazy powers. psyk 5, draws line of sight to any model on the battlefield, harnesses charges on 2+, never perils, 4+ invuln, and besides knowing all Tzeentch & Change spells he has that Gaze you heard about, charge 5 (but remember all bonuses TS get!) 18’ D, Ap 1, assault 1, soulblaze! His staff is S user, AP2, force, soul blaze and transmogrify. Hot.

—so as with making the TS army, it’s all about formations and besides re-rolling saves of 1, they are reflections of fluff in names and benefits. As the Rehati should be from the HH novel A Thousand Sons (by Graham MacNeill), this expensive sect can harness on 3+ and draw line of sight anywhere. Makes me happy! War cabals of rubrics and terms; war covens of sorcerers; herds of tzaangors and a sekhmet conclave of terms + sorcerers.

Demons
Also 3 alter of war, 6 new fluffy tactical objectives, a new Tzeentch warp storm chart if your warlord is in the primary detachment (like TS model for creating a battle-forged army above)
Pink Horrors here replace the ones from the Demons codex. 90 for 10, up to 20 (9 pts/each). 1 is iridescent horror who can take 20 pts of rewards combination) and take choice of icons and icon upgrades
Blue (50pts for 10) and brimstone horrors (30 pts for 10) have been added as units. Pink horrors die and split into 2 blue which die and split into brimstones if you have them. An awesome return to the game! One formation even doubles the amount of horrors spawned from their colorful kin. Horrors use Change discipline.

-contains new loci, transmogrification in this book replaces the one from the demons codex because horrors split differently now. Demons of Tzeentch can be demon of tzeentch detachments. Pink horrors can carry new icons as well.
-You make a Pandemoniad of Tzeentch as your primary detachment but for warlord traits you need WF 1: Curse of the Wulfen.
the Pandemoniad gives you 1 better invuln save to a max 3+ and you can reroll the warlord trait (from WF1) AND the tzeentch warp storm table.
Same as a GC in format.
-1+ Core - Warpflame Host, Lorestealer Host
-0-3 Command - Lord of Pandemonium or Omniscient Oracles (Kairos plus more Lords of Change to help the blind bastard actually see the present, lol!)
-1+ aux -[this is where the rest of your demons of tzeentch come in] Agents of Tzeentch, Forgehost (soul grinders), Burning Skyhost, Brimstone Conflaguraions and Groups of Heralds.

Scarab occult terminators:
300pts for 5, 50pts for each additional one. ws5, bs4, s4, t4, w2, i4, a2, ld10, 2+/4++
Leader has 3 wounds and 3 attacks.
Can sweeping advance.
Combi inferno bolters are same as inferno bolters but twin linked.
Heavy warpflamer is 10pts and is a strength 5 warpflamer.
Soulreaper cannon is same as above.
Hellfyre missile packs: dual profile- s4, ap3, small blast or s8 ap3. 20pts per model.